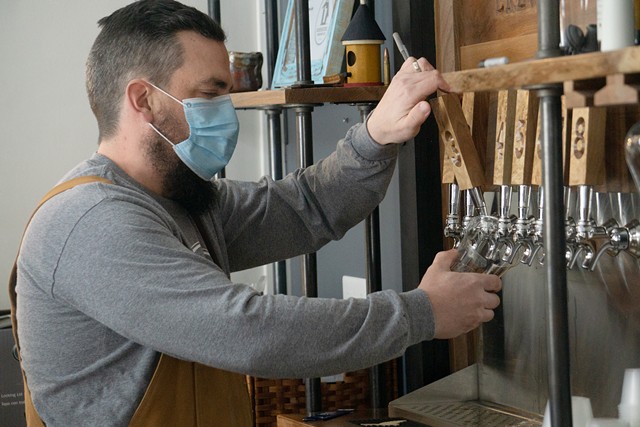 As much as St. Patrick’s Day is an Irish holiday, it is also very much a beer holiday, one in which sales of suds increase by 174 percent on average, according to a WalletHub report.

The American St. Patrick’s Day celebrates the culture of pub drinking, the all-day sipping sessions of the Emerald Isle’s low-alcohol, malty brews and the camaraderie that comes with it.

But for the second year in a row, COVID-19 has put a damper on traditional revelry.

“It really is sad,” said John Urlaub, owner of Rohrbach Brewing Company. “Not just as a brewery owner, but it’s part of who we are as Americans. I think social interaction is a key thing.”

Three Heads Brewing co-owner Geoff Dale lives for the opportunity to put on a good party, and St. Patrick’s Day offers one. Typically, Three Heads marks the holiday with its “Going Green” party, a reggae event that pays homage not to shamrocks, but to a different green plant.

The brewery will host the event virtually this year, just as it did for its January “Homegrown” birthday party, which it usually holds at Lovin’ Cup in Henrietta.

“You can either curl up in a fetal position, or you can adapt and have fun,” Dale said. “That’s what we’re doing, we’re dealing with the cards we’ve been dealt, and we’re going to make it work.”

While the St. Patrick’s Day parade won’t travel through downtown Rochester this year, and most Rochesterians will likely abstain from public partying, the beer is still flowing, and that alone is a reason to celebrate.

Irish styles such as red ales or dry stouts tend to be malty brews, light on the booze and heavy on bready, roasty, and caramel notes.

There’s a reason these beers don’t beat you over the head with alcohol like many American brews — like the United Kingdom, Ireland’s beer has historically been subject to an excise tax based on alcohol-by-volume, meaning stronger beers got dinged harder by the government.

Birdhouse Brewing in Honeoye pumps out a supreme example of this Irish-American love child with its Let 'em Go Red Ale. This beer packs a hefty dose of Cascade hops, sourced from Drumlin Farms in Bristol, giving it a pithy, bitter finish which compliments a sweet, caramel malt backbone. The ale has a modest 5 percent alcohol level, so drinking a couple of pints won’t mean an early end to the festivities.

Birdhouse opened in May 2020, well into the pandemic, and hasn’t yet been able to make full use of its roomy space in the Finger Lakes, a grist mill in a former life.

“We’ve been open the whole time during the pandemic, so for us, we don’t know any different,” said co-owner Greg Searles. “It’s definitely not what we expected.”

Birdhouse won’t get that crowd this St. Patrick’s Day, but the brewery owners hope that in the coming months life will return to a semblance of normalcy, bringing thirsty bar-goers back together to clink glasses, listen to some good bands, and put our beer culture back in motion.

“I really think that, once this is over and things start to open back up, we’ll see people coming out like we’ve never seen before,” Urlaub said.

A simple, delicate balance of caramel malt notes gives way to a nuanced finish of dried fruits and a crisp, herbal hop bite.

Bready malt sweetness shines in this simple, and traditional, take on Irish pub-style ales. Find notes of honey, caramel, and just a touch of floral hops on the tail-end.