For Parcel 5: a theater topped by apartments

April 07, 2017
Should Parcel 5 be developed for a theater or for housing and commercial use?

City officials announced this morning that if City Council approves, it’ll be both: a 3000-seat theater for the Rochester Broadway Theatre League’s shows with a 150-apartment building on top of it. The apartment portion will be handled by Morgan Communities, which has extensive housing development experience in downtown and the Greater Rochester area.

What Parcel 5 won’t be is a park-like open space set aside for events and temporary vendors such as food trucks. That proposal, called Visionary Square, had strong support from some activists but apparently wasn’t under serious consideration by city officials.

A long strip of open space behind Parcel 5 will remain as public green space.

Earlier this month, there were reports that city officials were ready to award Parcel 5 to Gallina Development for a 14-story tower housing commercial space and condominiums. That proposal and RBTL’s were the major proposals city officials were assessing; a plan from Morgan hadn't been in the mix.

RBTL has pushed for a new theater downtown for decades, but concerns about its funding, both for construction and for continuing operations, have persisted. RBTL CEO Arnie Rothschild announced recently that philanthropist Tom Golisano would commit $25 million toward a theater.  The possibility of combining the theater with housing seems to have interested Morgan and convinced City Hall.

Morgan's part of the development will include some "affordable" units along with market-rate apartments. There'll also be space for retail shops and restaurants on the street level. 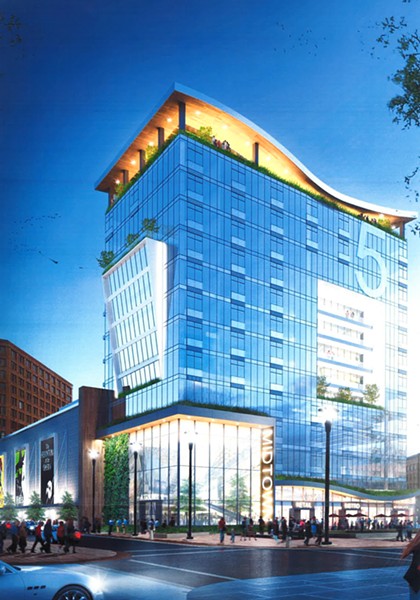 The development is expected to create 610 construction jobs, and the apartment complex and theater are expected to create 166 new permanent full-time jobs, says a press release from the city. The developers have agreed to give first preference in hiring to city residents, and to "work with any prospective commercial tenants" in the complex to give city residents first preference in their hiring, says the release.

In addition to bringing apartment residents downtown, the complex is expected to attract hundreds of thousands of theater-goers. Rothschild has said for years that a new, larger theater will permit it to host more shows. And he continues to insist that RBTL will maintain and host shows at the Auditorium Theatre, where it now stages its productions.

While today's announcement ends the suspense about the future of a key part of Parcel 5, it doesn't mean ground-breaking for the project is imminent. Financing is still being put together, for instance. According to the City Hall press release, city officials have been talking both with the developers and "a host of other potential funding sources." Given those discussions, the press release says, "the City is confident the project will have the funding needed to bring this project to completion."

"Once funding has been finalized," the release says, the city will move ahead with selling Parcel 5 to Morgan Communities and RBTL. Because the sale of public land is involved, that sale will need to be approved by City Council.