For 100 years, the Latimers have handled death for Rochester families

She often welcomes the grieving relatives of the deceased into her funeral home on South Plymouth Avenue the same way she has for decades, putting them at ease with an anecdote about herself that by now could be the worst-kept secret in the neighborhood.

The name everyone knows her by is actually a nickname she picked up in high school.

“I say to the family, ‘I’m going to be signing some paperwork, but I will not be signing it Monique Latimer,” she said. “They go, ‘What’s she talking about?’ And I’ll say, ‘I’m just going to sign it my real name — Maggie Lue.’

“And they laugh and then just sit back and relax,” she went on. “I don’t know why, but it seems to relax them. I do it all the time.”

A polished woman with a voice as tender as a lullaby, she spoke from her office off the foyer of Millard E. Latimer & Son Funeral Directors, which this year marked 100 years of handling deaths for families in Rochester, most of them Black.

She had run the funeral home with her husband, Millard E. Latimer Jr., for nearly 40 years until his death in 2011. She now oversees the operation with the help of some contract employees and family members.

The home, a three-story colonial at the corner of Fuller Place bedecked by white siding and black trim with an addition for funeral services, is thought to be the oldest Black-owned business in the city.

There, Latimer carries on a long tradition of Black funeral directors who hold an almost mythical stature in their communities for the compassion with which they handle bodies that, historically, many of their white counterparts would not.

In the process, she has preserved the Black mourning rituals of a Christian “homegoing.” Such funerals are imbued with pride and pageantry, and often include a lively service of songs and stories. The dead are typically on view in richly adorned open caskets and buried with mementos. Latimer has a practice of presenting each family with a Bible.

In a city whose Black population is disproportionately touched by poverty and the criminal justice system, Latimer has handled deaths of every sort — natural causes, illness, and products of violence. She has walked countless families through the steps of applying for funeral aid grants offered by Monroe County.

Her clients, many of them having relied on Latimer for generations, say her funeral home takes care to restore a dignity and respect to the deceased that sometimes eluded them in life.

“Black communities in particular spend a disproportionate amount of money on a funeral, but they see it as a ritual that is extremely important,” said Bill Johnson, the first Black mayor of Rochester, who has known the Latimer family for years and in August emceed a centennial celebration of the funeral home.

“They want to see the deceased on display and they want to see as close a likeness to that person as possible,” Johnson said. “Many (of the dead) have been injured, they were ill, their bodies were ravaged.

“The Black funeral director is actually schooled in dealing with those things,” he continued. “The reason I think Latimer has endured is because of that quality of service, that empathetic service.”

A CENTURY OF BEING THERE

For a century, Millard E. Latimer & Son Funeral Directors, or some incarnation of it, has seen the Black community in Rochester through many of its most trying moments.

Millard E. Latimer Sr. founded the business shortly upon becoming the first Black graduate of the former Syracuse School of Embalming and Sanitary Science in 1922.

He had relocated to Rochester five years earlier from his native South Carolina, where he was one of nine children. He found work as a porter and a service supervisor at the former Powers Hotel, according to his obituary, before recognizing the opportunity in the funeral business that awaited entrepreneurial Black men like him.

Latimer Sr. worked funerals for a time with a partner, but records show that he had his own funeral home a few years later and had opened on Clarissa Street by the end of the decade.

He and his wife, Lydia, who eventually obtained her undertaker’s license, raised their family in that funeral home, while handling the deaths of their neighbors.
“Pop was a strong Black man with a dream and obviously nothing was going to stop him,” Latimer said of her father-in-law.

Clarissa Street then was the cradle of a small but growing neighborhood of African-American families and entrepreneurs. The strip was home to thriving businesses that included Vallot’s Tavern, Gibson’s Hotel, The Pythodd jazz club, and Wilson’s Barbershop.

A Black funeral home not only held the community together in times of grief, it was a necessity. The funeral industry’s major trade association in 1912 excluded Black people from membership, and white funeral directors often refused to work on Black bodies.

Indeed, the business of burying the dead is still mostly segregated by custom.

“Most Caucasian funeral homes, although now they’re starting to, would not do Black people,” Latimer said. “The biggest segment of Black people running their own business are funeral homes. You’re kind of forced to take care of your own.”

In her book, “To Serve the Living: Funeral Directors and the African American Way of Death,” author Suzanne E. Smith wrote that the industry was one of the few that gave Black people a chance to be economically independent.

Consequently, she wrote, these Black families were not beholden to the white establishment and had the financial freedom and social clout to serve their communities in a greater capacity. They often ran for office, fought for civil rights, and ran charities.

The same was true of Latimer Sr. and Lydia, according to their obituaries. He held prominent positions in two fraternal organizations and was the trustee and treasurer of Mt. Olivet Baptist Church, while she chaired the local NAACP’s membership committee and belonged to several service organizations. They died in 1980 and 1996, respectively.

Millard E. Latimer Jr. grew up in the house on Clarissa Street. His father had designs on him becoming a dentist, but “Sonny,” as his father and everyone knew him, had other plans.

“I couldn’t see myself doing another six or seven years in college to be a dentist,” he once told the Democrat and Chronicle.

After a year at Howard University, he transferred to the Worsham College of Mortuary in Chicago and then enlisted in the Air Force. He flew combat missions over Korea with a bomber crew and, upon returning home in 1954, joined the family business.

Father and son moved their funeral home to South Plymouth Street six years later and in 1963 incorporated the business under its current name, with Latimer Jr. as president.

Under his stewardship, the funeral home expanded to include private viewing rooms, a chapel, and casket sales. When families were without birth records, a not uncommon problem for older generations of Black people, Latimer Jr. tracked down the paperwork.

George Fontenette, 75, said the Latimers have buried 26 of his relatives, beginning with his great-grandmother in 1958. He called the family and business “a pillar of the community.”

“I look at the old-time Rochesterians and there is a family tradition to go back to Latimer because of the sincere care they have given to people,” he said. “I’ve heard people say they worked with people who couldn’t afford a funeral at the time. That means a whole lot.”

Latimer Jr. married Monique in 1973. She was a beauty queen, literally, who was born Maggie Lue Devlin in South Carolina and raised in Philadelphia. A mutual friend had set them up on a blind date after Latimer Jr. was widowed and Monique had divorced.

The couple each had two children from their other marriages and together had one more. They raised their family in Pittsford. Latimer joked that they were “The Brady Bunch in color.” 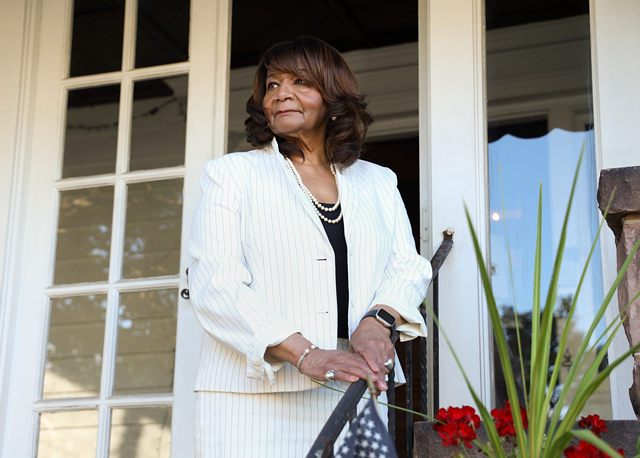 “I had never seen a dead body except maybe in pictures or movies, but not close contact like in an embalming room,” Latimer recalled of her marriage in the early years. “It was a totally new experience for me. I used to talk to my husband with my back to the door.”

Like her mother-in-law, however, she became integral to the business. She started doing secretarial work and odd jobs before eventually getting her embalming license.

“I had to help with, you know, paperwork, clerical-type things,” she said. “I ordered flowers, took payments, I drove the hearse, I was pregnant hitting the steering wheel with my belly.”

Once one of just two Black-owned funeral homes in the Rochester area, Latimer & Son now competes with seven. Many of their proprietors trained with a Latimer.

But nationwide, the Black family-owned funeral homes that prospered through segregation are now struggling to survive amid changing market forces. Many cannot afford to keep their doors open and chains have swallowed them up.

The National Funeral Directors & Morticians Association, the largest Black trade group in the industry, does not track the number of Black-owned funeral homes in the United States. But its membership of 1,200 businesses has fallen markedly compared with the reported 2,000 members it had in 1997.

What becomes of Latimer & Son has been a family question for the better part of 20 years. Despite knowing perhaps better than most that life is finite, Latimer answers the question facetiously.

Latimer, 80, has been unable to persuade any of her five children or grandchildren to take over the business. She joked that she and her late husband even tried bribing them with the promise of an SUV.

Her youngest daughter, Millena Latimer, 48, and a grandson, Jarred Jones, 35, play supporting roles in the business, much the way their mother and grandmother did a half-century ago.

Millena lives upstairs at the funeral home and organized the business’ centennial celebration, which was as much about the community as the company. The funeral home offered health screenings, hosted live music, and held a raffle.

When he isn’t helping around the funeral home, Jones serves as the deputy state director for Sen. Kirsten Gillibrand.

“All three of us have had discussions about what’s going to happen in the future,” Millena said of her mother and nephew.

She and Jones chatted from a corridor in the funeral home whose wood-paneled walls were adorned with photographs, diplomas, and accolades of their ancestors.
Around the corner, huge portraits of “Pop” and Lydia Latimer hung over a mantle festooned with thank you cards from grateful clients.

“We will do everything in our power to ensure that Latimer Funeral Home exists for another 100 years because it’s something that shouldn’t see the end of time,” Jones said.

David Andreatta is CITY's editor. He can be reached at dandreatta@wxxi.org.