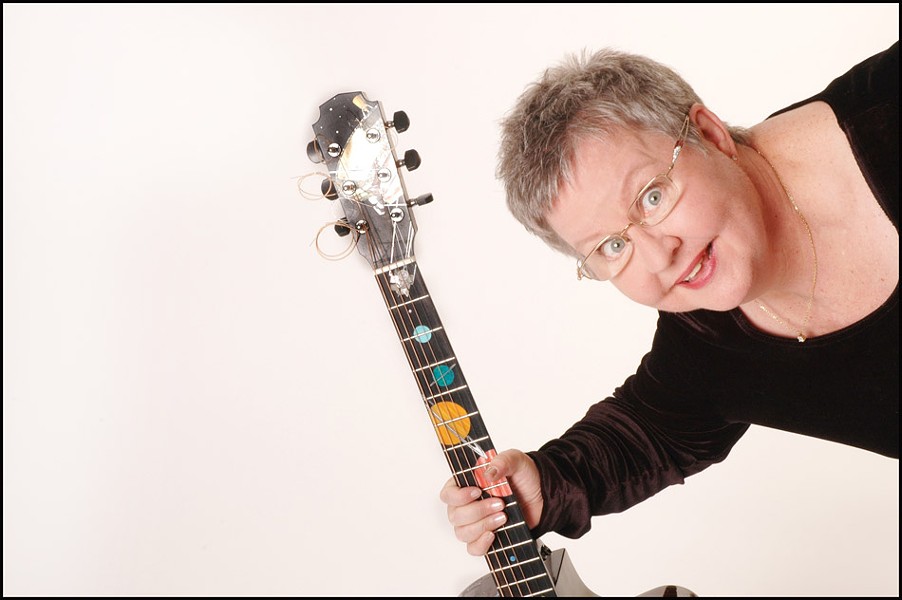 PHOTO PROVIDED Singer-songwriter and author Christine Lavin is about to release her 23rd studio album, "Spaghettification," on August 29.

Christine Lavin is a wonder. The 65-year-old singer-songwriter's performances are fresh and interactive, and whether she's playing the coffee house circuit, a festival, or rocking out on the front porch of her sister's house in the Highland Park neighborhood, Lavin sandwiches her shows in between rounds of knitting and fancy napkin folding with her fans.

Lavin's concerts involve plenty of humor and storytelling, a lot of times about her encounters with celebrities — the SUNY Brockport graduate has crossed paths with a bunch of famous people, which she chronicles in her 2010 book, "Cold Pizza for Breakfast: A Mem-wha?" — and she often includes surprising feats, like launching into a rap or twirling a baton.

"Spaghettification," Lavin's 23rd studio album will be released on August 29. The 15-track album contains funny tunes ("College Fight Song For Sesquipedalians"), serious songs ("Turn This Ship Around"), and mixed bags ("It's Your Funeral. Discuss"). All of the songs display Lavin's ability to use clever lyrics and monologues to clearly articulate what's exactly on her mind. Plus, Lavin's charming voice frames it all perfectly.

CITY Newspaper shot out questions via email to Christine Lavin, who shot back answers while on tour in Canada. An edited transcript follows.

How has growing up in a large family prepared you for life in show business?

It didn’t prepare me at all. I was going to be a nurse, like my older sister. When you’re from a big family I think your parents are so obsessed with making ends meet that they just pray you do something useful that pays the bills.

Can you elaborate about your encounter with Bob Dylan?

I was part of the entourage that traveled with The Rolling Thunder Revue the first week of the tour in November 1975, simply because Lena Spencer, owner of the Caffe Lena in Saratoga Springs, was invited to tag along and she didn’t have a driver’s license or a car. I had a driver’s license; another girl living at Lena’s had a car, so we got swept along. Dylan was a nervous presence, always jumpy, and all the other performers were very aware that his presence made the tour possible. They were grateful he was generous and opened it up to many musicians.

What was your wildest gig ever?

Someone thought I'd be well received at CBGB back in the 1980's. I don't know what they were smoking. So I showed up, and I asked the stage manager if it's safe to leave my purse in the dressing room. After he stopped laughing his head off, he told me the only safe place for my purse was onstage right next to me, with my foot securely planted on its strap.  So that's how I performed, and crazy punk heads danced all around to my songs, banging into each other on the "dance floor." There was some kind of punk band following me, so I grabbed my guitar, my purse, zoomed out of there, and never looked back.

Funny enough, a few years later I met Joey Ramone at Vin Scelsa's radio show. Vin introduced us on the air and Joey told me he wanted to write songs with me. I didn't believe him — and I couldn't imagine writing with him, so I chalked it up to one of those show-biz conversations where people say things that sound good, but they're not really serious about. But I did give Joey my number, though he never called. And now he's gone. Maybe I should have called him?

Why did you decide to incorporate your other skills into your performances?

I believe any skill you have — within reason — can be part of your show if it is entertaining.  I don't knit or fold fancy napkins onstage, but I do backstage, and it occurred to me that if audience members knew that's what was going on, they might want to be part of it. This weekend I'm performing at the Kingsville Folk Festival in Canada, and they've actually scheduled a napkin-folding workshop on Saturday afternoon. I always travel with a dozen cloth napkins in my suitcase, so even though I didn't know this activity was officially scheduled, I'm prepared.

Can you describe your song-writing process?

I write from inspiration; hardly ever write on command. I never know where song ideas will come from, but once an idea takes root, it won't leave me alone until I write it. It's like an annoying friend, constantly tugging on my sleeve saying, "Write me! Write me!" And when I focus on it, the process envelopes me, I lose all track of time, can stay up all night, fall into bed at 8 a.m., then wake up three hours later with that song idea doing its sleeve-tugging, "Finish me! Finish me!" Nobody chooses songwriting — songwriting chooses you.  It can be a lonely, frustrating life sometimes.

Is there a theme behind your new album "Spaghettification"?

I can't say there's a specific theme, but these are songs that I am writing now, having started writing songs more than 50 years ago. One good thing about being a mature songwriter is that you have much more material to draw from. One of the songs, "What the Hell Was That?," was a disastrous dinner I had many years ago at a Manhattan restaurant.

My long-time love was an attorney, and he hinted he was bringing someone to dinner, but wouldn't tell me who because I think he thought I wouldn't show up. It's not an exaggeration to say that the man he brought was eventually one of the most reviled Americans of the 20th Century. He turned out to have revolting table manners, too. And since his name has kept coming up in politics recently, I thought I should write about that dinner, to remind Americans who this man was and how his influence continues to affect us today. There will be those who won't recognize the name, so maybe they will check out Wikipedia.

How did you hook up with Neil deGrasse Tyson?

He called me up at 2 p.m. on a Monday afternoon and asked if I would come and sing "Planet X" at his "Astronomers & Comedians" concert at the Beacon Theater that night at 8 p.m. I had six hours' notice. Luckily it was the year of the Pluto flyby, so I had been singing "Planet X" fairly often; I was ready. But it was still nerve-racking because I got one "D" in college at SUNY Brockport in Astronomy. I knew I'd be in the presence of 1,500 Astronomy A+ students, so I was sweating bullets. But I made it through, and Neil not only gave me a copy of the recording, he okayed it being included on the album. I hope this makes up for my "D."

At what point did you finally feel like you made it as a musician?

I think the applause at the end of "Planet X" that night. It was the biggest applause I ever experienced, and it was recorded. No matter how low I might get — I can remind myself that for one shining moment I was in the presence of one (if not the) most important science voice in our country, Neil deGrasse Tyson, and he and his followers dug my song about Pluto. One time after a concert in Chicago, a woman told me her 7-year old son had memorized "Planet X" and recited it three times in a row that morning at breakfast. Maybe that kid will grow up and become a scientist and figure out how to reverse global warming.

What's something you know now that you wish you knew when you were starting out?

I know now that songwriters are much better off not getting romantically involved with other songwriters. The chances of it working out in the long run are so slim, while the chances of it ruining a potentially long-lasting friendship are so great — that it’s best to tread lightly if you even think of going down that road. There’s a reason that opposites attract, and “likes” repel. Two songwriters pairing off can be as disastrous as an office romance gone wrong. Dave Van Ronk tried to drum that into my brain. “Stay out of each other’s beds!” he warned. “It won’t work and you’ll lose one of the best friends you might ever have had in your life.” Think of this as sage advice coming from Dave, through me, to you.

Where is the most interesting place a Christine Lavin song has been played?

The oddest place was a high-end stereo store on the Upper East Side of Manhattan. I remember the brand name, Bang & Olufsen — ridiculously priced stereo equipment. When I asked the salesman why he was playing the album he was (I didn't tell him it was mine) he said he chose it ("Attainable Love," recorded in 1990) because it was perfectly mixed and mastered, and it was the best way to show off the speakers that he sold. The producer who engineered that album was David Seitz, a physician whose hobby was producing and engineering music albums. Before we left the store I did tell the salesman it was my record playing. He was as surprised as I was walking in. I felt weird to hear my music coming out of speakers I could never, ever afford to buy in homes I would never, ever set foot in.