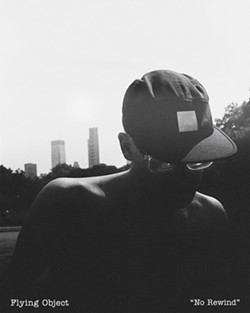 Rochester musician Matt O’Brian — best known as a founding member of Giant Panda Guerilla Dub Squad and later the frontman and drummer of Thunder Body — is back with a new project.

In March 2020, O’Brian put a band called Flying Object together for several gigs at Abilene Bar & Lounge. That series of shows was cut short as the pandemic took hold, but O’Brian has hit the “restart” button with “No Rewind,” his debut EP under the Flying Object moniker.

The five original songs on “No Rewind” depart from much of the overt roots-reggae influence and party vibes in Thunder Body’s music in favor of stream-of-consciousness introspection set to free-flowing pop structures. But O’Brian’s musical charm and soul-infused baritone vocals are still intact.

O’Brian plays nearly all of the instruments on “No Rewind,” with the exception of Sam Snyder’s contribution as bass player on three of the tracks. Snyder also engineered, mixed, and mastered the EP — creating a consistency of sound that makes for a cohesive set, rather than just a handful of well-crafted, lo-fi demos.

Songs such as “Heads or Tails” — a self-aware look at the often-adverse relationship between originality and commercial success — can be jaunty. But they can also be mercurial, as with the key changes in “Internet Wind,” which warns against social media.

Throughout the EP, O’Brian delves into the autobiographical, coming across as older, wiser, and a little less carefree. While most of the songs carry an upbeat optimism, sadness takes over the closing track, “Tiny Bits of Paper.” There, O’Brian wistfully reflects on a breakup as fuzzy tropical vibes in the guitar and bass suggest a past paradise:

This will probably be the last song on the first record but we’ll see how it goes/ We forgot to follow the signals and we wound up toe to toe, going blow for blow/ I figured this song would become some kind of melancholy ending/ Though I hoped that we were mistaken when we thought it was breaking, that it was only bending.