PHOTO PROVIDED Installation view of "Stunning (Blue is for our Baptism)" by Marval A. Rex, part of "Peripheral Of: The Periphery," currently on view at Flower City Arts Center.

"Peripheral Of: The Periphery"

Works by Ryana Lawson and Marval A. Rex

"Peripheral Of: The Periphery" is one of four current exhibitions that showcase the culminating works by the most recent rounds of artists in residence at Flower City Arts Center. On view at the center's Firehouse Gallery are works by the 2016 ceramics residents, Ryana Lawson, who is from Rochester, and Marval A. Rex, who is moving to L.A. and will enter a fine arts graduate program at the University of Southern California in the fall of 2018.

Provided information states that the two bodies of work "coexist existentially to interrogate the presupposed Normal. The objects shown here flirt with the peripheries of Reality, and challenge the weak threads that claim a static or solid existence. The artists ask: 'How does a thing become a thing — and, how does a thing become no thing?'"

Rex is a trans man whose cross-disciplinary artistic practice is dedicated to exploring and busting through the boundaries of social constructions. Here Rex has incorporated ceramics and mixed media sculpture, installations, video work, and temporal performance pieces. In fact, some of his work in the current exhibit are the remnants of time-sensitive sculptural performance pieces which took place during the opening reception earlier this month.

"Solid" is an ongoing series of ephemeral works, each composed of a large glass cylinder that held a roughly phallic, unfired clay form. Each form was painted white — this absence of color is repeated throughout Rex's work, alluding to both Jacques Derrida's ideas of hauntology as well as the specter of white supremacy as a dominant factor in our world — and during the opening, water was poured from pitchers into the cylinders.

As the water and time wore into the work, the paint "skin" deteriorated, the clay became mud, and objects formerly buried within the clay were revealed. One of these is a porcelain statuette of the Virgin Mary, spinning off a web of associations about purity and power and resilience, and how vessels are important but sidelined compared to what they bear.

One of Rex's two massive installations is "Stunning (Blue is for our Baptism)," an environment that centers on a kiddie pool framed by potted paradise palms and filled with the mud-water remains of two phallic clay forms. This work was inspired by a talk radio program in which two white men discussed pool safety — specifically to assuage the problem of children drowning in backyard pools — in an increasingly fever-pitch tone.

An audio element includes a mix of jarring noise and haunting music with bits of the men going on and on at rapid clip about safe swimming techniques, apparently developed and being sold by one of the speakers.

"It's stunning when you see it happen," one of the voices enthuses about witnessing a child tossed in the water and not drown. "All my children have been through your program." At this point, it becomes evident that the extended conversation is an ad, selling a product with fear.

Rex says he was fascinated that these men had such a platform for a relatively small danger — to a privileged portion of the population who have home pools — when so little airtime is devoted to tackling more widespread issues, like children dying of hunger.

There's a lot to unpack in Rex's art. Each piece is crammed with intentionally slippery associations that reflect his enthusiastic search for non-binary ways to understand our world and experiences. And reading his artist statement won't help most — it's a volcanic display of well-reasoned academic jargon that takes a second to digest. But in conversation he's more plain about his ideas as well as disarmingly, engagingly exuberant. For those who want to learn more, check back with this article for an edited transcript of our extremely nerdy conversation.

Ryana Lawson's approach to creating is much more direct; she makes traditionally accessible but nonetheless engaging vessels and clay-based sculptural installations that are adorned by colorfully glazed drawings of plants and animals. Imagery of a sometimes savage garden and titles that allude to mysticism, death, and The Fates reflect philosophic ideas about power dynamics and agency. A swarm of fiber moths pinned to the wall interact with a row of ceramic candelabras that reference the Tree of Life arranged on a wide pedestal below.

But the two artists' work plays well together in subtle thematic ways. Lawson also created two urns that reference the formal elements in Rex's work, and are displayed on a pedestal, framing one of Rex's temporal cylinders. Displayed on shelves of one wall are cash-and-carry ceramic cups and mugs collectively titled "research" and created by one or both of the artists, each piece reflecting their individual aesthetics.

Slideshow "Peripheral of: the Periphery" 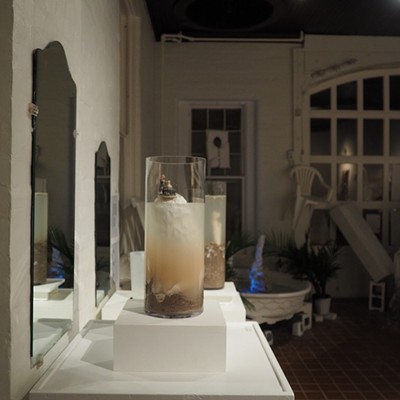 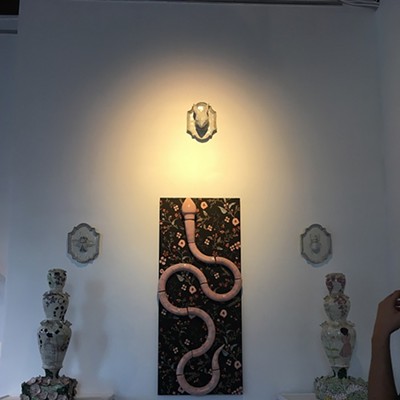 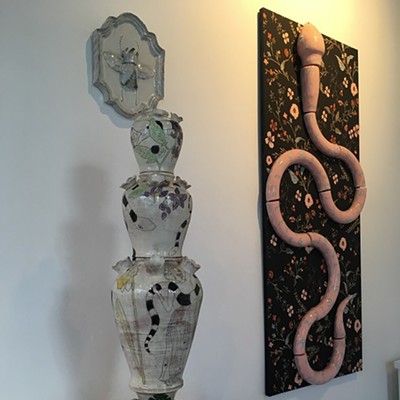 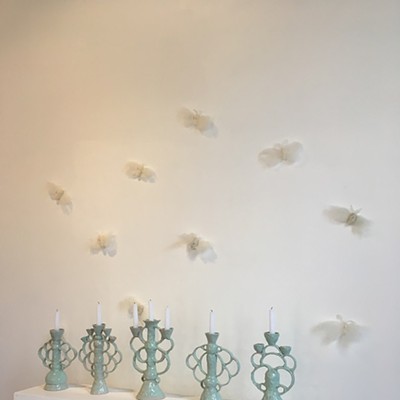 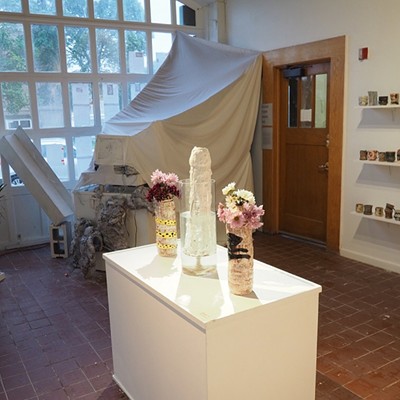 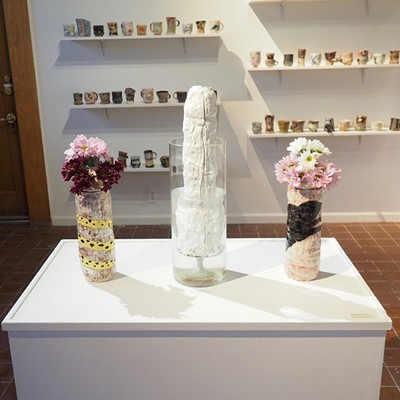