The Celtic punk band was at a venue near San Diego last year when concerns about coronavirus caused the plug to be pulled on its show.

“We all had to go home, send all of our gear back,” recalls guitarist and Rochester native Dennis Casey. “I think we all thought it would be over in a few weeks and we would be back at it. Nobody knew.”

Like every band during the shutdown, Flogging Molly was on a pause. For an act known as a touring mainstay, the resulting time off from touring was unprecedented. The band’s last concert in front of a crowd was in 2019. The timing robbed fans of Flogging Molly’s annual St. Patrick’s Day Festival in Los Angeles. Its Salty Dog Ocean Cruise was grounded.

Reuniting this year in March, the band joined frontman Dave King and fiddle player Bridget Regan in Dublin for a livestream on St. Patrick’s Day. “It was like seeing family,” Casey says. “I remember thinking after the first song, this is what we do. This music is the thread that holds us together through everything.”


Flogging Molly headlines the concert with iconic folk-punk trio Violent Femmes, who ruled college airwaves of the 1980s with such songs as “Blister in the Sun.”

“On every tour, you have a pool of bands you can choose from. We’re all Violent Femmes fans,” Casey says. “It’s a band that when I was working at the House of Guitars, I would never think we would tour with them.” 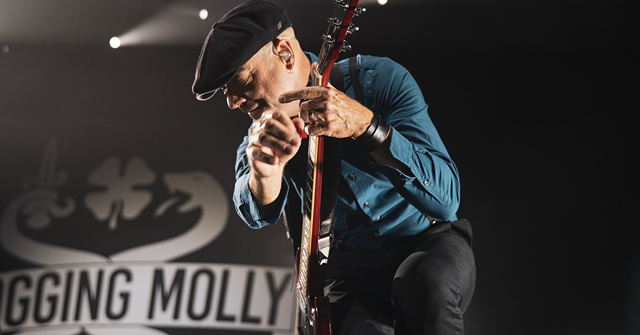 Adding the nostalgia of Violent Femmes to the bill makes the pairing a good one. The Milwaukee-based act is marking the 30th anniversary of its fifth studio album, “Why Do Birds Sing?”

Since emerging more than 20 years ago, Flogging Molly has become an Irish-American cultural institution. Pouring its collective heart out at shows, the band embraces a spirit rarely found on this side of the Emerald Isle.

The band broke out with its debut album, "Alive Behind the Green Door," which captured a night at Molly Malone's Irish Pub, and has followed it up with a string of increasingly successful studio records, including "Float," which peaked at No. 4 on the Billboard chart.

Flogging Molly’s new record, its as-yet-untitled seventh studio album, will be recorded in the fall. The band spent several weeks this summer writing songs for a new record at King and Regan’s basement in Detroit. Since the group had never had so much time off prior to writing an album, the sessions proved to be quite prolific. “Everybody, particularly Dave, had a lot of ideas, a lot of songs,” Casey says. “There was a great energy in the room. We just hit it and hit it hard.”

Barring any unforeseen setbacks, Flogging Molly’s co-headlining tour that stretches through October will go off without a hitch. The band is going on a European tour next year and playing catch-up with a host of rescheduled dates.

For Casey, who has relocated to the Rochester area, there’s no place like home. “I didn’t know what to expect when we first played here,” he says. “We kept coming back and it grew and grew. I’ve never won a lottery or jackpot, but I imagine playing Rochester feels like that.”

Roman Divezur is a freelance writer for CITY. Feedback on this article can be directed to rrafferty@rochester-citynews.com.