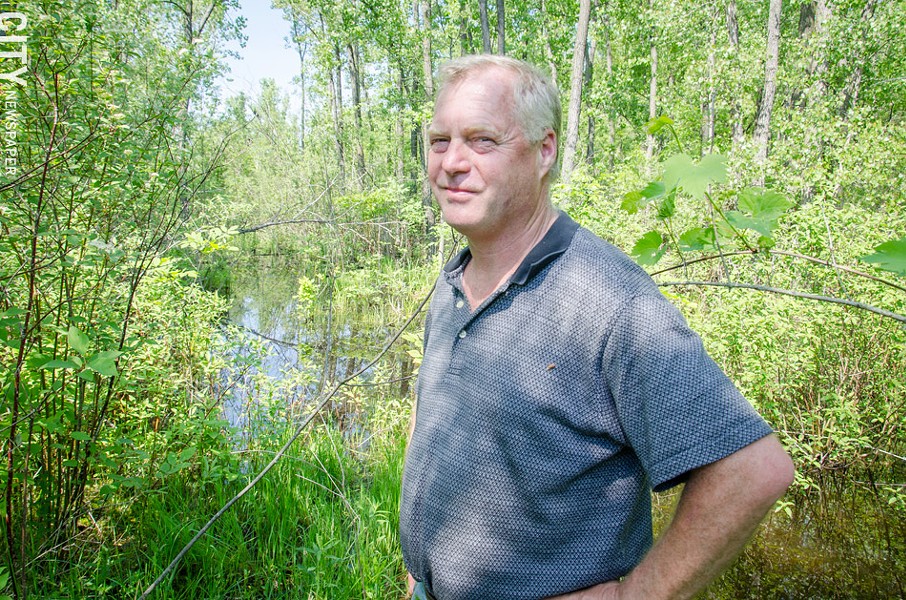 PHOTO BY MARK CHAMBERLIN John Bolton looks out on marshlands on his Parma property. Bolton's property is one of 60 sites included in a migratory bird study.

Local birders have long known about the birding hotspots near Lake Ontario — wisdom gained through long hours on the lens and guided by intuition. Now those assumptions are backed by hard science.

A recent study conducted by the Nature Conservancy of Central and Western New York, Audubon New York, and the New York Natural Heritage Program has found that green space near the lake is heavily used by migrating birds.

But that's not all. Researchers for the Lake Ontario Migratory Bird Stopover Project also conducted bird counts farther inland, learning that migrating birds like the magnolia warbler and ruby-crowned kinglet also make stops at urban and suburban islands of green space. Those include parks, preserves, and private woodlots.

"They are using the entire landscape," says David Klein, senior field representative for the Nature Conservancy of Central and Western New York.

The Rochester area is important to migrating birds because of its proximity to Lake Ontario, which is basically a big obstacle to birds in flight. In the spring, many northbound species stop in the area to rest and to wait for good weather before making a nighttime flight across the lake. In the fall, the Rochester area is the birds' first stop after they cross the lake while heading south for the winter.

The blackpoll warbler is one of those birds and makes an impressively long journey. It starts its spring voyage in South America, originating as far south as the Peru-Bolivia border area. It stops over near Lake Ontario's southern shore on its way to the boreal forests of Canada and Alaska, where it breeds. (This year's northbound spring migrants, including the black-throated blue warbler and the Swainson's thrush, have mostly passed through the area by now, but will come back through in the fall.)

"What's key for them is that when they're tired or when their energy reserves are depleted, or bad weather comes in and forces them down, they need to find a hospitable place to land," says Mike Burger, Audubon New York's director of conservation and science.

That's where the forest patches dotting the Rochester and Finger Lakes region's landscape come into play. Some of the tree and shrub habitat that supports the migrating land birds has been lost over the years — chewed up or fragmented by sprawling development.

"The remaining patches of forests and shrublands in this area have become increasingly important to migrating birds, which rely on them for food and shelter," says the report from the Lake Ontario Migratory Bird Stopover Project.

The report is based on data collected over a three-year period by 55 volunteer, expert birders. They made multiple visits to 60 publicly- and privately-owned sites, which were randomly selected from properties known to have significant tree and shrub cover. Birders methodically conducted counts within clearly defined segments on each site.

The report's conclusions echo what many people already know: that preserving green space can have important benefits for wildlife. But the report also pinpoints actual migratory bird hotspots, and researchers were able to use that data, including landscape characteristics, to predict other sites that might attract migrating land birds.

The report's authors say they hope by showing the location of actual and likely hotspots, they can encourage public and private acquisition and protection of some of the properties. They say they also hope the study encourages landowners — public and private — to manage their properties in ways that attract and support the birds.

John Bolton tries to make his 70 acres of land in Parma hospitable to wildlife. Bolton Farms grows greens for area restaurants and markets, but the land also includes ponds, pine groves, and marshes, which attract deer and wild turkey. Bolton's noticed blackbirds and flickers hanging around, too.

"It's a very unique location with a lot of habitat," he says.

When organizers of the stopover study approached him about using his property, Bolton says he readily agreed. As a result, he learned his land supports more birds than he realized. After the counts were finished, study organizers provided Bolton with a report detailing the birds they saw or heard on his property. There were over 100 species on the list, Bolton says. Bluebirds and several types of hawks stuck out.

"I would say that probably a third of the list of what they gave me, I didn't realize were on the property or flying by," Bolton says.

Bolton purchased the property in 1983 and has used a maintenance plan developed by the Monroe County Soil and Water Conservation District to make the land friendly to wildlife. It involves tasks like cutting vines out of trees so the trees let in more light, which creates better nesting areas for ducks and geese.

Bolton says he appreciates the wildlife that's around his property and intends to keep the land as farmland and habitat.

The groups involved in the study say they want to encourage other private landowners — individuals and corporations — to follow Bolton's example. Every private landowner can play a role in developing a welcoming habitat for migrating birds, says the Nature Conservancy's Klein.

The birds often prefer larger woodlots, and owners of those properties can use several management approaches to make them welcoming to the birds. For example, they can selectively harvest timber, while retaining trees and shrubs of different sizes and heights and keeping tree buffers along streams. The study also suggests allowing woodlots to have gradual, meandering edges instead of abrupt transitions.

But it's not just multi-acre woodlots that support migrating birds; backyard bird habitat is important, too.

"All of us can play a role here in our lawns," Klein says.

The simplest way to improve backyard bird habitat is through native plantings, especially shrubs like honeysuckle and serviceberry, Klein says. But there are myriad other things people can do in their yards. The Audubon Society has a page devoted to developing backyard and neighborhood bird habitat: http://athome.audubon.org/.

Federal, state, and local governments often own large tracts of land used by migratory birds. Frequently they are parks, which already serve, at least to some extent, as wildlife habitat.

New York City's Central Park may sound like an unlikely draw for migrating birds, yet it's a well-known bird-watching site. The city is on a migratory pathway and the park is a green oasis in a large area of concrete, glass, and asphalt. If a bird is passing through and the sun is coming up or the weather is turning, it's going to take refuge there.

Washington Grove in Rochester's Cobbs Hill Park is a migratory bird hotspot for similar reasons. Like Central Park, it's an urban green space in a migratory pathway. These spots may not provide ideal habitat — though volunteers and the city have been working to rid Washington Grove of some invasive trees so that the natives can thrive — but it works.

"If you're really hungry and looking for a good meal, it's not your first choice necessarily," Burger says. "But if you've got to drive 20 more miles to get to a decent restaurant, you'll probably stop."

Other larger local parks also get a lot of use by migrating birds. And several of them are close to the lake, which adds to their importance. Researchers found that migrating birds concentrate in the county's Webster Park, as well as an area in Seneca Park near the Genesee River. Hamlin Beach State Park is another significant migratory bird stopover site, Klein says.

The groups involved in the study say they hope their findings encourage protection of more sites. But like private property, the way these sites are managed is also important. And they generally encourage public landowners to take the same steps as private landowners, which means managing the land in a way that provides attractive habitat and food for the migrating birds.