By David Andreatta and Rebecca Rafferty 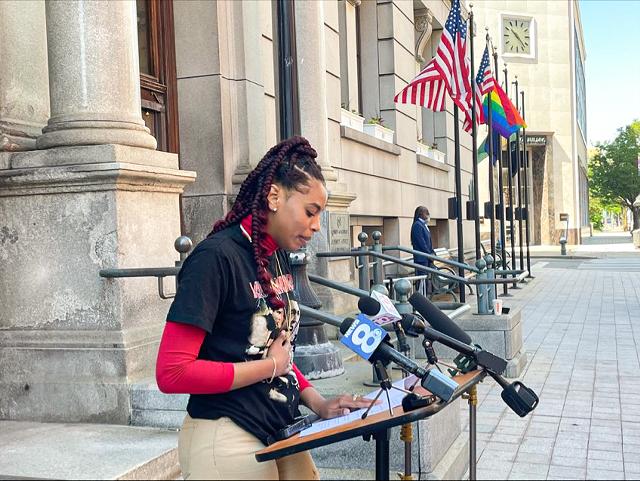 The woman whose accusation of sexual harassment against Monroe County Legislator Ernest Flagler-Mitchell led to a finding that he violated the county’s ethics code reiterated her call Friday for him to resign.

The 20-year-old woman, LaKaya Sinclair, recounted the harassment she says she received from the legislator after he offered his support following deadly shootings at her home on Pennsylvania Avenue during a house party in September.

Her comments followed a finding Thursday by the county Board of Ethics that Flagler-Mitchell violated the ethics code when he sent a lewd photo to Sinclair in a Facebook message, and that the incident was “consistent with a pattern of similar behavior.”

Flagler-Mitchell, who was first elected to office in 2014 and is facing a Democratic primary challenge this month from social worker William Burgess, has acknowledged sending the photo but has said that it was intended for his wife.

In its report on the matter, the Ethics Board wrote that Flagler-Mitchell’s explanation “lacks credibility,” and pointed to findings by the District Attorney’s Office that 11 other women have complained of receiving inappropriate or explicit messages and photos from the legislator.

District Attorney Sandra Doorley last month determined that Flagler-Mitchell’s behavior in the case of Sinclair was not criminal, but turned her files over to the Board of Ethics for review.

What penalties, if any, Flagler-Mitchell might face is unclear. The ethics code spells out that a legislator found to have violated the code could be fined, suspended, or removed from office, but is not specific on how any of those punishments might be enforced.

“I called for Ernest Flagler-Mitchell’s resignation at the start, and I call for it today,” Sinclair said.

Flagler-Mitchell has not returned messages left for him since the Ethics Board ruling was made public. His supporters have called the finding of the board politically-motivated.