For the 'Year of Glass,' chamber musicians and glassblowers collaborate in 'More Fire' 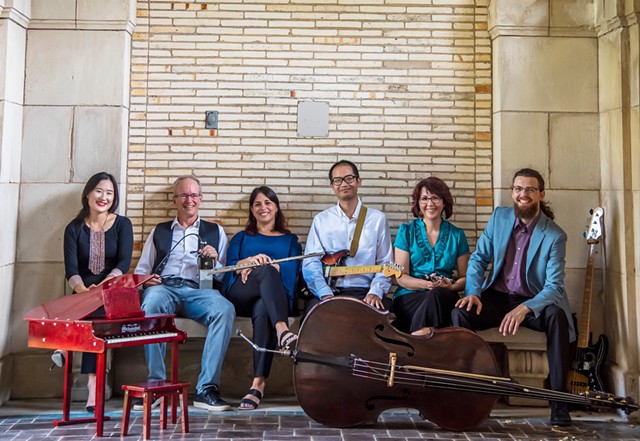 Glass can be easily broken. But in the right hands, and with the right tools, it can also be easily changed. Far from a finite substance, glass is as flexible as it is fragile, and glass blowers like those at the Rochester-based art company More Fire Glass Studio excel at demonstrating these traits in their glass sculptures.

Adding music to the mix, local ensemble fivebyfive joins the glass studio on Sept. 18 at the Rochester Fringe Festival, as part of the United Nations International Year of Glass.

Laura Lentz, fivebyfive’s artistic director and flutist, said audience members can look forward to a concert unlike anything they’ve ever experienced. “You’re watching glass art happen in real-time with music that grows in intensity with that process,” she said. “We’re looking to create an experience that builds a bridge between those two art forms.”

Fivebyfive came together in 2015 when its members saw a need to make chamber music more accessible, push boundaries in contemporary music, and establish interdisciplinary connections between artists and audiences.

As an eclectic ensemble of flute, clarinet, electric guitar, bass, piano, and electronics, fivebyfive sought creative collaborators to bring out the ethereal intensity of music and glass art. For example, fivebyfive members Lentz, Marcy Bacon, Ken Luk, Eric J. Polenik, Haeyeun Jeun and Marc Webster open the concert with Brittany J. Green’s “Lead Me Home.” The North Carolina-based composer has described the piece as having a “shimmering texture that gradually unfolds” — much like the rising intensity of the glass-blowing process.

Rather than performing with fivebyfive inside the Theater at Innovation Square, More Fire Glass Studio will appear via Zoom. “It’s live from [the studio], to be projected on screen because there’s no way we can move our equipment into that space,” said More Fire founder Elizabeth Lyons. Glass-blowing requires large furnaces, several molding tools, pipes, and other equipment to create the artwork safely and precisely.

Lyons explained that glass-blowing is like a dance she and colleagues Jennifer Schinzing and Michael Krupiarz have done a million times since the beginning of More Fire Glass Studio in 1998.

“We’ll have an idea in mind,” Lyons said. “We might make a sketch on the floor, and then we’ll go after what we want to make, and we don’t have a ton of time.” In less than an hour, the More Fire glass artists will work according to the music they hear.

The Fringe Festival audience will be the first in the world to hear Kari Telstad Sundet’s “Dreams of Glass and Water.” Written specifically for fivebyfive, the composition has an ethereal, atmospheric feeling that triggers people’s memories and evokes a sense of time travel, said Sundet.

“Glass is kind of like water suspended in time because it isn’t liquid, and it isn’t solid either,” Sundet said. “It’s just moving too slowly for us to perceive it.”

Sundet drew inspiration from her Norwegian hometown’s natural beauty. “The silvery ocean and the frozen rivers look like broken mirrors,” she said, adding that it’s in these dream-like landscapes where water and glass meet.

Ken Luk, fivebyfive’s newest member and electric guitarist, is looking forward to making the audience part of the show.

“It’s more than music,” Luk says. “Now you can experience the visual part, and you, the audience, also feed some energy into the people making the glass.”

Audience members can stay after the show and join fivebyfive in the parking lot to smash homemade sugar-water glass.