Breathing in — and singing out 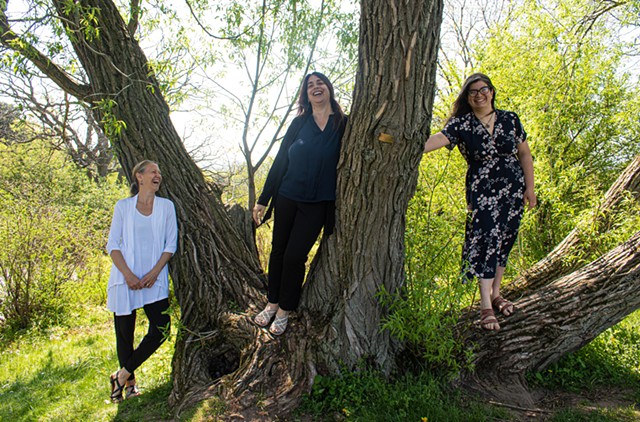 “Tuning Meditation” is not your typical musical piece. Created by the late experimental composer Pauline Oliveros in 1971, the composition has no set length, and the music isn’t written down. The audience members are the musicians. In other words, participants in “Tuning Meditation” are simultaneously both the listeners and the performers.

Bring these participants together online over Zoom to perform “Tuning Meditation” — from across Rochester and beyond — and you have the unlikely virtual concert presented on June 6 by local chamber music ensemble fivebyfive.

The piece, which will conclude the ensemble’s 2021 “Composer Chat” series, was initially conceived with instruments in mind, but has since been adapted for a cappella voices. In this version, no formal training is needed, and anyone can join.

“Tuning Meditation” is less a musical performance than a wash of sound, emitted by all involved.

This is how it works: Participants are urged to sing a pitch they hear in their mind. Then, they are to listen to those around them — what the composer refers to as “the whole field of sound” — and match another participant’s pitch, so that they’re singing in unison. Finally, they are told to listen again and sing a note that no one else is singing.

“It’s like a recipe. There’s no music, just instructions,” says fivebyfive flutist Laura Lentz, who will lead the free, open-to-all group exercise and anticipates the entire performance lasting about 10 minutes.

Fivebyfive first performed the composition at the 2015 Rochester Fringe Festival, soon after the contemporary classical quintet was formed. The group initially used the piece as a way to get better acquainted with one another as musicians, Lentz says. Eventually, “Tuning Meditation” also became about being more present and connected to the world.

“I think it's given me a deeper appreciation to really listen to people that I'm interacting with, and to listen to the sounds around me when I'm walking outside or whatever I'm doing,” says Lentz. “It is a meditation of sorts, obviously. But as a musician and as a human, it’s given me some tools to open my ears more, I think, and to engage with others a little bit more through sound and silence.”

Prior to the performance, Roc Yoga Revolution’s Lynne Boucher will lead the group in a breathing exercise. Although the link between yoga and music-making may seem tenuous, proper breathing is key to both.

No performance of “Tuning Meditation” is ever the same. The notes that are sung are impossible to predict. But the essence of the sound is consistent: ambient and ethereal and slightly dissonant at times. The voices come off as ghostly or angelic.

WXXI radio host Mona Seghatoleslami, a member of fivebyfive’s advisory board and a co-presenter of the June 6 event, says that “Tuning Meditation” online is “this thing that actually can give you chills, even though you're standing there alone in your room with your computer.”

As uncommon a work as “Tuning Meditation” is, there’s a precedent for performing it online during the pandemic. In April 2020, the Chicago-based International Contemporary Ensemble led about 600 people in “The World Wide Tuning Meditation.”

But a vital aspect of the series has been its use of technology to bring people together at a time when live concerts had until very recently been impossible to stage. Lentz figures previous “Composer Chat” events on Zoom drew between 30 and 40 people. 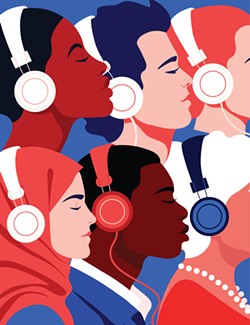 “One thing we wanted to do was to invite people to actually really be a part of music-making with us,” Lentz says. “And Pauline Oliveros’s piece ‘Tuning Meditation’ is probably her most inclusive composition.”

Performing “Tuning Meditation” over Zoom is not the same as in person. But Lentz says it allows for a shared experience with people outside of Rochester and around the world, and hopes the performance can be a poignant reminder of the need to connect with each other.

“Tuning Meditation” is scheduled for June 6 at 1:30 p.m. via Zoom. Anyone wanting to participate can register at fivebyfivemusic.com. The event will also be available via livestream on fivebyfive’s Facebook page and its website, and available for later viewing on the ensemble’s YouTube page.