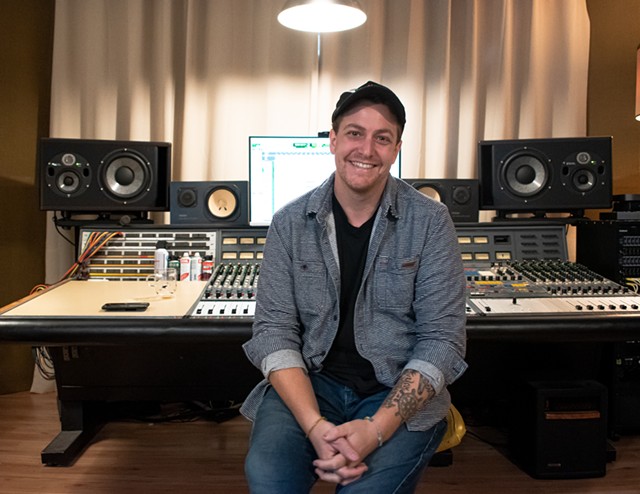 Dave Drago’s 1809 Studios in nearby Macedon in Wayne County has been a go-to destination for some of Rochester’s most prominent singer-songwriters looking to make full-band records. Danielle Ponder, Mikaela Davis, Jon Lewis, and Ben Morey have all turned to Drago for his abilities as a multi-instrumentalist, sound engineer, and producer.

A signature aspect of Drago’s work is also his favorite: the background vocal parts he frequently writes and records for his clients. “The backing vocal stuff has become a reason people come here,” he says.

Music produced at 1809 tends to feature classic song structures, rich textures, and big sounds. “Bring an idea to the table — don't be afraid of it, don't hide it behind other things,” Drago says. “Make it big, give it a personality, allow it to be something that people are going to hear.” 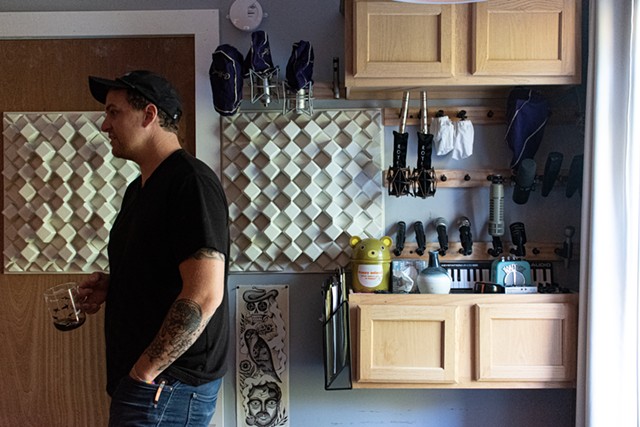 Drago says that serving the song is the top priority of all his recording projects. Most recently, he engineered, produced, mixed, and mastered “Waves,” the new full-length album by Rochester singer-songwriter Evan Meulemans. For one of the album’s songs, “Current,” serving the song meant creating a character for Meulemans to embody. In that case, a 19th-century evangelical preacher, reinforced by the prominent organ sounds and church-like reverb on the vocals.

“Be that character that you are trying to be in that song,” Drago explains. “And that character might be you, but who are you? And what is your purpose for saying the things that you're saying?” 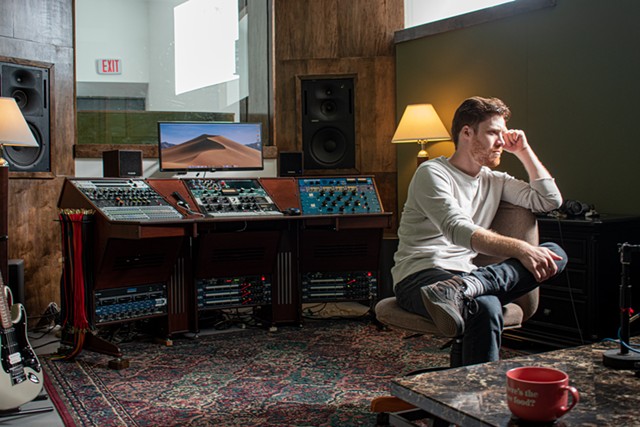 Wicked Squid Studios dates back to 2011, when owner Josh Pettinger began using an RV as a mobile studio to create multitrack recordings of live shows in basements, dive bars, and festivals. Wicked Squid was officially incorporated as an LLC in 2015, and has since become a popular studio stop for a wide variety of artists, from rock and funk bands such as KINDOFKIND and The Sideways to hip-hop emcees MF SKUM, Donny Murakami, and Negus Irap.

In addition to recording albums, Pettinger — along with fellow engineers and producers Christopher Dubuc-Penney and Ian Fait — offers video services to musical clients. Plans are in the works to convert Wicked Squid’s Studio B into a rehearsal space co-op for local bands.

The overall characteristics of the Wicked Squid sound are clear. Pettinger describes it as “punchy” and “controlled but also emotive.” 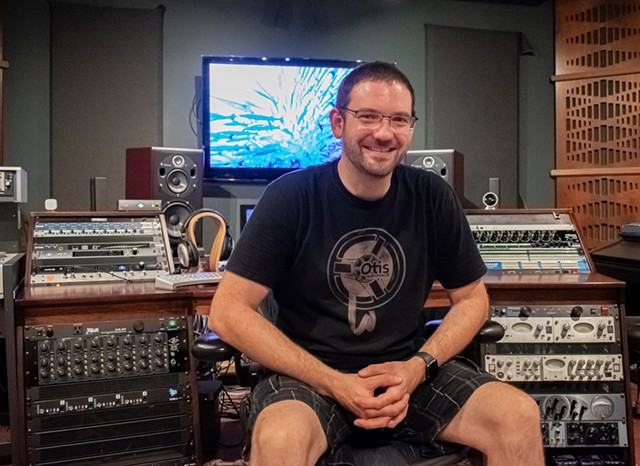 The tech junkie: Matt Ramerman of The Green Room

Prior to the pandemic, producer and engineer Matt Ramerman had already been the preferred choice for local artists such as bassist Luis Carrion, guitarist Bob Synder, the rock bands Maybird and MoChester, and the reggae outfit The Medicinals.

But once COVID trapped people in their homes and locked them out of live gigs, The Green Room began offering live-streaming services and video recordings.

A drummer by trade, Ramerman studied at Los Angeles College of Music with Ralph Humphrey — who played drums for Frank Zappa — before committing to sound production as a career.

“My role in the sound is to help the artist achieve the sound that they’re hearing in their head,” Ramerman says. 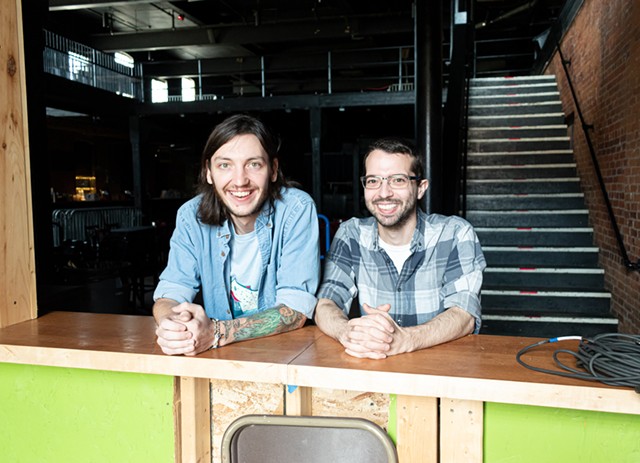 The recent history of Water Street Music Hall has been tumultuous, with multiple stops and starts involving liquor licences, changes in management, and short-lived restaurants. But the new managers in Rochester-area natives Andrew Nittoli and Riley Fressie — musicians who met while students at University of the Arts in Philadelphia — are looking to turn things around.

The duo now oversee the 1,000-capacity Water Street Music Hall, the more intimate Club at Water Street, and the newly established recording studio in the basement.

Nittoli says the name Studios at Water Street refers to its ability to utilize both the live rooms upstairs and the downstairs studios for recording.

Some of their recording projects include a funk album by Philadelphia rapper ENDO and producer Ty Key, as well as overdubs for the Buffalo band American Angelica Tree and Nittoli and Fressie’s Americana band Spooky and the Truth. 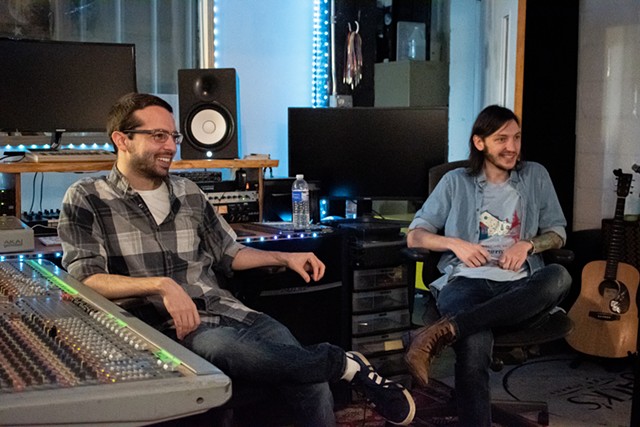 Vintage instruments and sounds are priority at the Studios at Water Street. Nittoli and Fressie say they avoid using digital plugins whenever possible, opting instead for old-school equipment such as a Rhodes electric piano once owned by Giant Panda Guerilla Dub Squad and a ’70s-era Fender Bassman cabinet.

And rather than using only digital software, all Water Street’s sessions are recorded to tape. “I’m looking for genuine,” Fressie says.

In the Rochester recording studio scene, Nittoli and Fressie are undoubtedly the new kids in town. After meeting in college and touring in Europe, they moved back to Rochester two years ago looking to make an impact with Water Street.

“We don't want Water Street to be just what everyone expects — ‘Oh, yeah, give it a couple months, then it'll tank again,’” Fressie says. “We're here for the longevity of it, and maybe it takes two kids who half-know what they're doing from Philly to come in and do it.”

University of Rochester professor and producer Stephen Roessner has quite the pedigree. At SUNY Fredonia, he learned from influential indie rock producer Dave Fridmann and was in the room for the sessions that yielded The Flaming Lips’ celebrated album “Yoshimi Battles the Pink Robots.” He worked as a recording engineer at The Juilliard School for nearly five years, and won a 2010 Grammy Award for his work on organist Paul Jacobs’s Naxos recording, “Livre du Saint Sacrament.”

Today, he guides aspiring sound engineers at U of R on recording projects. He’s also active as a producer and engineer, having recently worked on Calicoco’s album “Underneath,” as well as recordings for the Rochester band Bellwether Breaks.

“I focus on the energy that’s created, or the delivery — whether it be guitar or drums or vocals. It's about the emotion that's in the music,” Roessner says. “And as audio  engineers, now with digital editing, we can fix everything.” 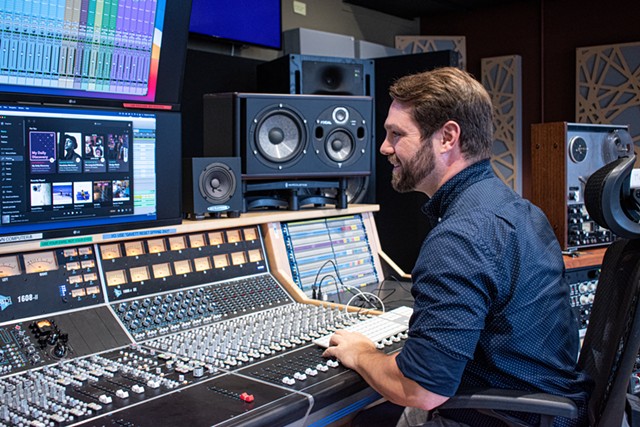 CORRECTION 11.3.21: This article has been updated to reflect that the Rhodes electric piano at the Studios at Water Street was once owned by Giant Panda Guerilla Dub Squad. The instrument was not purchased directly from the band.