With "Sight Reading," the current exhibit in George Eastman Museum's Project Gallery, curator in charge Lisa Hostetler reminds museum-goers of the importance of the institution's vast and educational photographic artifacts. There are few flashy, attention-snatching pieces in the show, so a studied patience is required, but viewers are rewarded for their discipline with a more complete understanding of how photography has aided and shaped the way we perceive our world.

The show exhibits examples of the ever-expanding variety of uses of the medium, from documentation, to capturing that which escapes our limited senses, to moving the public's ethos with the pathos of a picture.

William Henry Fox Talbot's 1843 print from a calotype negative, "Articles of China," demonstrates the ease of recording a collector's inventory, the photograph a more accurate testimony than written description. The image was originally published in "The Pencil of Nature" in 1845, which was the first photographically illustrated publication — its name is a poetic version of the phenomenon of writing with light. 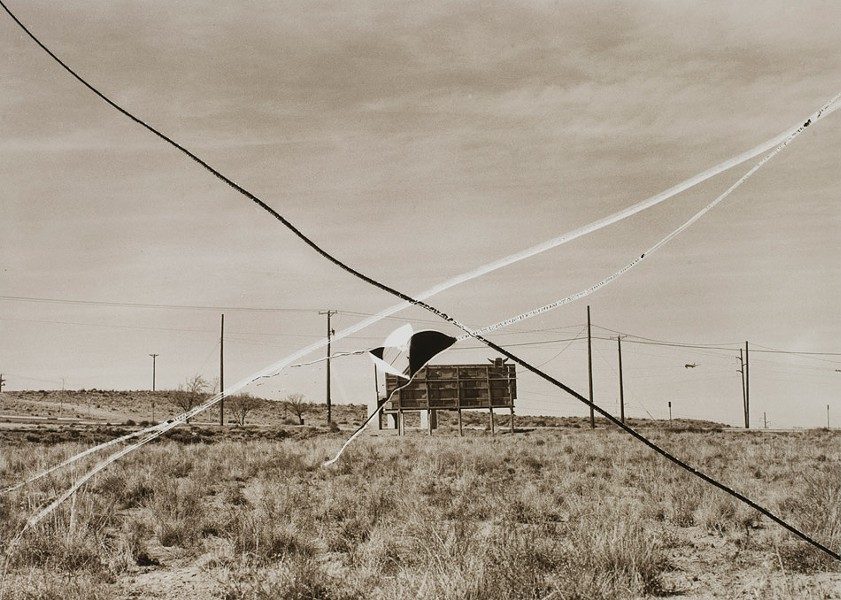 Similarly, Francis Frith's 1857 "The Temple of Kom-Umbco, New View," is another example of the medium used to record a wealth of information — here, the ancient and delicate hieroglyphic inscriptions on a sun-bathed wall. Previous methods of documenting the glyphs would have required making a potentially damaging rubbing of the delicate inscriptions, or making a potentially inaccurate drawing of the whole scene. By shooting the wall as it was raked by high sunlight, the contrast sharpens the glyphs, and the image gives the viewer a sense of environment as well.

A contemporary of Eadweard Muybridge, who is famous for settling debates about how physical bodies move through space, Etienne-Jules Marey's 1890 albumen silver print "Chronophotographic study of man pole vaulting" is a frame-by-frame study similar to Muybridge's iconic stills of a horse in full gallop.

Nearby, Muybridge's 1885 gelatin silver prints "Woman descending an incline with buckets of water" and "Woman pouring a bucket of water over another woman" read like classical sculptures coming to life while they dissect the specific shifts in musculature and the chaotic reaction of the water that results. These subtle prints contain scientific study, the wonder of poised elegance, and mesmerizing beauty all at once.

In 1936, electrical engineer Harold Edgerton echoed Muybridges's interest and understanding to create the gelatin silver print "Gun Toss." Edgerton used a rapidly pulsing light of a stroboscope "to record states of matter too fleeting to be perceived by the naked eye," the caption reads.

The image of a hand spinning a pistol, its circuit recorded in enough stages to form a mandala of the weapon, seems to predict a later era's graphic arts aesthetic in balance and high contrast. I could easily see this engaging, frozen-motion work posted around town as a show poster for a band headlining at Abilene.

Several images reveal how the development of some photographic techniques were born of the needs of different curiosities and industries. NASA and The School of Aerial Photography have required ever-refined techniques for special circumstances — such as photographing large celestial bodies, one small portion at a time as the spacecraft orbited, with specialized equipment that could develop the images in the conditions of outer space, and send them back to the earth to be composited and studied.

Other images tell the story of the armed forces being trained as photographers and scientists during World War I, functioning as reconnaissance operatives about the lands far below the patrolling planes.

Though the technology has vastly improved since these first grainy images were made, these photographic artifacts serve to illustrate our first steps into developing these sharp, extensions of our natural eyes. When we compare the difference between the not-so-distant then and today, these images daunt, alluding to the inherent power of these fields' futures.

A few images illustrate photography's role in providing highly accurate dimensional measurements — a 1940's work by the PhotoMetric Corporation documents "PhotoMetric tailoring," showing a man undergoing a body scan to be fitted for a suit. But though this technology was developed slightly before mid-century, it hasn't replaced the tape measure and pencil.

In Frank Gilbreth's 1913-17 project, "Inefficient Work Operation and Efficient Work Operation," photography is employed to study and correct physical motion that contributes to worker fatigue — this would be of special interest to employers whose industries required entire shifts of repetitive motion. Using long exposures, Gilbreth recorded workers' movements while they wore lighted rings, which created visible traceries of their paths. The resulting images, one a tangle of unnecessary movements, the next far more minimal, reminded me of the recent trend of writing "graffiti" in the air with light.

Many works in the exhibit showcase how photography has been engaged in artful storytelling. At first glance, I took Nina Katchadourian's 2012 chromeographic development print, "Indian History for Young Folks, from Once Upon a Time in Delaware/In Quest of the Perfect Book," for a shadowbox encasing three actual vintage book covers. The crisp photograph is a composition of three juxtaposed book covers that together form a subtle nod to shifts in ownership, from native domains to "your national parks."