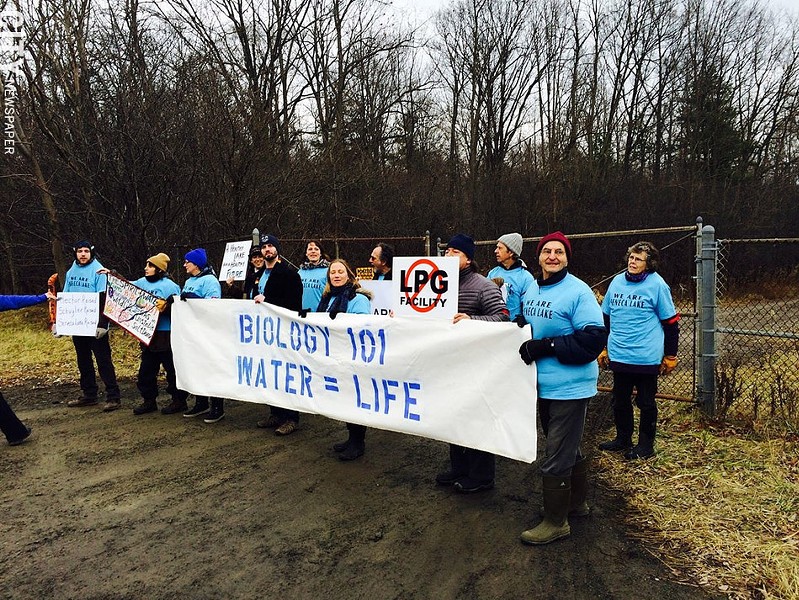 Photo COURTESy WE ARE SENECA LAKE Opponents of a plan to expand a natural gas storage facility along Seneca Lake have repeatedly tried to block trucks heading into the site.

Photo COURTESy WE ARE SENECA LAKE

Residents of the Finger Lakes are fiercely protective of the region's land and waters. As a result, the area is known for open roads and farmland; thick forests and sprawling vineyards; fresh air and, of course, gleaming freshwater.

Residents know full well that the 11 Finger Lakes are an asset that few places in the country — and possibly the world — can match. And after state government and tourism officials caught on, they began marketing the region as a world-class destination; a relaxing, romantic getaway with all of the outdoor recreation and fine wine a visitor could handle.

But along Seneca Lake — the largest of the Finger Lakes — residents and community leaders say that hard-won reputation is at risk because of two proposed underground fuel storage projects. They worry that the facilities will detract from the scenery, generate road-clogging truck traffic, and pose a threat to Seneca Lake's water.

"There's this vision that we can build this world-class tourist destination," says Joseph Campbell, co-founder of the activist group Gas Free Seneca. "We've already been called the No. 1 wine destination in the world. And that vision is incompatible with this industrial gas storage."

At issue are proposals from subsidiaries of Crestwood Holdings, a Texas-based company that deals in fuel storage and transportation. Both proposals involve storing fuels in dormant salt-mining caverns along Seneca Lake. The caverns are owned by one of the company's subsidiaries, US Salt.

In November, the federal government approved Crestwood's application to expand an existing natural gas storage facility approximately 2.5 miles north of Watkins Glen in the Town of Reading. The company will boost its storage capacity from 1.45 billion cubic feet to 2 billion cubic feet.

The other caverns, located at the same 576-acre site on state Routes 14 and 14A, would be used to store 88 million gallons of liquefied petroleum gas, better known as propane and butane. The project needs state approval, and the company's permit application is under review by the Department of Environmental Conservation.

Crestwood and its supporters have set up a website for the LPG project, www.nypropaneadvocacy.com. The site says that the storage facility would serve consumers across New York and the Northeast, and would help avoid price spikes such as those experienced by homeowners and businesses last winter. It would also add $650,000 in property tax revenue for Schuyler County, the site says, and 12 jobs.

But opponents say that the job and tax benefits don't compare to the contributions of the $3 billion Finger Lakes wine and tourism economy, which, they say, the storage projects put at risk.

On Christmas Day, the New York Times published an article laying out the conflict between Finger Lakes winemakers and the gas storage proposals.

The article illustrated just how far the region's wine industry has come; the Times treated the vintners just as they might winemakers from Sonoma or Bordeaux.

Finger Lakes wines are a major success story. Twenty years ago, even local consumers didn't think much of the wines, but now they're considered among the world's best. And Finger Lakes wines have brought new prestige to New York's entire wine industry. This fall, Wine Enthusiast Magazine named New York State its Wine Region of the Year.

Finger Lakes winemakers, as well as other agriculture and tourism businesses in the region, say that they fear that these gas storage projects could undermine what they've worked so hard to build.

"This is heavy, heavy industry," says Lou Damiani, co-owner of Damiani Wine Cellars on Seneca's east side. "Once they get their foot in the door, they're going to expand."

The chief concern is the industrialization of the Seneca Lake area. Finger Lakes visitors are, after all, coming to relax, to soak in the scenery, and to visit the growing numbers of wineries, breweries, and distilleries — the majority of which are scattered around Seneca Lake. They aren't coming to look at compressors and brine ponds, or to battle truck traffic. (Crestwood says that the traffic fears are unfounded because the fuels will be transported by pipeline and rail.)

That's not to say that the area is devoid of heavy industry. US Salt has operated on the western shore of Seneca Lake for over a century. And the area has been home to propane storage since the mid 1960's. Crestwood points to this history as proof that the wine and gas storage industries can coexist.

But there's a tipping point, Campbell says, where industry begins to disrupt tourism.

Predictably, Crestwood and its opponents differ on the potential safety and environmental consequences of storing natural gas and LPG in the caverns. And their conflicts center on some pretty complex issues, including the geology around the caverns.

The State Department of Environmental Conservation has scheduled a conference on the LPG storage proposal for February. It's meant to help the department identify facts and disputed issues that it should address during its review of Crestwood's LPG storage application. Opponents are primarily concerned about Seneca Lake's water quality; the lake provides drinking water for 100,000 people, including residents of Geneva, Waterloo, and Watkins Glen. Some of the communities around the lake, including the City of Geneva, have gone on record opposing the project.

This is where geology factors in. Geologists studied the caverns for Gas Free Seneca and concluded that the structures aren't suitable for pressurized gas storage, Campbell says. Brine from the caverns, which would be displaced by the stored gas, could be pushed into the lake, he says.

Seneca Lake already has higher levels of salt than any of the other Finger Lakes, storage opponents say. High-salinity water can be more expensive to treat for use as drinking water, they say, and could pose a problem for crops, too.

Opponents also say that they fear that gas could leak out of the caverns and pose an explosion hazard.

But Crestwood and its technical experts, including geologists hired by the company, say that the caves are perfectly suited to store the fuels and do not present a substantial safety risk. And the company notes that the state geologist determined there is no geological basis to reject Crestwood's LPG storage plan.

"The caverns are impermeable, and have the structural strength of steel, meaning no fluid or gas can escape through the surrounding salt deposit," Crestwood says on the www.nypropaneadvocacy.com website.

The company says that the Federal Energy Regulatory Commission wouldn't have signed off on the natural gas storage project if it wasn't safe.

Crestwood also has the federal government's permission to start work on the natural gas project, including upgrades to an existing compressor station.

But in October, a coalition of opponents called We Are Seneca Lake began regular blockades of the facility. To date, approximately 170 protesters have been arrested, including winery and business owners and staff. And opponents say that with each round of arrests, their numbers grow.

"As soon as we're arrested, then business returns to usual," says Dwain Wilder, a Brighton resident who was arrested when he participated in one of the blockades. "But my fondest hope is that we're able to actually just shut them down eventually and in time to keep them from getting the equipment to begin construction of the improved compressor station."