Fine dining in an alley

For newcomers to the Rochester area, Radio Social (owned by Dan and Noah Morgenstern) is a large bowling alley located on Carlson Road, a reincarnation of the regional staple Clover Lanes. But it's so much more than just a warehouse of lanes. It has two bars and various other games, including skee ball and pool. Aesthetically, passing through Radio Social's doors feels like you've left the present and entered a land of the future, as depicted in 1950s drawings of what folks thought the future would look like...but thankfully with substantially more cultural diversity.

After passing an Edward Wormley-esque zig-zag wood arch that houses the reception desk, the room opens to a cool white aura only interrupted by mint green and pale pink images of bowling pins, "X" strikes, and bowling balls on the far wall, giving color to the first eight lanes in the building. The environment of this wide-open, pastel cave came from local design firm Staach.

To the left is a wall of shiny old radios on shelves over a mid-century modern grey sofa. Farther down, past the shoe and paddle rental desk, is an expansive room with a second bar, 26 more lanes, and skee ball, dartboards, pool, shuffleboard, table tennis, and more. They somehow made the place look as bright as daytime but still dim enough to be a bar for singles. I am not sure what feat of optics they used to accomplish this, but Radio Social has mastered simultaneously being an all-ages venue and a place for grown-ups to mix and mingle.

Besides the gaming possibilities at Radio Social, Food and Beverage Director Chuck Cerankosky (of Restaurant Good Luck and Cure) leads the dining and bar staff to create each menu. They've cultivated a cocktail menu that rivals other speakeasy-esque bars, and the food options have always been a big draw. In the rear, there is the shortwave counter-service kitchen for those who want to grab wings or a pizza while hanging out at their reserved lanes. The front dining area, recently rebranded as Ophira, is the newest incarnation of Radio Social's in-house restaurant.

This is fine dining in a bowling alley. At first, that sounds odd, but having experienced it personally, it completely works. With the section of tables right next to the lanes, the intermittent rolling thunder and clatter of balls striking pins becomes background noise. But I was more focused on the food, anyway.

Ophira's menu is an homage to the Morgensterns' Mediterranean roots. Head chef Steve Eakins spent time in the owners' family homeland of Israel to study and experience the taste of traditional Mediterranean cuisine, then recreated those flavors here. The menu boasts everything from hummus to octopus. It was difficult to decide where to start. Fortunately, a custom, smoky whiskey-based cocktail ($8-$11) from lanky, potable-wielding bartender Mike Lake calmed my nerves.

Then Chef Eakins made my first culinary decision for me with a Salatin Platter ($19), a seasonally rotating platter of small vegetable and cheese dishes. On my plate were Kalamata olives roasted in blood orange and chili pepper flakes, roasted beets, fresh hummus, amba (a tangy-savory mango spread), and baba ganoush, all served with laffa bread. Laffa is a blanket of a flat bread, toasted lightly so that it has a smoky, crispy exterior but is soft and warm inside.

After devouring this sampler and perusing the menu some more, I decided that I needed the halloumi cheese, which I hadn't had since I lived in Cyprus. It's a brined, un-ripened version of goat or sheep cheese, a more solid cheese than its cousin, feta. At Ophira, it is lightly breaded and fried so that it is a bit crispy, and then served with mango jam, green chiles, and amba. Folks who are not big on cheese might like this incarnation, especially with the spicy-sweet toppings on it.

Deciding on my main course was a bit difficult. On a previous visit I had the duck wings ($12), which are lightly charred in the charcoal oven and topped with pomegranate molasses and red chili flakes. Never have I had duck as tender as a chicken wing until I had these. Since I already knew how good they are, I ventured out of my comfort zone and tried the roasted octopus ($16).

I find it difficult to find really good seafood. Sometimes it's over-cooked so much that it becomes rubber, but not here. I was presented with a small tower of fire-roasted octopus supported by wedges of sweet potato, all sitting in a bed of shallot jam. The octopus was cooked masterfully, with a crispy exterior giving way to meat as tender as a flounder. I could cut the pieces with just a butter knife, and it nearly melted in my mouth. The shallot jam was a good offset for the savory seafood. 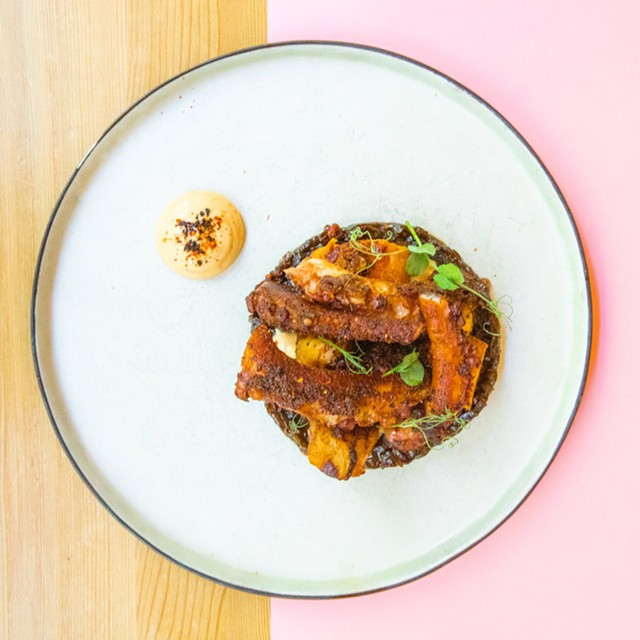 Eakins also brought out the Mountain Gnocchi ($12). I am not usually a fan of gnocchi's soft, gooey texture, but this was on a different level. Ophira's gnocchi is maakroun, a Lebanese version of the Italian pasta cooked in a toum (garlic sauce) so that it is slightly crispy on top. The result yields savory bites with a little bite back from the chile flakes in the sauce.

At the end of the meal, I decided to get a dessert. Lake whipped up an after-dinner cocktail, this time more citrusy, which was a perfect complement to the mango tart ($6). This contains malabi custard (a type of milk pudding) with chunks of mango in a crumble. I've rarely had a better finish to such a rich meal.