It was in the early hours of the morning in Kivulu, a slum in the capital city of Kampala, Uganda, that Rochester musician Jesse Sprinkle had an epiphany. While working with the Ugandan Water Project, Sprinkle visited a little hut called Paradise.

"It's actually a home run by a married couple and it's in the slums," Sprikle says. "I went in there and it was late — 2, 3 in the morning — and there were like 10 kids sleeping in this tiny room, and they didn't have a roof. They had a plastic tarp. It was raining and the water was just falling on these kids' heads. It's one of those things I couldn't really believe I was there seeing. It's the kind of stuff I could only imagine seeing in documentaries, and I was sitting right there."

Regardless, they called this little place Paradise.

"And to us, we would view it as a crappy little shack in the backyard you put tools in or something," Sprinkle says. "These kids go there so they're not sleeping on the streets where the cops will take them or random people can come and beat them up, so they're actually in a safe place. And we look at it, 'Eww, it's a dump.' So that next day I asked the people what is it going to take to get a real roof. And they said a few hundred bucks. So we got a work party together that week, tore off the old roof and put something solid up there."

Sprinkle is a musician, producer, father of four, and owner of Bluebrick Recordings in Avon, New York. He has a prolific output of recordings, both as a solo artist and as a member of multiple bands, including Dead Poetic and Demon Hunter. Since 2008 he has been answering the humanitarian call to Africa — he's already traveled to the continent six times — but felt there was more he could do with his specific skillset as a musician.

In 2012 Sprinkle started Paradise, Uganda, a musically based project that celebrates African musical culture while empowering African children in a world where they don't have much else.

Uganda is a country located in eastern Africa, south of Sudan. According to the CIA World Factbook, the life expectancy in Uganda is 53 and the average annual income is $490 USD. According to UNICEF, ongoing civil unrest, human rights abuses, and the AIDS pandemic have resulted in 2.5 million orphans living in the country. It seems hopeless, yet Sprinkle still felt compelled to help.

"I'd always wanted to go to Africa," he says. "And the timing seemed right to use my musical skills for something a little bit beyond what I was using them for. So the Ugandan Water Project took me there multiple times before I started to think how I could get my own niche. The organization was humanitarian, but they always incorporated music in events. And there's always music involved to some degree when you're with the people. It's a very musical thing. There were always events going on there with music incorporated into them."

Being a musician, it didn't take long for Sprinkle to get sucked in.

"I always did a little bit here and there," he says. "When I went out with the Water Project, I would get little chances to work with these kids, but the focus was also elsewhere. I wanted to do something where I could just focus on this. As soon as I began volunteering with the street kids in Kampala, which is kind of separate from the Water Project, I started realizing that their whole life is music."

"When I see kids on the street, like where I grew up in Seattle, a lot of it was just kids mad at mom and dad that ran away," Sprinkle says. "But these are true blue orphans. They're just this really great group of kids. I know they've made an impact on a lot of people's lives. They're really a rowdy, resilient bunch."

This cool, cultural quid pro quo got the wheels in Sprinkle's head turning. Why not produce a record with these kids? He would help focus their energy and enthusiasm, and they in turn would broaden his horizons. And any proceeds from the project could be funneled back to help their truly challenging way of life.

In August 2012, Sprinkle approached The Moho Collective's guitarist/multi-instrumentalist Kurt Johnson about joining him as a partner in the project. Johnson had studied cultural anthropology and music from around the world, and his brilliant interpretation, exploration, and augmentation of cultures and music made him a perfect fit for what would become the Paradise, Uganda Project.

Johnson says, "We were tracking guitar for one of Jesse's songs and he said, 'You should come to Africa with me.'" Johnson was jazzed at the prospect. "Honestly, I'd been waiting about four years for him to ask me that."

So with Johnson on board, and taking the name from that battered orphan hut, Paradise, Uganda was born in 2012. Now Johnson, Sprinkle, and violinist Aaron Hall are set to travel to Uganda in April to record an album with local musicians and the children.

"The message that came as we were creating this project," Sprinkle says, "was the fact that we named it Paradise after this home. I want to believe we can tell people paradise is a term that can relate to us no matter where we're at, no matter how much we have. It's a lesson to even us in the United States, that people who don't have anything can say this little place is paradise to them. And if we can help people create that paradise in different ways..."

But what about those that may find music trivial, or fairly low on the list of priorities in the face of more pressing concerns like AIDS, hunger, or civil unrest?

"I think we get more opposition [in the United States] than we do over there with people saying, 'How is music going to help these people?'" Sprinkle says. "But I think we want to start with music and go further. I try to look at it as realistically as possible. We're welcomed with enthusiasm. I know they genuinely love us. Some people may view it as a means to an end. But I don't really care, as long as there are some real relationships happening and there's some progress being made. Sometimes you'll get people looking at you as the rich white man. But for the most part, it's very encouraging."

Johnson knows how it may look to detractors. "We show up there," he says. "A few white dudes who have raised a bunch of money, to make music with them... I don't want that to be a problem. This is the beginning of a larger relationship. And a roof here and there, food, shoes and clothes...that's all going to be part of this while we're doing it, that's for sure. Anybody who has made music knows that something happens sometimes where you forget where you are, forget everything that's going on around you."

"Hopefully we can make a difference in some lives that will affect the big picture in the long term," Sprinkle says.

Within this big picture is an internal conflict for these American musicians. They can go home to a roof, a dry bed, and food. "There are two sides to that," says Sprinkle. "It is convenient for us to go there, knowing we can then go home. But the people out there really value that we came halfway across the world to their culture. Because they know Americans are scared of being in Africa, and either getting sick or bitten by something."

Sprinkle says that most of the people they work with in Africa "know that we've sacrificed to be out there. They don't have the physical, tangible things we do, but they have a sense of joy we envy. Whenever I get home from trips, I have this strange depression wondering how to relate that universe to my home. How do you reconcile?" 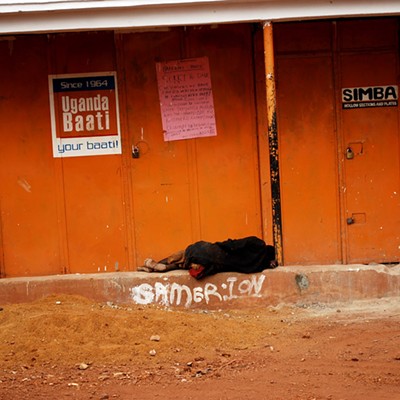 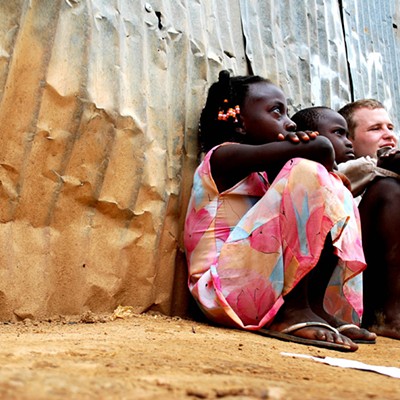 The Paradise, Uganda project addresses this disparity though its celebration of musical diversity and harmony. For everything that is different between the two cultures musically, there is something they both share, whether it's in time signature, rhythm, or the lyrics. Understanding this makes for a healthy musical discourse that reflects on all aspects of the lives involved. Sprinkle says they're not changing the world overnight. Life lessons take a lifetime, after all.

"My hope," Sprinkle says, "is that this project will bring [the children involved] purpose and direction and hope. And, perhaps for a handful of kids, a way out. If we can give the message, 'You're important enough that we're going to come across the world to do an album with you and try to, not only encourage your music, but hopefully encourage your life overall,' that's something."

"We're working musicians and want to show them this is a way you can approach your life," says Johnson.

The curious part in the meeting of these two cultures is who exactly is bringing what to the table. Poverty dictates a lot of technology and its availability, but that's countered by Sprinkle and Johnson's reverence and reference to tradition.

"Ironically," Sprinkle says, "a lot of their music is processed because of budgetary issues. If you go into a studio there, they just throw up a computer beat and you sing over it. You think of African music as organic. So we want to bring that into it as much as we can." So in some instances, Sprinkle and Johnson are actually the traditionalists in the equation.

The two Rochester musicians are currently in cyber pre-production, e-mailing riffs, arrangements, and concepts back and forth to the musicians they're working with in Uganda — members of the community who are in charge of the children, or have their respect — along with the children, who are collectively known as The Kampala Street Singers.

"We want to have as much done as possible before we get there," Sprinkle says. "But there will be a spontaneous factor. We've got people in Uganda listening to the concepts we've come up with to see if they want to write with that or send us their own concepts. Also there are about 100 kids in the community. We have to pare it down to those who can and will do the work. It could narrow down to, like, 10 kids. Three of the kids have died since I started this. Some get arrested, some get the chance to go to school."

Part of the pre-production is the task of raising cash to cover expenses. Through the fundraising website Indiegogo.com, Paradise, Uganda initially raised about $14,000 of its $20,000 budget.

"The business details can really suck," Sprinkle says. "I've been to Africa six times and this is the most involved trip. Usually it's raise some funds, go out there, enjoy it. This time it's all this stuff."

This trip is designed to yield an album, due to drop sometime in June, with its proceeds going back into wherever it is most needed in the Kampala community at that time.

"While we're over there we will be researching specific needs," Sprinkle says. "And what's most urgent at the moment."

The plan is to return and do a concert, getting the kids to perform. "And who knows what that will lead to," Sprinkle says.