Amid news this last weekend of a second bomb threat to the Jewish Community Center of Greater Rochester — and the third case of anti-Semitic hostility in Rochester in recent weeks — Deborah Haber is pushing onward to finalize plans for a series of arts events that will be held this month at the JCC and Nazareth College. "Finding Home: Shine the Light" is a multi-media community show exploring refugee displacement and the search for home. Sadly ever-relevant, the project spotlights different groups that have been displaced and the struggle to start over in new, often hostile places.

Haber says that while the intimidation is shocking, support for the Jewish community is becoming even stronger. "People are rallying around not only our JCC, but also JCCs around the country," she says.

The JCC will host a fine art glass exhibition and silent auction, and Nazareth will host a photo exhibition of Charlotte Schmitz's images of contemporary refugees from Syria, Iraq, Afghanistan, and elsewhere.

The project's roots evolved from Haber's idea to create a musical to commemorate her own parents' story of displacement. Four years in the making, "Moses Man: Finding Home" tells the story the two Holocaust survivors' nine-year journey from Vienna in 1938, through Europe, and finding hope, freedom, and home in America in 1947, Haber says. "For them, a pathway to 'finding home' was relentlessly obstructed, and their journey's end seemed unobtainable."

But as she worked on the show's book and lyrics, with Casey Filiaci composing the music, Haber looked around the world and saw that little has changed. "This is now the plight of millions of desperate, displaced people in the world suffering with little or no hope of respite," she says. 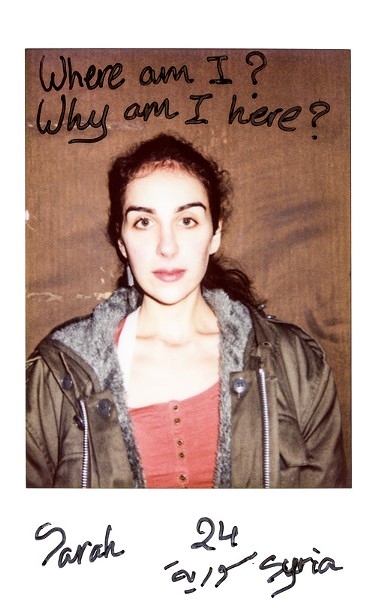 Haber describes the effort to make a musical about the Holocaust as conjoining "Fiddler on the Roof" and "Les Miserables," and focusing on perseverance amid discrimination and danger.

Haber and Filiaci noted important parallels between refugee issues of the past and present. While workshopping "Moses Man" in the 2015 New York Musical Festival, Germany opened its borders to waves of refugees from the Middle East. "Casey and I looked at each other and said, 'Wow, are you seeing this?' We knew we had to do something," she says. They decided to take a step back and address this issue in the play in a way that wasn't just a token, superficial afterthought.

Through a connection with a professor at Indiana University, Haber planned an "Art and Refugees" symposium at the college, which will take place in April. But it was important to Haber to bring this project to Rochester, where her story began, so she reached out to Nazareth College president Daan Braveman, who was enthusiastic about it all.

Nazareth will showcase "Take me to Jermany" (sic), a series of polaroids of refugees taken by Charlotte Schmitz. Each of the photos have writing across the image by the subjects in the shots, which provide personal testimonies of what is happening to them.

Haber says that her project's emphasis is not on political ideas, but on human compassion. "Refugees are not disposable people," she says.

Because Nazareth has limited space, the JCC will host the fine art glass exhibit and silent auction. The exhibit "Shine the Light" will present Laura Donefer's "Todesmarche Revisited," an installation of cast glass and cement footprints — some of which were taken from actual Holocaust survivors — created in commemoration of those who were forced into the Nazi's death marches.

Additionally, on Thursday, March 30, the creators of "Moses Man: Finding Home" will present "Finding Home: Creators' Journey of a New Musical," a multi-media exploration of the creative process and how current world events keep transforming the musical. The presentation will take place at 7:30 p.m. in Nazareth College's Linehan Chapel. Admission is free.

Haber is also working with Blue Sky Project to create a documentary about the ongoing process of creating the musical, from its Holocaust origins to the inclusion and collision of contemporary refugees' journeys.