Protest chronicler Martin Hawk is under pressure . . . and fire

October 02, 2020
Until this summer, the coat rack in Martin Hawk’s home was a spot to set his keys and wallet and other everyday personal items. Now, it’s a place for his gas mask.

“None of us were prepared for the tear gas and the pepper spray,” Hawk says. 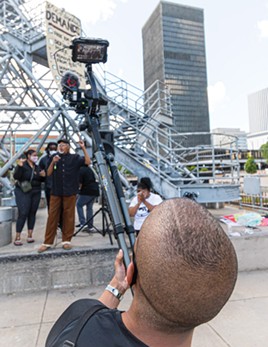 Hawk is a photographer embedded in what he calls the “battleground” of downtown Rochester, documenting the Black Lives Matter demonstrations that have rattled the halls of power and earned international media attention.

In some ways, the 28-year-old Hawk is like the scores of video journalists who take the streets nightly to capture the unrest. But Hawk has no media credentials, and could better be described as an artist and a concerned citizen who is, as he put it, treading the “intersectionality between arts and activism.”

“I felt compelled to be just another person with a camera, just understanding how important it is to capture all this,” Hawk says. “It’s a watershed moment not just for the world, but also for Rochester.”

Hawk is working with the State Street gallery UUU Art Collective to install an exhibit of his images and video footage in a chapter-by-chapter story of conflict called “Pressure Gradient.” He sees the work as a snapshot of a small American city at a time of transformation.

It is not just the acts of civil unrest that compel him. He is motivated by the underlying racism, whether overt or unintentional, built into longstanding systems — police departments, courthouses, City Hall — that make the country what it is.

“As a person of color, it’s interesting,” Hawk says. “A lot of my white friends, they feel activated now, and it means the world. But we get sent these videos, right? Sort of like, ‘Can you believe this happened?’ And you know, again, it’s shocking and it’s important for people to see these videos.

“But, I mean, we have to keep in mind that Black people have been watching these videos for . . .” Hawk trails off, as though calculating countless outrages. “Years.”

The videos of which he speaks are, of course, the two that have circulated the globe many times over.

The first was that of the life being squeezed out of George Floyd by a Minneapolis police officer on a street corner in broad daylight in May. That lit the fuse of the nation’s powder keg.

But two months earlier, Rochester police officers confronted a naked, belligerent, and distressed Daniel Prude, in the early hours of a freezing morning in March. They handcuffed him, placed a “spit hood” over his head, and then proceeded to restrain him on a wet street under light snowfall to the point of asphyxiation.

When video of that incident came to light last month, it sparked something in Hawk.

“In that instance I learned about it, boom, I ran right out of the door with my camera gear,” he says. “Unprepared, but just willing to just, having to do something. I just knew that I needed to be a witness to it.”

In the opening chapter of “Pressure Gradient,” his audience bears witness to it as well. It is cinéma vérité. Police cars glide like silent predators though the dark streets of Rochester, his camera seemingly following alongside them unseen. Demonstrators gather outside the home of Mayor Lovely Warren. The curtains remain drawn.

Pressure gradient is a weather term, a measurement of wind direction and force. Hawk applies it to his art as a measure of social change. “It’s the exploration of the shades between love, rage, and rebellion as a Black person surviving in America,” he says.

The work is a full-blown production that Hawk says he is self-financing, pouring money into a mini-production suite in his home. It could take months to cull his footage — a duration for which the fast-moving story will not wait.

The compromise was to release his work in chapters, which he says could have the effect of galvanizing support for the movement.

Yet he views the movement he is capturing as a marathon, not a sprint.

“As black people, our entire existence is a marathon in resistance,” Hawk says. “As the ’60s went, as our struggle continues, there is no sort of resolution, right? There is only the continuation, so if I can help showcase what happens in a once-gilded, rustbelt city like Rochester, I think that that can really lend, in many ways, a more-universal narrative to the populace at-large in America and the world.”

“We have in a way become the face of police brutality in America,” Hawk goes on. “Just the symbolism alone with the spit hood in the middle of winter, it’s a powerful image and I think ‘Pressure Gradient’ will, hopefully, show that struggle.”

Hawk is no interloper. Rochester is his hometown.

He grew up in Pittsford, graduated from Mendon High School, and briefly attended Nazareth College. He moved to New York City, toured with a musical theater company, then launched a career in electronic music. He records soulful vocals under the name “midnight” — lowercase “m.” Having returned to Rochester in 2016, Hawk and his partner, a social worker in refugee care and adoption, live in the South Wedge, where Hawk indulges his passion for filmmaking.

Civil unrest is not new to Hawk.

As he tells it, he was maced in high school while attending a demonstration against the Iraq War in New York City, where he was studying for a time. When he worked in Los Angeles, he says, he attended a women’s march that drew hundreds of thousands of people.

But aside from showing up at a protest against a developer acquiring the weary Cadillac Hotel a few years ago, “Here in Rochester,” Hawk says, “ashamedly, I had never been a part of anything.”

Now, he has the battle scars to show for his involvement.

In early September, he recalls, he was shooting video of a woman being arrested by five officers outside the Public Safety Building during a clash between protesters and police armed with PepperBall launchers. One officer had her on the ground, Hawk says, a knee planted on her back.

“I turned around and a cop says to me, ‘A media badge isn’t a free pass,’ and he shoots,” Hawks says. “I was about six feet away, and keep in mind these PepperBalls are supposed to be used as a last resort, they’re supposed to be hit off other objects so that their pepper spray can disperse. And it hit me directly at the base of my neck, which broke it open. Luckily one of the medics out there was able to wash away the blood. Before that it had broken open my skin and the powder had gone in.”

Later, Hawk posted on social media images of the battering he endured: eight massive bruises, with five of them on his left leg, and another on his ribs from what he believes was a rubber bullet.

In some ways, though, he is grateful, even if it means having to keep the gas mask on the coat rack.

“It finally took the George Floyd movement and everything for me to actually become activated within my own community that I live in,” Hawk says. “So I’m trying to make up for lost time.”