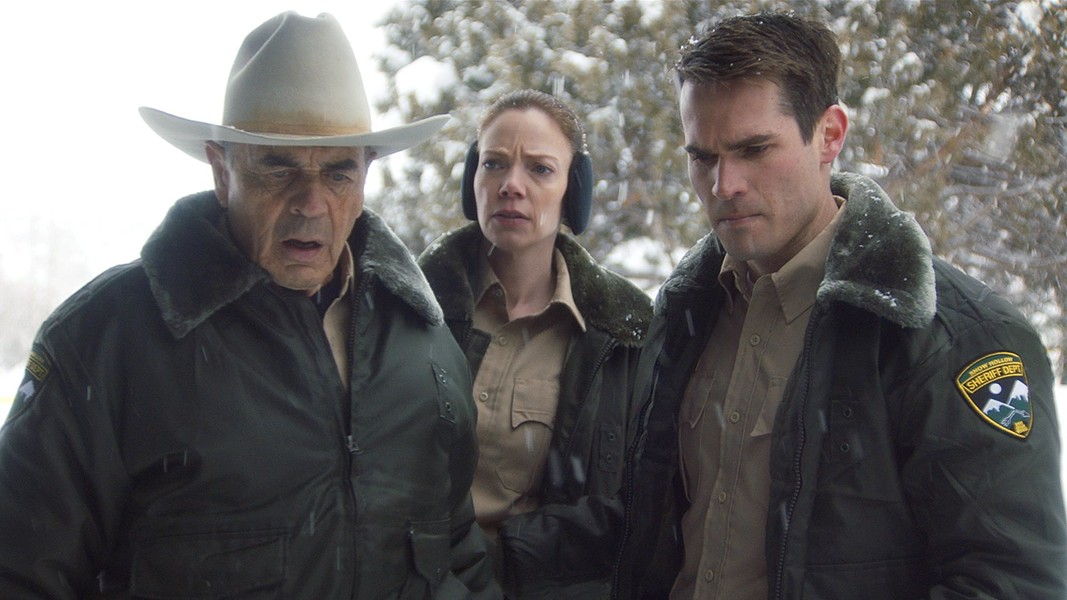 “The Wolf of Snow Hollow”
(R), Directed by Jim Cummings
Opens Friday, October 9 at the Vintage Drive-In, 1520 W. Henrietta Rd in Avon,  and on VOD

Spooky season is officially upon us, and “The Wolf of Snow Hollow” arrives just in time to capitalize on audiences looking for a frightful night of movie entertainment. It’s a werewolf tale that’s darkly funny, though calling it a horror-comedy feels like overstating both sides of that particular coin. More notable is the fact that the film contains the final screen performance of the late, great actor (and Rochester native) Robert Forster.

There’s a mysterious killer prowling the wintry mountainside town of Snow Hollow, leaving a trail of mutilated corpses in its wake. The killer doesn’t seem to distinguish between vacationing skiers and local townies, though young women specifically appear to be a target. Forensics suggest the attacks are being carried out by a large animal, but the fact that the killings happen to coincide with the full moon has led some to speculate that they’re the work of something more supernatural in nature.

Writer-director Jim Cummings stars as officer John Marshall, a recovering alcoholic dealing with all manner of family issues. He has a contentious relationship with his ex-wife, and things aren’t a whole lot better between him and his teenage daughter, Jenna (Chloe East). He’s also attempting to care for an ailing father (Forster) who happens to be the town sheriff, and who’s doing his best not to appear that he’s ailing one bit. Add in the pressure of a case that the whole town is increasingly desperate to have resolved, and Marshall is soon barreling full-speed toward a relapse.

He might get some support from the rest of the department, but his style of leadership more often involves berating his fellow officers. Hardworking officer Julia (Riki Lindhome) in particular proves herself a more-than-capable investigator, which is a good thing since she’s often left to pick up the slack when Marshall inevitably loses his cool. And he’s adamant about reminding everyone who’ll listen that there's no such thing as werewolves.

At its heart, the film is a character study and a whodunit that’s much more interested in the human characters roped into its mystery than any potentially bloodthirsty creature that propels it forward. The tone never dips too far toward the funny or the scary, and “Snow Hollow” is more than content to operate on its own unique wavelength.

Cummings strikes a tricky balance with the film; there’s no question Marshall is the center of its story, but the screenplay is careful to never condone his often reckless behavior. The mystery becomes almost an afterthought as Cummings explores the film’s underlying ideas of thwarted masculinity and addiction.

Though Forster’s role is very much secondary to Cummings, even with a smaller part he’s able to invest his character with depth and empathy. And his scenes with Cummings are touching, lending the film a bit of heart along the way. Marshall’s tricky relationship with his daughter is another thread that yields more than a few poignant moments.

The wintry, small-town atmosphere serves as an effective backdrop to the action, and the wooded mountain locations are filmed with a crisp clarity by director of photography Natalie Kingston.

We’re overdue for a renaissance of the werewolf genre, and with any luck, “The Wolf of Snow Hollow” might be just the film to kickstart the trend. Though the supernatural monsters end up taking a backseat to its examinations of the monsters within, its story is still capable of sending a chill up viewers’ spines.