Directed by Trey Edward Shults ("Krisha" and "It Comes at Night"), the flawed but deeply-felt domestic drama "Waves" is essentially two movies in one. Split into a harrowing first half and an elegiac second, the film seeks to encompass the broad spectrum of human experience through the lives of a black, American, middle-class family.

The first section exposes the cracks in the family's seemingly happy lives, and centers on son and high school senior, Tyler (Kelvin Harrison Jr.). A star athlete on the wrestling team, Tyler grapples with the expectations placed on him by his demanding father, Ronald (Sterling K. Brown), who's constantly pushing him toward perfection. 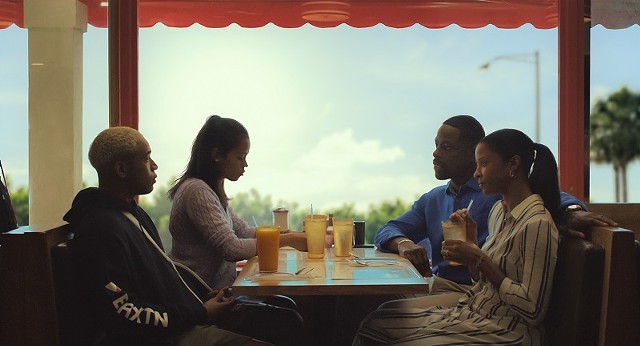 Though his more cool-headed stepmother Catharine (Renée Elise Goldsberry) does her best to balance out her husband's domineering nature with warmth and affection, it's not enough when things start to go south for Tyler. First he suffers a shoulder injury that threatens his athletic future, then Tyler's already tumultuous relationship with his girlfriend Alexis (Alexa Demie) turns even more fraught when she surprises him with the news that she's pregnant. Ill-equipped to handle these additional stresses, he takes some impulsive actions that turn things from bad to worse.

Harrison is wonderful in a more raw, hot-blooded performance than his work in "Luce" earlier this year. Like that film, "Waves" examines the burden — both internal and external — of living up to impossible societal standards, particularly for young black men. "We're not afforded the luxury of being average," Ronald tells his son, but the weight of all that pressure pushes Tyler's psyche to the limit, sending him spiraling toward a dark and destructive place.

The film's gentler second half expands its narrative to one of redemption, forgiveness, and regrowth as the family struggles to come back from tragedy. The focus now shifts to Tyler's shy kid sister Emily (Taylor Russell) who, like the rest of her family, is dealing with a guilt that threatens to overwhelm her. She gets some unexpected assistance as she embarks on a tentative first romance with her sweetly awkward classmate Luke (Lucas Hedges), who has daddy issues of his own.

"Waves" is an admirably ambitious undertaking, and for better or for worse, Shults swings for the fences in every moment. Set to a breathless synth score composed by Trent Reznor and Atticus Ross, the kinetic camera work succeeds in creating a claustrophobic atmosphere as Tyler careens toward tragedy. But the ostentatious style and sensory overload serves as a barrier that left me feeling always on the outside looking in.

The filmmaker's visceral direction draws attention away from the heart of its characters, preventing the film from digging as deeply into their interior lives as the story requires (Emily and Catharine especially suffer in this regard).

In trying to tell a small story with such an expansive scope, Shults' ambitions too-often overpower the intimacy he's after. The feverish incident and lack of resolution to Tyler's storyline clashes with the more meditative tone of Emily's section, leaving the film feeling disjointed. As the narrative piles on one early crisis after another, the script resorts to painting in broad strokes, and starts to seem a bit heavy-handed; manufactured to fit the neatly bifurcated structure of the film.

Shults tries to achieve so much here that it's impossible not to respect his efforts, especially when they're aided by such stellar performances from his actors. But in the end, "Waves" feels more like an interesting experiment than a wholly satisfying film. It does, however, leave me excited to see where the filmmaker's ambitions take him next.