Black and white and red all over 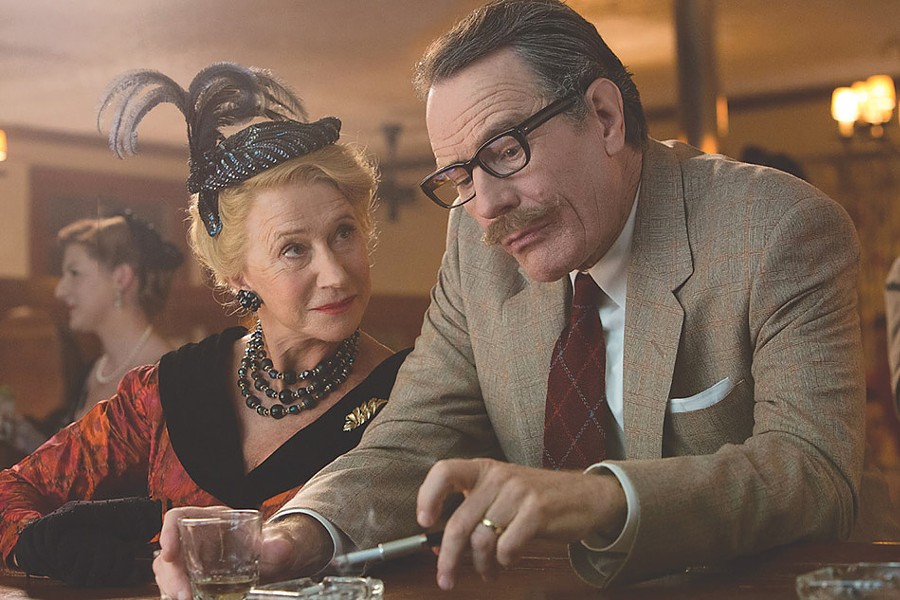 Focusing on the life of famed screenwriter Dalton Trumbo (portrayed by a bombastic Bryan Cranston), director Jay Roach's earnest historical drama, "Trumbo," documents one principled man's fight for his ideals, set against one of the most shameful chapters in Hollywood (and America's) history. When Cold War paranoia gave rise to the House Un-American Activities Committee's anti-communist witch hunt in Washington, the committee claimed to be fighting the "ongoing communist threat" in the belief that certain unsavory characters were working inside Hollywood, plotting to overthrow the government by planting radical ideas inside what was ostensibly wholesome film entertainment. Any American affiliated with the Communist party was labeled a traitor to their country and blacklisted -- it's not hard to see more than a few parallels with the current manipulation of public perception and fear-mongering against those of the Muslim faith.

Significant pressure comes from actress-turned-gossip-columnist Hedda Hopper (Helen Mirren taking clear delight in both her character's villainy and an endless parade of fabulous hats). With a clear axe to grind, Hopper wields her considerable readership as a weapon; Hopper's brand of shrewd self-righteousness will be familiar to anyone who's turned on Fox News recently. Bowing to HUAC and Hopper's influence, many of the studio heads voluntarily scrubbed their films of any potentially "subversive" ideas and barred some of the industry's best from finding work. The most enduring lesson of the period is that if the public is made fearful enough, they'll be more than willing to toss aside their essential freedoms.

The film's script, written by John McNamara and adapted from Bruce Cook's biography, follows Trumbo's trajectory going from one of the highest paid writers in Hollywood, to member of the infamous Hollywood 10 (a group of film workers who refused to name names and went to federal prison for contempt of congress). Faced with unemployment following his time in jail, Trumbo finds a way to game the system, securing work for himself as well as several of his writer friends by producing cheap B-movie scripts for the King Brothers (John Goodman and Stephen Root) under pseudonyms. In between writing schlock, Trumbo succeeds in writing several films that turn out to be pretty good, and even manages to win a couple Oscars (also using pseudonyms), only serving to further infuriate his enemies.

It's an undeniably fascinating story -- though the considerable time the film devotes to the domestic side of Trumbo's life, and the strain his battle puts on his family, is significantly less interesting. His wife, Cleo (Diane Lane, once again playing the put-upon wife who's called upon to do things like look on disapprovingly as her husband starts popping amphetamines like candy), and oldest daughter, Niki (played by Madison Wolfe, then Elle Fanning post Trumbo's jail stint, making for a somewhat jarring transition, but it's easy enough to look past) bear the brunt of Trumbo's bluster. The film sees Trumbo as a hero but not a saint, capable of incredible arrogance and a tendency to steamroll those who get in his way.

"Trumbo" boasts a fantastic supporting cast including Alan Tudyk as Ian McLellan Hunter, whom Trumbo convinces to take credit for his "Roman Holiday" script. And comedian Louis C.K. delivers an award-caliber performance as fellow writer Arlen Hird. Cranston and C.K. share a lively chemistry and the scenes in which the pair argue over their ideological differences are among the film's best. A number of the period's most famous stars get memorable moments, including John Wayne ("JAG" star David James Elliott) and Kirk Douglas (Dean O'Gorman), who approaches Trumbo to write "Spartacus." Michael Stuhlbarg offers a reined in performance as actor Edward G. Robinson, a figure with such a distinctive voice and persona that it'd be easy for an actor to settle for cheap imitation, but Stuhlbarg never takes the bait, delivering a wonderfully effective, naturalistic performance.

Best known for slapstick-y comedies like "Meet the Parents" and "Austin Powers," Jay Roach seems an unexpected choice to direct this sort of material (though he's also responsible for the HBO political film "Game Change"), but he acquits himself well. He's perhaps helped by the fact that Trumbo is already a larger-than-life figure and Cranston clearly relishes the role. Hollywood loves to tells stories about Hollywood, from "A Star is Born" to "The Artist," and if there's a relevant historical aspect to the story, all the better. Since most of the film's major characters are successful wordsmiths, there's a lot of clever banter, which makes the history lesson go down easy. All these strong elements all come together to make "Trumbo" a solid movie, even if it never instills much passion.