"The Wolf of Wall Street"

Initially, the heavily hyped Martin Scorsese film, "The Wolf of Wall Street," seems an unusual effort for the director of so many dark, urban crime stories rich in violence and ethnicity. The rollercoaster ride of his latest movie offers a different set of subjects, situations, and characters -- no cops, no mobsters, no shootings, stabbings, and beatings, no sense of a troubled Catholicism. In short, there's no hint of the director's famous mean streets and all they comprehend.

At the same time, despite the apparent departures from many of his previous works, the picture demonstrates a number of familiar Scorsese touches. To begin with, the movie deals with a gang of criminals, albeit of the white-collar variety, an unscrupulous group of stock manipulators and swindlers, the kind of people who regularly populate the daily headlines. Based on the memoir of Jordan Belfort, the actual leader of that actual gang of crooks, in many ways it resembles another fact-based Scorsese film, the gangster flick "GoodFellas." 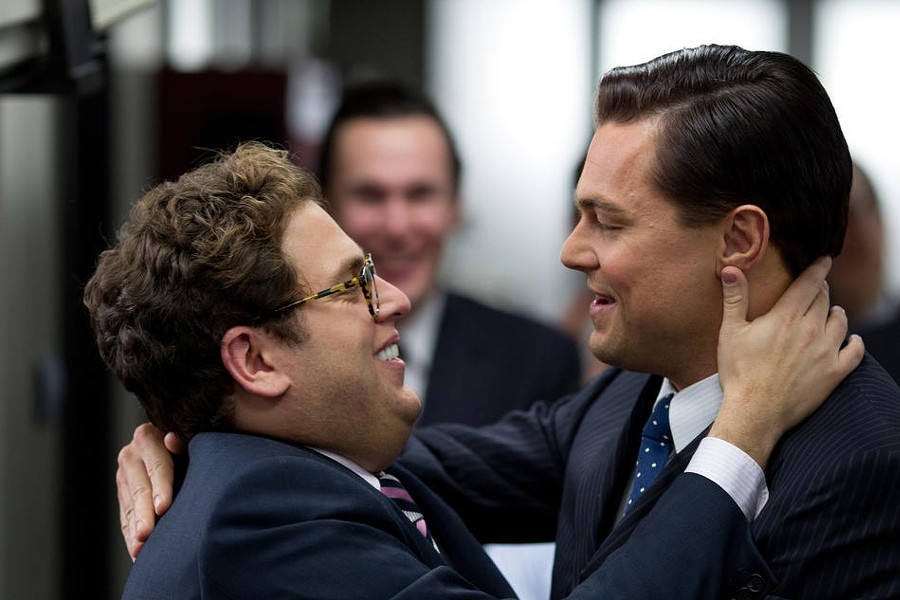 In a voice-over narration -- another Scorsese favorite -- Jordan Belfort (Leonardo DiCaprio), sounding a good deal like Ray Liotta and often addressing the audience directly, begins with an account of his enormous monetary success, listing his grand houses, his six cars, his yacht, and his stunning trophy wife (Margot Robbie), then flashes back to his early days as a fledgling stockbroker with a legitimate Wall Street firm. Almost as soon as it begins, his career ends with the 1987 stock market collapse, but Belfort finds work in a sleazy Long Island boiler room operation, selling penny stocks to naïve investors, and fleecing them for all they're worth. His success at the boiler room leads him to found his own firm of swindlers with his faithful sidekick Donnie Azoff (Jonah Hill), launching him and his cohorts into the financial stratosphere.

Most of the movie concentrates on Belfort's meteoric rise and the ways he and his firm of greedy wastrels spend their astonishing wealth. The stockbrokers consume mountains of cocaine, a whole pharmacopeia of uppers, downers, and in-betweeners, various morphine derivatives, and the great favorite of the era, Quaaludes. Belfort lists all the substances he ingests, then ranks the genres of prostitutes he and his colleagues hire, according to appearance, talents, and likelihood of infection.

Throughout the film he combines the sex with the drugs, frequently snorting cocaine off the naked bodies of gorgeous women. When he journeys to Switzerland to hide $20 million in cash, he creates a sort of portable orgy, attempting drug-crazed sexual assaults on the female flight attendants. A kind of comic decadence pervades most of his interactions with his employees, who dance and sing and chant along with their leader, glorying in the millions they make by pumping up stock prices and overselling worthless paper; he pays a secretary $10,000 to have her head shaved in front of the whole firm and in one precious moment, he and his partners discuss the rules of dwarf-tossing, a betting game they play in the film.

Distressingly, especially for a Scorsese picture, "The Wolf of Wall Street" establishes no moral center, barely hinting at the smug, audacious criminality of Belfort's work -- he served time in prison -- and never mentioning the lives he ruined. Nor does the script even hint at the continuing illegality of what a Republican presidential aspirant called vulture capitalism. Worst of all, it seems highly likely that the glamorous presentation of stock fraud and its benefits for its practitioners -- the expensive luxuries, the untrammeled decadence, the wallowing in sex and drugs, the jubilant celebrations of sheer greed -- will inspire a whole new generations to seek an MBA and a job on Wall Street.