"The Secret Life of Walter Mitty"

The first movie based on James Thurber's most famous short story, "The Secret Life of Walter Mitty," was adapted for the screen back in 1947, starring the multitalented Danny Kaye in the title role. Walter Mitty, a timid, passive, henpecked husband, embarrassingly incompetent at ordinary tasks, constantly falls into daydreams in which he assumes such heroic roles as flying through a storm, shooting down German aircraft, and performing delicate surgery. Everyday life triggers his fantasies -- a headline about a trial inspires him to see himself in a courtroom, passing a hospital leads to his surgical feat. The story ends with a characteristic Thurber touch of comic defeat. 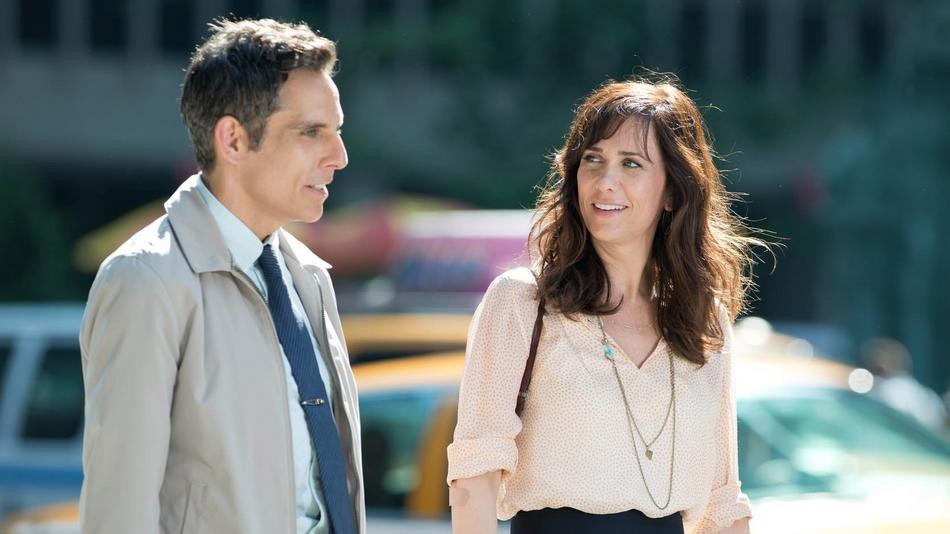 The work seems a natural for the cinema, the art of dreams and daydreams; film quite naturally exploits the transitions from a present reality to the insubstantial but far more satisfying subjects of memory and fantasy. We all dream, after all. We all want to be the heroes of our own lives. We all need to escape from what one of my favorite authors calls the deadly rhythm of our private thoughts.

In this adaptation of the story Walter Mitty, played by Ben Stiller, works for Life magazine, in charge of the negatives their photographers submit from all over the world. He discovers that the magazine is folding, moving to an online version, which means he and many others will lose their jobs. Lonely, burdened by the cost of moving his mother (Shirley MacLaine) to an assisted-living facility, he tends to fall into a sort of trance. His fantasies feature him making a connection with Cheryl Melhof (Kristen Wiig), a young woman at the magazine, rescuing the inhabitants of a burning building, humiliating the arrogant executive in charge of the transition.

Walter finds the opportunity to become a hero accidentally, when he searches for a lost negative from the magazine's ace photographer, Sean O'Connell (Sean Penn), intended for the cover of the final issue. He takes off on a wild and unlikely journey looking for O'Connell, which takes him to Greenland, Iceland, Afghanistan, and the Himalayas. He travels by plane, boat, bicycle, helicopter, and even skateboard on his quest, encountering eccentric people and strange adventures along the way.

Although the quest itself takes place in Walter's "real" life, he often falls into his daydreams in the midst of what already seems a fantasy. In one of the oddest and funniest sequences, he encounters a drunken helicopter pilot singing in the only karaoke bar in Greenland, then discovers the guy can lead him to the photographer. The chopper promptly drops him in the sea, which leads to yet another series of adventures and fantasies. At times the director deliberately fuses and confuses Walter's actual experiences on his unusual quest with his usual daydreams.

Although it toys with the visually fascinating concept of dreams and their possibilities in ordinary life, "The Secret Life of Walter Mitty" seldom explores the theme with the imagination it deserves. Walter's search, the mysteries he must solve, the completely unsurprising pat ending, and the tiresomely predictable love between him and Cheryl simply overwhelm the notion of the dream life and its connections to what we like to regard as real life, that endlessly fascinating subject for the cinema.

Ben Stiller has come more and more to resemble Woody Allen in the sense that he continues to play the same character over and over in all of his movies, an earnest, naïve victim of an assortment of nasty, plotting dopes, who ultimately triumphs, mostly through his own innocent good nature. His Walter Mitty is virtually interchangeable with the parts he played in "There's Something About Mary," "Meet the Parents," "The Watch," and so on. On the other hand, "Walter Mitty" provides him with a Mittyesque experience, directing a picture in which he plays the adventurous hero of his own fantasies, possibly a fantasy within a fantasy.

Oddly, the sets play the most interesting part in the movie. The Time-Life building is the real thing, and the sequences in Greenland, Iceland, and the East look very real indeed, and employ people native to those regions. "Walter Mitty" may not be good, but it looks great.