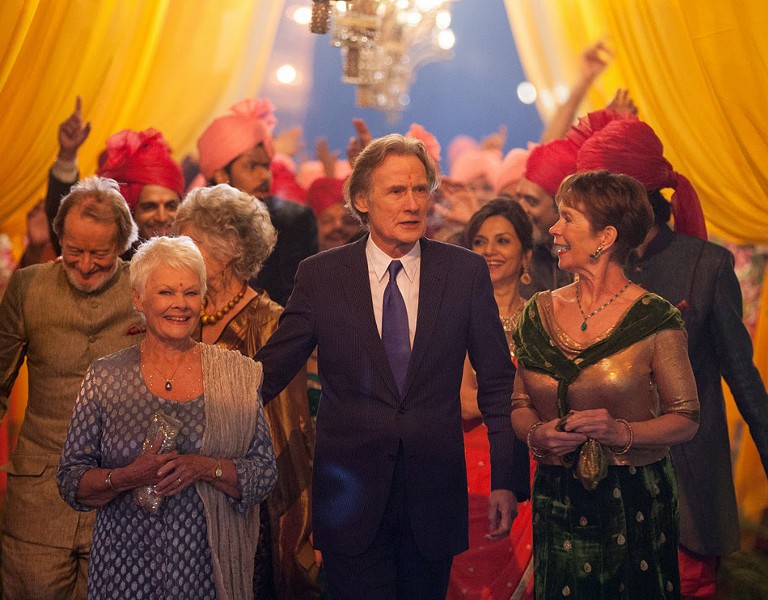 Just as diehard comic geeks had "The Avengers," aging Anglophiles received the gift of "The Best Exotic Marigold Hotel." The film delivered its own sort of superhero team-up by bringing together the powerhouse thespians of British cinema, and it now proves that franchises aren't just for big-budget blockbusters. A pleasant diversion, "The Second Best Exotic Marigold Hotel" returns us to the Jaipur locale of the rustic resort which we last saw helping nearly the entire staff of Hogwarts find a late-in-life renaissance.

Much like the current spate of films in the Marvel Cinematic Universe, the hotel is also in the midst of an expansive "phase two." Still managed haphazardly, but with much enthusiasm, by Sonny (Dev Patel), the hotel is operating at full capacity, largely thanks to the assistance of resident-turned-co-manager Muriel Donnelly (Maggie Smith). In fact, the hotel has been so successful that the pair are looking to expand their operation by purchasing a nearby inn and refurbishing it into a second location. But first they must secure the necessary capital, flying to America to approach the owner of an American retirement company (David Strathairn) for an investment. To secure the deal, they'll first need to impress a hotel inspector who'll be sent incognito to evaluate their business. And no sooner have they returned from their trip than two new guests arrive simultaneously: dashing American Guy Chambers (Richard Gere) and Englishwoman Lavinia Beech (Tamsin Greig). But who might be the secret inspector?

We also catch up with the rest of the hotel's residents -- the film reunites the entire cast of the first film (minus those who portrayed characters who didn't make it to the end) -- finding that they've adapted quite well to their new surroundings, though they each find themselves facing the sort of minor conflicts that come with starting a new life chapter. Evelyn (Judi Dench) and Douglas (Bill Nighy) are still (far too tentatively) pursuing their second-chance romance; Norman (Ronald Pickup) and his girlfriend Carol (Diana Hardcastle) face questions of monogamy; and Madge (Celia Imrie) must make a decision when she's wooed by two eligible bachelors.

The first film didn't explore the culture of India with too much depth, instead using it simply as an exotic backdrop to its exploration of our anxieties about growing older. This time around, the Indian cast members get a bit more to do: Sonny angers his long-suffering girlfriend Sunaina (Tina Desai) when their wedding starts to take a backseat to his plans to expand the hotel, and the film even finds time for a plotline for Sonny's mother (touchingly played by Lillete Dubey, "The Lunchbox").

All that busyness seems at odds with a film ostensibly about life in a retirement community, though it certainly keeps things moving, even if most of the plot developments are telegraphed well in advance (possibly so as not to startle any audience member who might have heart conditions). Returning screenwriter Ol Parker does a decent job juggling all the threads, but as is often the case with films of this nature, some plots are more interesting than others and they aren't always the ones that get the most screentime.

Bright, colorful, and inoffensive -- there are no less than two Bollywood-style dance numbers! -- the chief pleasures of the film come from its cast of seasoned professionals (to understate it a bit), clearly having a great time together. Really, these performers could be acting out the phone book and it'd be worth the ticket price. As always, Maggie Smith proves an invaluable asset, delivering her patented withering stares and providing some poignancy to the film's overarching messages that it's never too late for a new beginning in life, and that sometimes knowing that the end is nearing can make the journey all the sweeter. Assured direction from John Madden ("Shakespeare in Love"), along with Ben Smithard's colorful cinematography and an effective score from Thomas Newman, add to the polished feel.

If you're buying a ticket to "The Second Best Exotic Marigold Hotel," you know precisely what you're signing on for, and in that regard the film delivers: it knows what it is and does it extremely well. Even recognizing that I'm well outside the target demographic, I enjoyed myself enough not to mind the extended visit.