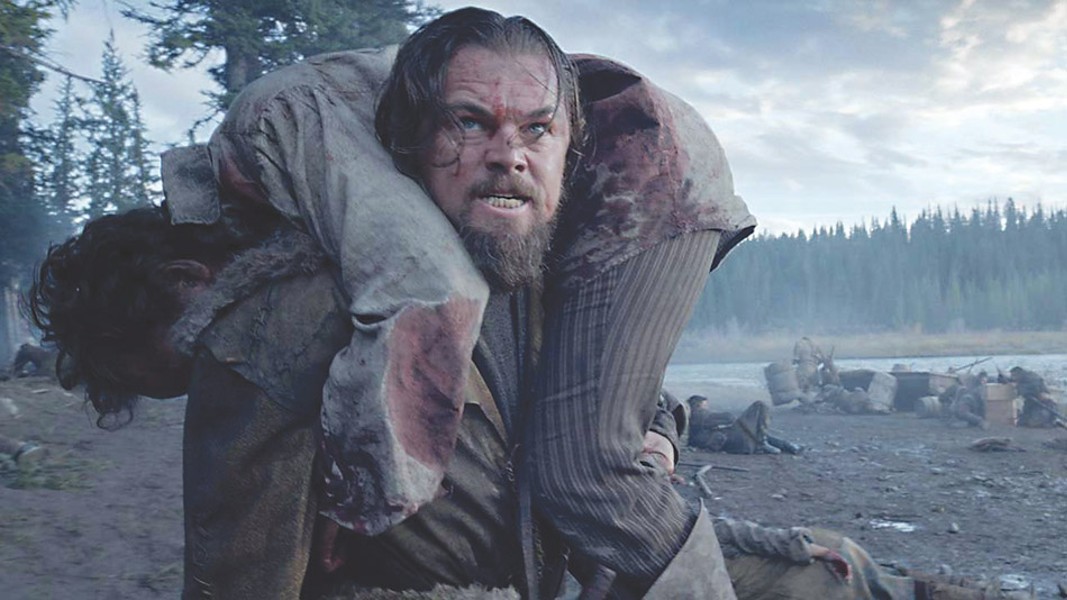 Leonardo DiCaprio in "The Revenant."

At last Sunday's Golden Globe ceremony, Alejandro González Iñárritu's macho survival tale, "The Revenant," took home awards for Best Picture, drama; Director; and Actor, drama. While it remains to be seen whether that will translate to Oscar gold (Academy Award nominations are announced Thursday), the Globes generally have a spotty record for predicting which way the Oscar winds will blow -- and these prizes seemed more a way to make up for not rewarding the director for "Birdman" last year. It's a dumb reason to award a film, made more so because while "The Revenant" is gorgeous to look at, it's absolutely miserable to watch.

"The Revenant" is inspired "in part" by the real-life story of fur trader Hugh Glass (a disheveled Leonardo DiCaprio), who survived being mauled by a bear and left for dead by the men he was hired to guide through the wilderness. After the attack, expedition leader Captain Andrew Henry (Domhnall Gleeson, having a hell of a year) decides that his men will split up. Most will forge ahead to Fort Kiowa, but John Fitzgerald (Tom Hardy, quite good in the latest in his series of marble-mouthed heavies) and a young man named Bridger (Will Poulter, giving one of the film's strongest performances) will stay behind with the gravely wounded Glass and his half-Native American son, Hawk (Forrest Goodluck). Concluding that being slowed down is too big of a risk, Fitzgerald instead murders Hawk and essentially buries Glass alive, leaving the now rather ticked-off man alone to crawl out of his grave and make his way 200 miles across the stark wilderness on his quest for vengeance.

There's much to admire in "The Revenant": it's astonishing to look at, with some stunning sequences captured by cinematographer Emmanuel Lubezki. Things start off strong with a startling raid on the expedition's camp by a tribe of Arikara, who we later learn were searching for the chief's kidnapped daughter (the only roles for women in this tale are as a ghost or a rape victim). And the bear attack is terrifyingly intense. Filmed entirely in natural light, there's a primordial beauty to the film's landscape that's incredibly striking. But while the scenes that take place in it are impeccably staged, they feel just that: staged. At one point in the film, a character exhales and the camera lens fogs up. It's a simple, but extremely strange moment since it seems entirely at odds with the gritty realism that Iñárritu is ostensibly after. It reminds us that what we're watching is only a film, and Iñárritu is right there behind the lens.

Over the past few months, the media has been filled with stories about how difficult this film was to make and the hardships its cast and crew had to suffer through for the sake of art. But art shouldn't be an endurance test. There's no questioning DiCaprio's commitment; no doubt he worked hard to get into the mindset of such a physical character, but we never burrow any deeper into Glass' character than his capabilities as a survivor. He's not helped by the fact that Glass personifies the well-worn cliché of the spiritual white man gifted with the abilities of the indigenous people who raised him.

If this is the role for which DiCaprio finally wins an Oscar, I fear it will be based less on the merits of this particular performance than out of that obnoxious sense that an actor is "due" for a win. He was infinitely more deserving for his nominated turns in "Django Unchained" and "The Wolf of Wall Street." We've all heard how the actor ate raw bison liver for a scene, though watching DiCaprio literally gagging down raw meat, I'm not the first to point out that when it happens, he's literally a foot away from a fire. Even a tough guy like Glass might have taken a minute to, you know, cook the damn thing first.

At a certain point, the amount of misfortunes inflicted on our hero tip into the comical; by the time he's being swept over a waterfall like the grimmest of Looney Toons characters, I had to laugh. Birth.Movies.Death. critic Devin Faraci described the film as "a prestige episode of Jackass," and that's pretty spot on. When the climax comes around, with two characters rolling around in the snow, grunting, stabbing, and biting off bits of each other, it all feels a little silly -- made all the more so by the fact that in real life, that confrontation never even happened.

The film makes occasional grasps at profundity, dabbling at becoming a meditation on the morality of revenge. During the opening attack, there's a shot -- beginning with a man getting killed, then following the native who kills him, then the man who kills the native, and so on -- which has more meaning behind it than the following two-and-a-half hours combined.

Iñárritu's previous film, "Birdman," took home Best Picture at last year's Oscars. At the time I couldn't help sensing that the film thought it was much cleverer than it actually was, and "The Revenant" provides no evidence to make me feel I misjudged it. I respect the technical craft and skill that went into creating this world, but the experience was empty, dissipating the second I left the theater. Maybe it's because Justin Kurzel's lovely "Macbeth" adaptation is still fresh in my mind, but as the credits rolled, what immediately popped into my head was the mad king's lament at being trapped in a tale "full of sound and fury, signifying nothing."