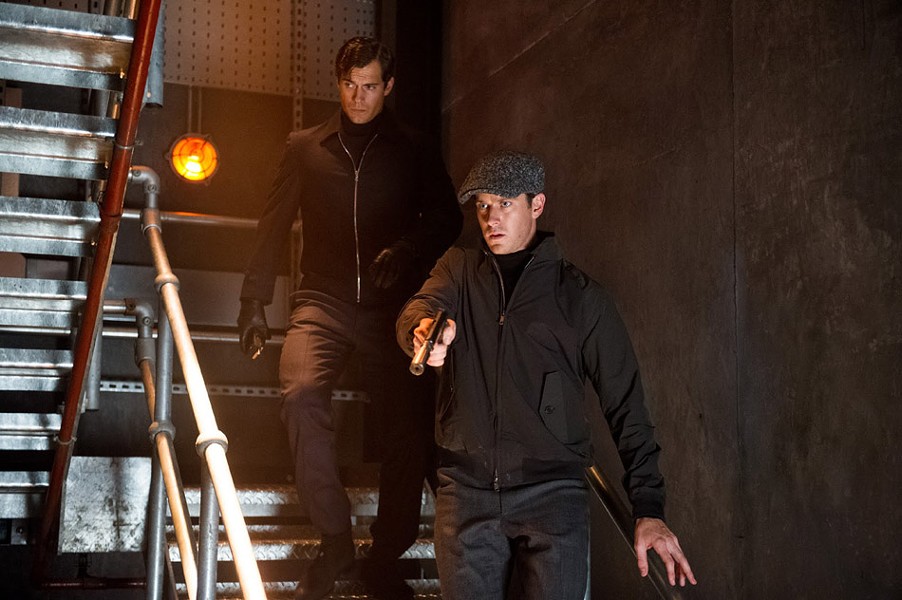 Henry Cavill and Armie Hammer in "The Man from U.N.C.L.E."

When filmmaker Guy Ritchie first hit the scene in the late 90's with his flashy cinematic calling card, "Lock, Stock & Two Smoking Barrels," he seemed like England's answer to Quentin Tarantino, though possibly just an amped-up knockoff. (Plus Ritchie presented us with Jason Statham, really a gift that keeps on giving.) But in the nearly two decades since, Ritchie has settled into a steady output of lucrative mediocrity. 2000's bloated "Snatch" proved he wasn't disciplined enough to be trusted with the keys to the kingdom, so after a couple more chatty shoot-'em-ups -- plus one punchline of a vanity project for his then-wife, Madonna -- Ritchie hit upon a foolproof formula of taking known pop-culture entities and sexing 'em up for the 21st century.

So in between his first two Sherlock Holmes movies and a Charlie Hunnam-led King Arthur flick due in 2016, Ritchie brings us "The Man from U.N.C.L.E.," a slick and unnecessary big-screen version of the mid-60's spy series. Set in the thick of the Cold War, the eternally blank-faced Henry Cavill ("Man of Steel") stars as Napoleon Solo, a debonair, Bond-esque American operative in East Germany with orders to detain Gaby Teller (Alicia Vikander), a sassy mechanic whose estranged father is a scientist building a nuclear weapon for a crime syndicate. But the Russians have designs on this technology as well, leading to a late-night car chase around Checkpoint Charlie, with humorless Russian agent Illya Kuryakin (the charismatic Armie Hammer, "The Lone Ranger") in ultimately futile pursuit.

And the next day, guess who gets paired up on the Gaby mission? The answer may surprise you.

Oh, of course it won't. "The Man from U.N.C.L.E." -- imagine if Ian Fleming wrote "The Odd Couple," except everyone is impossibly good-looking -- follows our barely cooperating heroes to Italy for more of an escalating game of Just Whip Them Out Already. The suave Solo ingratiates himself with the deliciously evil Victoria Vinciguerra (Australia's Elizabeth Debicki), while the hot-tempered Kuryakin and the adorably unpredictable Gaby try to pass themselves off as a couple. (The lanky Hammer and the comparatively pocket-sized Vikander have killer chemistry, in spite of -- or maybe it's because of -- their massive height difference.) Cue smug quips, lots of old-school action, romantic intrigue, twists, turns, and a soupçon of double-cross, and you got the opening salvo in a potential franchise.

The problem is it's all so chilly and detached, with neither the characters nor their highly edited situations evoking any emotional investment, making it difficult to care about the story. (And the suspense factor is pretty much nil, because even in the face of a sinking boat or the imminent blast of a nuclear warhead, the protagonists in big-budget action flicks are never truly in danger, are they?) Ritchie and co-writer Lionel Wigram refrain from updating the material, instead maintaining the TV show's Communist-era setting, but the Red Scare seems kind of quaint in retrospect, with threats like ISIS now on our plate. The chosen time period, however, does allow for some smashing set design, especially in Victoria's sexy office-slash-lair, as well as the ladies' luscious mod dresses and accessories.

It's worth confessing that I'm not a Henry Cavill fan; his dull delivery makes Eric Bana seem exciting. (Cavill actually replaced Tom Cruise, who dropped out to make the recent "Mission: Impossible" installment.) He gets the job done here -- he's convincing as a mischievous, womanizing spook with a lawbreaking past -- but Kuryakin is the more fascinating character, with daddy issues, a rage problem, feelings of inadequacy; he's a wreck. And Hammer is the more interesting actor, blessed with golden-god looks but surprisingly melancholy eyes that hint at heartache and struggle. And what else is there to say about the now-ubiquitous Vikander? (Seriously; do you have anything? I've written about her three times in less than four months.) She's an absolute pleasure to watch. 2015 is her year.

Here are two more words for you: Hugh Grant. More than 20 years out from the ascension of his own star, Grant seems to have settled into a sort of elder-statesman groove, his appearance here a mystery until it isn't, and age has done nothing to diminish his formidable charms.