Platformed carefully and hyped heavily, Wes Anderson's "The Grand Budapest Hotel," should achieve an impressive box office success. For unclear reasons, his movies usually please the reviewers enormously -- his first big production, "Rushmore," benefited from three major stories in the New York Times on its release, then received the sort of adoration from critics that devout believers usually reserve for the deity -- so this one should score in both the popular and the critical arenas. 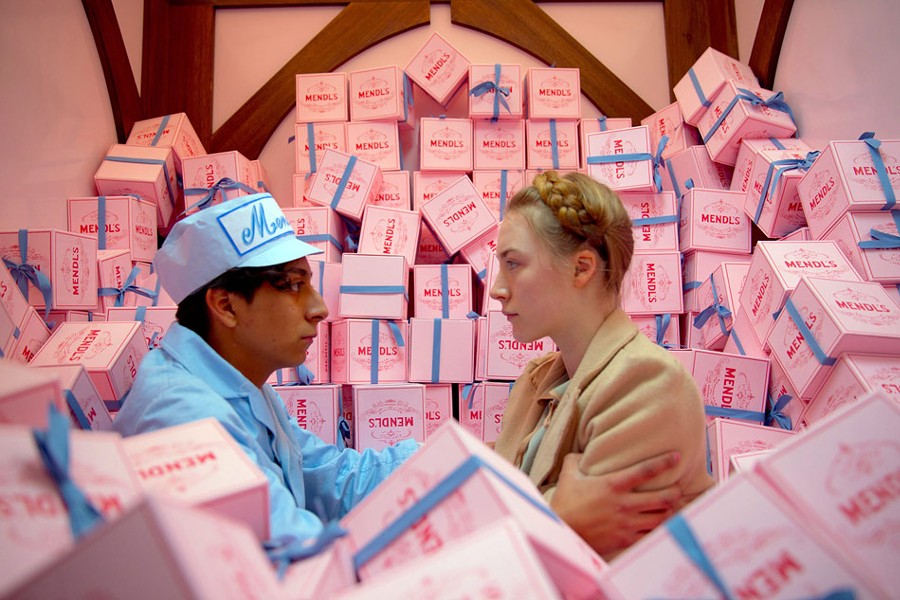 Based on some works by the Austrian writer Stefan Zweig, the movie operates within several frames, beginning with an honored novelist (Tom Wilkinson) explaining his theory of fiction to the camera, then moves to his voice-over reminiscence of an earlier time, when he stayed at the edifice of the title. There, as a young writer, now played by Jude Law, he meets the owner of the once-elegant place, an elderly man named Zero Moustafa (F. Murray Abraham). Moustafa then relates the story within the story, the history of his employment and adventures as a lobby boy in the 1930's at the Grand Budapest Hotel.

The central character of those adventures is Gustave H. (Ralph Fiennes), the hotel's charming, efficient, eccentric concierge, beloved by all his guests, especially the wealthy, aristocratic Madame D. (Tilda Swinton). He tells young Zero (Tony Revolori) that Madame D., though 84, is "dynamite in the sack," explaining, over a rapid montage of various sexual encounters, that he sleeps with most of the elderly guests.

The sudden death of Madame D. precipitates the movie's major plot, which involves her bequest to Gustave H., the anger of her vicious son Dmitri (Adrien Brody), Gustave's imprisonment and his various escapes with Zero from the police, Dmitri's murderous henchman Jopling (Willem Dafoe), and an invading army. Like the rest of the movie, the several pursuits, interrupted by comic dialogue, move at the breakneck speed of traditional cinematic farce, complete with sight gags, funny props, and outrageous characters, many of them played by big stars.

Those stars in the cast suggest that actors must like to work with Wes Anderson, no matter the size or importance of their parts. The movie features, sometimes in cameos, such well-known names as Jeff Goldblum, Edward Norton, Harvey Keitel, Bob Balaban, Bill Murray, and Owen Wilson, so that together with the many others in larger roles, "The Grand Budapest Hotel" appears to employ half of Hollywood.

Aside from the energetic pacing and the various farcical incidents, some right out of the Keystone Kops silent flicks, Ralph Fiennes carries the movie, managing to convey a good deal of charm and humor even in moments of pathos and some decidedly uncomical violence. His constant patter about the duties of a concierge and his staff and the obligations of service in a grand hotel makes an amusing counterpoint to the situations he faces, including his desperate escapes and his time in prison. As his loyal, devoted lobby boy, young Tony Revolori, projecting a sweet innocence, assists him ably, both as character and as performer.

The picture mixes its assorted elements in some unusual ways beyond its exaggerated farce. In addition to its humorous lines, actions, and situations, for example, it includes a number of quite surprising acts of brutality -- the fatal stabbing of four prison guards, an amputation, a strangulation in a confessional, and the beheading of an innocent young woman, hardly the normal stuff of comedy.

The sets create an appropriate background for the story's time and place, with the Victorian/baroque interiors of the Grand Budapest Hotel, the labyrinthine corridors and staircases of Madame D.'s castle, and the enormously complicated escape route of Gustave H. and his fellow prisoners. At the same time, most of the establishing shots and the exterior action scenes, whether intentionally or not, suggest a Disney cartoon, with flat, painted backgrounds, pastel colors, and buildings that look like cardboard cutouts. The picture looks good and maintains a persistent energy throughout, most of it the result of the character of Gustave H. and its fine sense of pacing; even for someone who is not at all a Wes Anderson fan, like the present writer, "The Grand Budapest Hotel" provides a more consistently entertaining experience than any of his previous pictures.