Russia in the Great Patriotic War

In light of the current tensions involving Russia and Ukraine, a movie about the Soviet defense of Stalingrad in 1942 provides some relevant instruction in some of the history of that nation and its attitudes toward the rest of Europe. Most viewers probably know little or nothing of the suffering the Russians endured in what they call, with some justification, the Great Patriotic War. They claim to have lost 27 million lives in World War II, more than all the other combatants combined, in the conflict that began when Hitler betrayed Stalin's cozy agreement in their non-aggression pact. 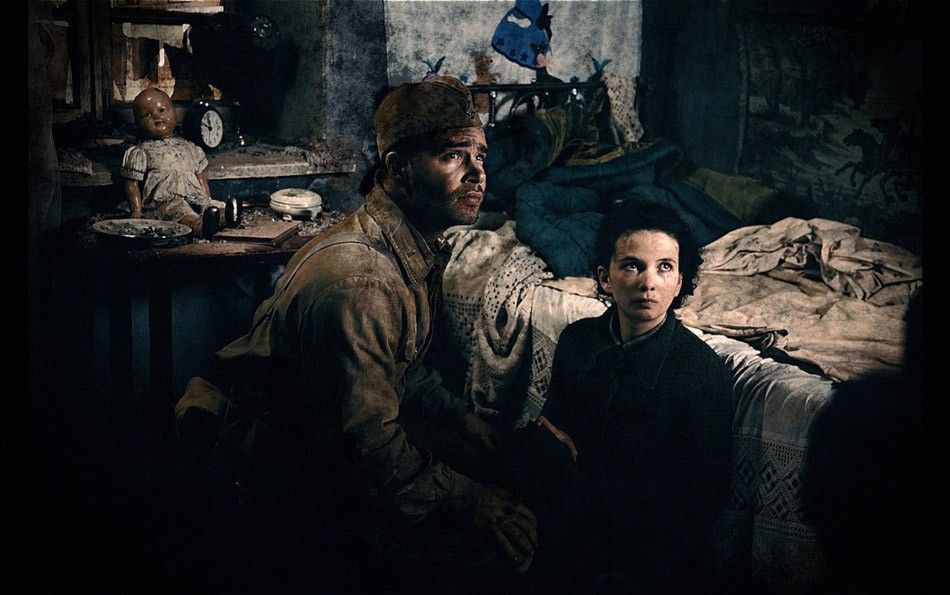 The greatest battle of that war, the subject of several books and movies, most memorably 2001's "Enemy at the Gates," was the protracted, vicious fight for the city of Stalingrad, a place of both strategic and symbolic importance. The German army had bombed the city to rubble, which caused the Soviets to evacuate most of the civilians, leaving in desperation a token, vulnerable population so that their forces would realize they were defending people, not simply ruins.

"Stalingrad" begins oddly, in Japan, showing the international rescue mission in the aftermath of the great tsunami and earthquake that struck the coast in 2011. A Russian physician speaks to a young German girl trapped in the rubble, soothing her with the tale of his mother's experience in the battle of Stalingrad. He tells her he had five fathers, the handful of military men trapped in a building protecting his mother Katya (MariyaSmolnikova), a 19-year old survivor, who, like all of the men, had lost her family to the war.

Once establishing that situation, the movie alternates between the Russian soldiers and the Wehrmacht unit opposing them, cutting back and forth between the two sides and their separate strategies. It also alternates between the two major male characters, the Russian KapitanGromov (PyotrFyodorov) and the German KapitanKan (Thomas Kretschmann). Like Gromov, Kan also tries to protect a woman, a Russian civilian named Masha (YaninaStudilina), thus nicely balancing personalities, motives, and actions.

The many battle sequences between the two groups display the ferocity of the attacks and the desperation of the defenders. Outgunned and outmanned, the Russians improvise a number of strategies to withstand the repeated German assaults. They salvage machine guns and ammunition from a wrecked Luftwaffe airplane, fire their one cannon shell so that it bounces off a disabled tank and hits the enemy headquarters, set an ambush hiding under the bodies of German soldiers, etc.

Aside from showing the gallant and pathetic efforts of the defenders to help and protect Katya, the director also focuses on the character of KapitanKan, distressed by the slaughter he conducts, sickened by his brutal colonel's deliberate murder of a Russian civilian and her child, and, despite his orders and training, in love with Masha. Threatened by his commander with execution if he cannot capture the Russians' building, he shares some of his enemies' desperation.

Like many war movies, "Stalingrad" mixes its human stories with numerous battle scenes, showing not only the usual gunfights, grenade explosions, and cannon fire, but also a good deal of hand-to-hand fighting, with knives, bayonets, and even clubs. KapitanKan remarks on the ferocity of the Russians, whom he considers barbarians and savages, noting that they don't want victory, but revenge, something he and his men cannot fully understand.

The picture's bloody violence against a background of rubble, filth, and damaged statues of Lenin, no doubt reflects the reality of one of the greatest and most important battles of World War II. Billed as the highest-grossing Russian film of all time, it probably appeals powerfully to the people of that nation, reminding them of a history they may have forgotten. After decades of Socialist Realism, when Soviet art concentrated on the class struggle, the corruption of capitalism, the evil of the bourgeoisie, and the nobility of the proletariat, replete with images of the happy Russian worker kissing his tractor, "Stalingrad" provides a healthy ambiguity about its subject: nobody fights for Comrade Stalin or the eventual dictatorship of the proletariat, but for themselves, for the city, and for Katya. Finally, like it or not, it shows that Russians express the same sentimental patriotism of so many Americans.