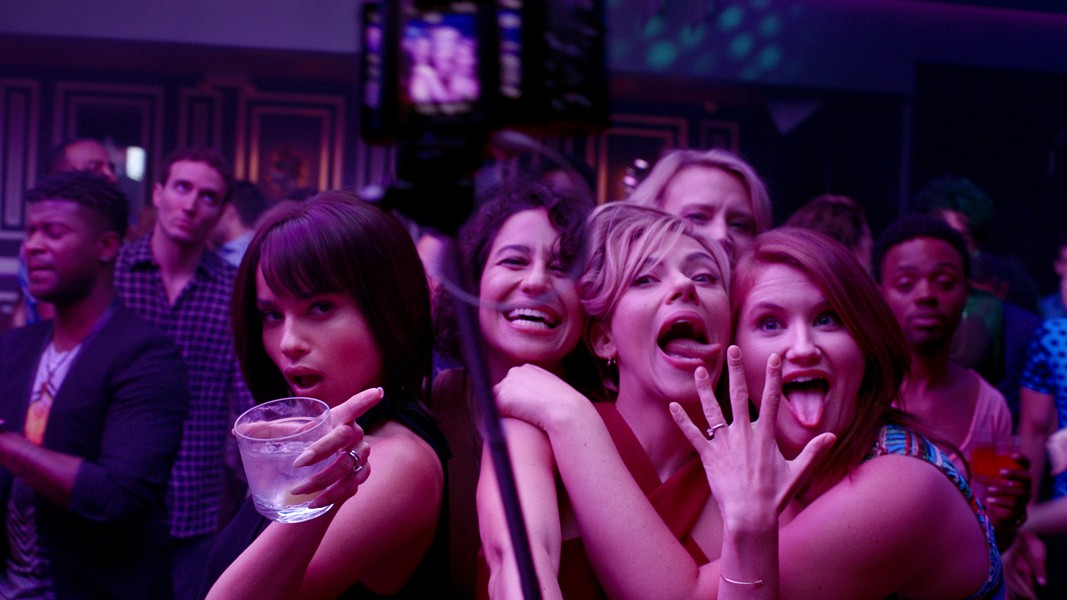 A bachelorette weekend descends into debauchery, drug-fueled benders, and some inadvertent manslaughter in "Rough Night," a gleefully R-rated comedy that marks the feature debut of "Broad City's" Lucia Aniello. The rarity of raunchy, R-rated comedies helmed by female directors is reason enough to root for the film, but while there's plenty of laughs to be had, the script too often feels frustratingly derivative.

Jess (Scarlett Johansson), the bride-to-be, is taking a break from her state senate campaign to dutifully attend her bachelorette weekend in Miami Beach. There's a certain sense of obligation as her overbearing freshman roommate, Alice (Jillian Bell), has planned the event as an excuse to reunite their core group of college friends, which includes rich Manhattanite Blair (Zoë Kravitz) and hippie-ish activist Frankie (Ilana Glazer).

The women have stayed in touch, but as life has taken them in different directions, it's been years since they've actually seen each other. The late arrival of Pippa (Kate McKinnon, seemingly channeling her "Ghostbusters" co-star Chris Hemsworth), Jess's friend from her time studying abroad in Australia, only adds to the somewhat strained atmosphere. But heavy amounts of alcohol and a bit of cocaine eventually loosens everyone up for a good time. Until, that is, an unfortunate accident leaves them with a hunky but very dead stripper (Ryan Cooper) on their hands.

Directed by Aniello from her script with partner Paul W. Downs (who also has a role as Jess's fiancé), "Rough Night" sets out to prove that women can be just as debaucherous and immoral as men (though really, if you don't know that by now, you clearly aren't hanging with the right circle of friends). The film is reminiscent of everything from "The Hangover" and "Very Bad Things" to "Bridesmaids" and even "Weekend at Bernie's." And "derivative" is just about the dirtiest word you can hurl at a raucous comedy like this.

Comedies that involve murder -- accidental or otherwise -- already have a tricky line to walk, and in something like "Very Bad Things," part of the joke was how, beneath their thin veneer of propriety, its characters were truly terrible people. There, the tone crossed too far into mean-spiritedness, but that also gave its filmmakers the freedom to do whatever they wanted. Aniello, on the other hand, feels obligated to make sure the women in her film are completely redeemed by the time the credits roll.

In attempting to make sure we know these characters are all decent people at heart, the script shifts the focus to the rejuvenation of their friendship. The actors deliver, but since everyone is only assigned a single personality trait (two at most), the characters aren't developed enough for us to become that invested in those relationships. Although the former romance between Blair and Frankie is one of the few bits of character detail that adds something fresh to the group dynamic.

Individual scenes in "Rough Night" are hilarious, but the narrative lacks the sense of escalation that's crucial for this type of farce. With the caliber of talent that's in front of and behind the camera, "Rough Night" should have made for a bender worth remembering.

Check back on Friday for additional film coverage, including a review of "The Exception."