Director Paul W.S. Anderson has made a career out of making capably directed, but critically reviled, effects-driven B-movies. He's responsible for the entire series of "Resident Evil" films (and just signed a deal to direct the sixth, and supposedly final, installment) as well as "Event Horizon" and "Mortal Kombat," both films with devoted cult followings. He's a director who has never been given much respect -- and he's not done any favors by sharing a name with one of the most acclaimed of all modern filmmakers, Paul Thomas Anderson, director of genuinely great films like "Boogie Nights" and "There Will Be Blood." 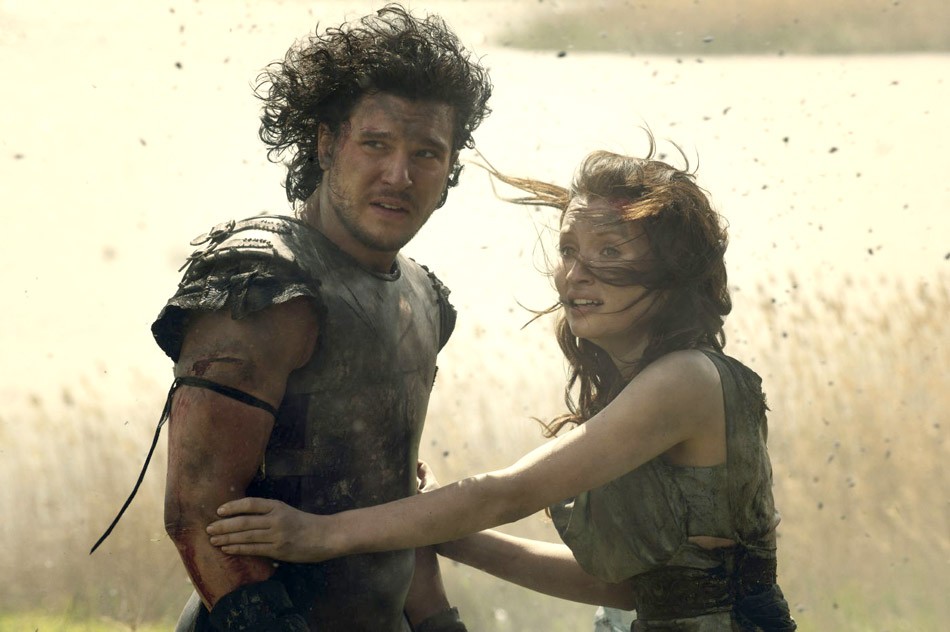 Paul W.S. Anderson's latest, "Pompeii," marries star-crossed romance with a sword-and-sandals epic, and gooses it with a heaping helping of disaster-flick carnage. If that isn't a recipe for a delicious popcorn entertainment, I don't know what is. Tragically, what results is a misguided film cobbled together from so many bits and pieces of other, better, films that it could easily have been titled "I, Frankenstein."

The poster for "Pompeii," which features leads Kit Harington and Emily Browning snogging against a backdrop of fiery destruction, had given me hope. With an advertising campaign built around such a ludicrous image, I'd hoped for at least a hint of the sort of campy sense of humor that might have made the ridiculous material bearable. Alas, Anderson chose to play the story with deadly seriousness.

The film tells the story of a Celt horseman named Milo (played as a child by Dylan Schombing and as an adult by Harington), who as a small boy watched as his people were slaughtered by Roman soldiers. Sold into slavery and forced to become a fighter, Milo is eventually brought to the Roman city of Pompeii to become a gladiator. While on the road to Pompeii, Milo's chain gang runs into the entourage of beautiful young aristocrat, Cassia (Browning, "Sucker Punch"), who is returning to the city after a year living in Rome. Cassia's horse is ailing, and Milo steps forward to assist by snapping the animal's neck in order to put it out of its misery. It's a foolproof way to win over a lady, and not surprisingly, Cassia is instantly smitten.

Back in Pompeii, Cassia's governor father is attempting to broker a real-estate deal to make the city a popular destination for the elite of Rome. He meets with the odious Senator Corvus (Kiefer Sutherland, snarling and gnashing his teeth in a performance that gives scenery chewing a bad name) to secure investment capital, but having unsuccessfully pursued Cassia in Rome, Corvus uses his leverage to force her father to promise him her hand in marriage. And, wouldn't you know it? Corvus is the very fiend who led the Romans in massacring Milo's family all those years ago. Meanwhile, Milo is told he will fight against Atticus (AdewaleAkinnuoye-Agbaje), the reigning champion gladiator, who has only one more fight until he earns his freedom. Naturally, the promise of imminent bloodshed makes the two men into the best of friends. It's around this point in the story when everyone learns why it was a bad idea to build a city at the foot of an active volcano.

"Pompeii" is a film with no shortage of problems. Foremost is the film's screenplay (written by husband-and-wife team Janet and Lee Batchler, with Michael Robert Johnson), which borrows heavily from crowd-pleasing epics "Gladiator" and "Titanic." The lack of originality in the story wouldn't necessarily spell disaster, but when you add in cringe-inducing dialogue and bland lead performances, things become dire fairly quickly. Harington is fine, but he's mostly playing the same notes he hits in his role as the mopey Jon Snow on "Game of Thrones," while Browning makes for a rather dull love interest. Akinnuoye-Agbaje comes off best, investing his stock character with some hints of life.

The special effects are inconsistent, though thankfully the majority of the effects budget was saved for the inevitable eruption sequence, which is impressively rendered. I didn't see the film in 3D, so the frequent shots of smoke and ash rushing toward the camera likely lost some of their intended impact. Anderson's gladiatorial combat sequences are muddily staged and choppily edited, though that has become an increasingly common trait amongst the current wave of action films. I will say they were surprisingly bloody for a PG-13 film, which I suppose is a plus.

Anderson's direction is occasionally quite skillful. His camera often takes a bird's-eye view on the action, making the geography of the city exceedingly clear, which is helpful once chaos descends and the characters are fighting to find a path out of the city. It's a simple thing, but something that far more skilled directors often neglect. Less successful is his decision to constantly end early scenes with the camera tilting up toward the increasingly angry-looking volcano. It's clearly intended to generate tension and a feeling of impending doom, but it only reinforces the idea that all the time spent with these paper-thin characters is just the film killing time until the real action begins.