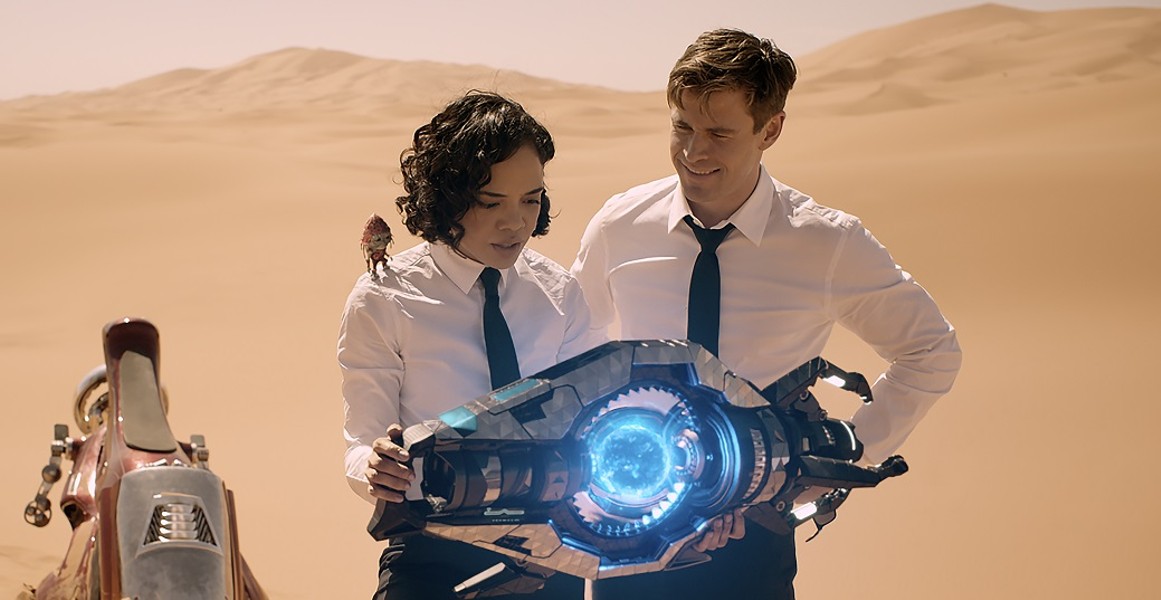 It's a wildly entertaining read, and one that turns out to be instructive in pinpointing exactly what's changed in blockbuster filmmaking over the 22 years since that film was released. What's most surprising is learning how much freedom D'Onofrio was given to play and experiment with the role, working with his director and the special effects artist to create an indelible, fully-realized character. And that work paid off with one of the best and most underrated performances of the 90's.

A comparison between the picture painted in that article -- of the value placed on the creative process when making the first MIB film -- and the one suggested by its just-released third sequel, "Men in Black: International" is disheartening to say the least.

Reuniting "Thor: Ragnarok" co-stars Tessa Thompson and Chris Hemsworth should have been a home run, but "Men in Black: International" whiffs it by refusing to take any chances whatsoever. Gone is the imagination and wit that made the original such a success; in its place is a lifeless and unforgivably generic piece of studio content.

By this point in the franchise, the film assumes its audience is already familiar with the Men in Black organization, a secret force of black-suited and sunglasses-sporting heroes who save the world from extra-terrestrial threats. Much like the first film, the plot pairs an eager new recruit paired with a more seasoned veteran.

We meet Molly (Thompson), whose close encounter as a child left her obsessed with tracking down the secretive organization. It takes 20 years, but she finally succeeds, sneaking herself into the MIB headquarters. She's found out, of course, and in one of the film's more delightful scenes convinces Emma Thompson's Agent O to give her a shot at the job.

Impressed by her initiative, O makes her a probationary agent and sends her from New York to the London office, presided over by High T (Liam Neeson). There Molly (now Agent M) is partnered with the cocky H (Hemsworth) to dig into a mysterious threat known as The Hive, an investigation that soon suggests the MIB have a mole in the organization (which culminates with the least surprising mole reveal possible).

The new film does forge a slightly new path by being more of a full-bore spy movie than its predecessors. But director F. Gary Gray and his screenwriters, Art Marcum and Matt Holloway, make the mistake of piling on incident and plot to the detriment of all else. For all its zany aliens and goofy action, what made the first "Men in Black" work was the odd-couple, buddy comedy energy between stars Will Smith and Tommy Lee Jones.

The contrast between M and H's personalities isn't sharp enough to generate any fun friction.

M's character is also frustratingly static throughout the film. It also might have been nice to spend more time with her in her youth, learning how she gained so much knowledge of a subject that was deliberately hidden from her. Meanwhile H's arc hinges on how he's changed from the beginning of his career, but since we don't have the benefit from seeing that change ourselves, it's hard to be too invested.

It seems as though the filmmakers assumed they could coast by on the charms of their cast, but they're hampered by a weak script. Most of the film's laughs are more a result of the actors' (or in the case of its aliens, the computer animators') expressions and delivery than the actual words they're saying. The film does liven up considerably when the pair meet up with Pawny, an adorable and hilarious pint-size alien voiced by Kumail Nanjiani.

Without a compelling plot or fully-realized characters to play, there's little to latch onto. The result is a script with such a severe lack of imagination that even some impressive production design and Danny Elfman's fun 90's-tinged score can't spice it up. I also couldn't help but miss Rick Baker's practical effects, which gave the original film such a pleasingly tactile feel. The new CGI effects are fine, but the characters they create have little weight to them, physically or emotionally.

"Men in Black: International" opened on June 15, and over the weekend became the latest in a string of summer sequel box office disappointments. Audiences stayed away in droves, but the lack of interest can't even be attributed to sequel oversaturation: audiences have shown time and again that they'll show up for sequels, just not any sequel that the studios throw at us.

The problem is a general laziness from studios who are content to repackage recognizable properties without putting in the work to make them feel fresh. In the end, the new film fails because it sticks to the tried and true, and never takes enough chances to distinguish itself or justify its existence. Especially in a film about exploring the mysteries of the universe, you've got to show us something new.