Film review: "Manchester by the Sea" 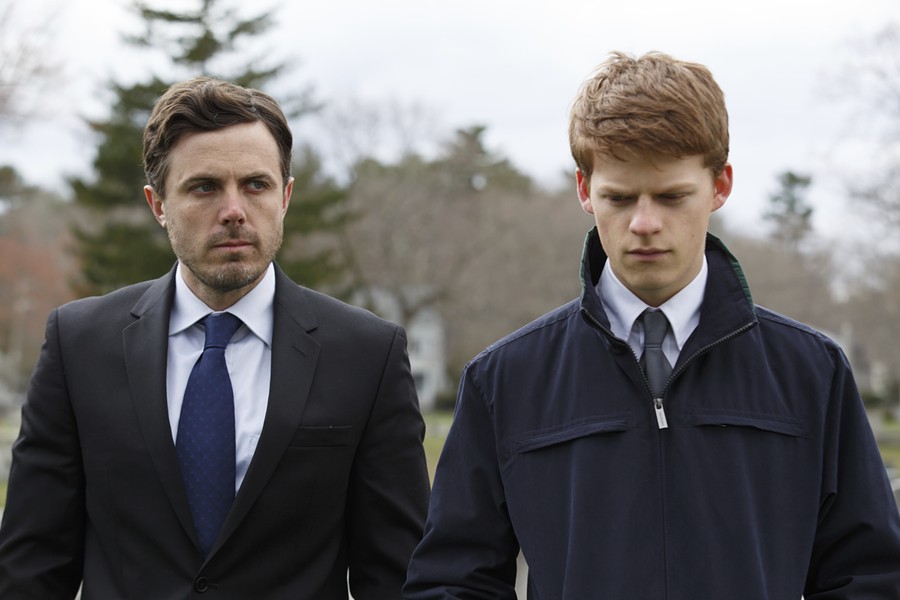 Casey Affleck and Lucas Hedges in "Manchester by the Sea."

"Manchester by the Sea"

Currently favored to snag a Best Picture nod once Academy Awards nominations are announced next month, "Manchester by the Sea" is a heartbreaking exploration of grief and loss among characters who've lost the tools to process them. Writer-director Kenneth Lonergan is fascinated by stories about broken people bumbling their way toward piecing themselves back together, and it's a theme he's previously explored to great effect in films like "You Can Count on Me" and "Margaret" as well as in several Broadway plays. It's a dark and mournful tale, but also a good deal funnier than you might expect

"Manchester" opens with a joyful scene of Lee Chandler (Casey Affleck) fishing with his older brother, Joe (Kyle Chandler), and Joe's young son, Patrick. Lee is lively and boisterous, good-naturedly teasing and joking with his nephew in that way that uncles are required; it's obvious that there's a real bond and affection there.

But when we jump ahead several years, we find Lee a remarkably colder man. He's working as a handyman in Boston and living in the basement apartment of one of several buildings he tends to. Lee seems to have disengaged from life, spending his days working and his nights drinking and picking fights in bars.

Then Lee gets the news that Joe has died of a congenital heart defect. Rushing back to Manchester-by-the-Sea -- and the home he'd left behind -- Lee's forced to deal with the figures he'd hoped to leave in the past, including his ex-wife (Michelle Williams) and his now teenaged nephew (newcomer Lucas Hedges in a star-making turn).

His brother's will names Lee as Patrick's guardian, and suddenly he faces a world of responsibility -- one he feels ill-equipped to handle. Lee's relationship with Patrick has been neglected over the years, but they're connected by blood and have no choice but to punt their way through it.

On the surface, "Manchester by the Sea" is another in a long line of films about damaged men journeying back home to confront the demons of their past, but the honesty and sensitivity with which the film treats its characters distinguishes it from the rest. As the film goes on, flashbacks fill in the gaps in Lee's path toward becoming the man he is. Lonergan digs into the ways we each deal with trauma in our lives, and how sometimes there are mistakes in our past that we can't forgive ourselves for.

It all sounds heavy -- and it definitely is -- but Lonergan spikes the mood with a dark, rueful sense of humor that's often laugh-out-loud funny. Despite the undeniably tragic nature of the story, Lonergan never wallows in the misery. His observant script is written with intelligence as well as a deep sense of compassion and affection for its characters. He cares about them, and we come to do the same.

Since the film premiered at Sundance back in January, Affleck's performance has earned him raves (he recently took home awards for Best Actor from the National Board of Review and New York Film Critics Circle). He's an Oscar frontrunner, but one whose past actions are once again forcing audiences to consider whether they can separate art from the artist. Still the actor delivers a tremendously moving performance as a man who's damaged, possibly beyond repair. He's attuned to the ways that grief can leave us numb to the world around us, and Lee is a man who long ago decided that he doesn't deserve a chance at happiness.

At the heart of the film is the relationship between Lee and Patrick. They're two men who aren't adept at putting their feelings into words, but Affleck and Hedges share a prickly familial chemistry in their scenes together. Hedges is wonderful as Patrick works to maintain his normal life -- playing hockey, practicing with his band, and juggling two girlfriends -- while also dealing with the strange and alien process of grieving for his father. Michelle Williams is phenomenal in only a few short scenes. Her last scene with Affleck is harrowing in terms of sheer emotional intensity.

As a director, Lonergan's visual style is relatively simplistic, although here it suits the material. Jody Lee Lipes' gloomy, gray cinematography captures the somber mood in every frame, but the wonderful work by editor Jennifer Lame might be the most striking. Jumping back and forth in time, her work never calls attention to itself as it adds an unexpected zip and drive to the narrative. The effect works spectacularly well, particularly during the sequence in which a crucial event of Lee's backstory finally snaps into place.

Films dealing with death can be unrelentingly bleak and a drag to sit through, but in Lonergan's nimble hands, "Manchester by the Sea" is devastating, funny, and always vividly alive.

Check back on Friday for additional film coverage, including a review of "Miss Sloane."