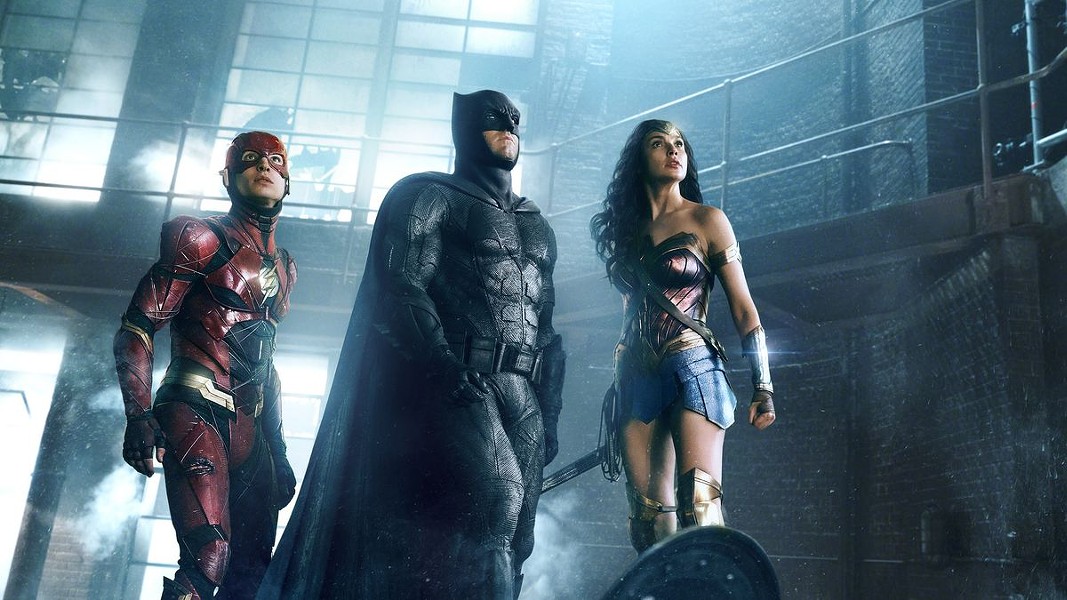 Meant to be the culmination of DC's film universe so far, "Justice League" has had a bumpy journey to the screen. A personal tragedy forced director Zack Snyder to step away from the film in its final stages, leading to Joss Whedon being brought in to usher the film across the finish line. Whedon ended up making enough changes to earn a co-writing credit, and the finished film does feel like the product of two, sometimes competing, artistic visions.

Split between the two filmmakers' sensibilities, "Justice League" continues the course-correction that started with "Wonder Woman," and Whedon's quippy humor counteracts Snyder's dour, more self-serious tendencies. Still, considering the behind-the-scenes shakeups, it's a minor miracle the film is even half as coherent as it is.

The film opens with Superman dead, and we get a gloomy montage showing the world in mourning -- that's despite the fact that based on the previous films, humanity seemed to hate Superman when he was around. I guess it's a case of not knowing what you've got until it's gone.

With Superman out of the picture, Batman (Ben Affleck) brings together Wonder Woman (Gal Gadot), the Flash (Ezra Miller), Cyborg (Ray Fisher), and Aquaman (Jason Momoa) to form a "special fight team" meant to protect the planet from threats too big for the heroes to handle individually. I'm not entirely clear on how Batman made these personnel decisions: We know he learned of the other heroes through Lex Luthor's secret files in "Batman v Superman," but this film establishes that he's not entirely sure what powers several of the new members have (or in Cyborg's case, if he's even still alive), so it's a little unclear what makes him so trusting of Luthor's intel.

A new threat does indeed arise in the form of Steppenwolf (Ciarán Hinds), an evil, all-powerful being on a mission to locate and bring together the Infinity -- err, sorry, the Mother Stones. These boxes of mystical energy will imbue him with the ability to transform the world into his own personal hellscape. The problem is that as a villain, Steppenwolf never feels like much of a threat. Even with his army of bug-like Parademons, he's mostly silly looking, a CGI monstrosity straight out of a video game cutscene. Any sort of performance Hinds might have been giving on set gets lost in the transition to the screen.

Much has already been said about the way DC has handled the creation of their onscreen universe. Jumping so quickly into the big team-up film feels a bit slapdash, and the story suffers by being forced to introduce us to three of the five members of the team. It's typical of DC's films to have ambitions that frequently exceed their grasp. In previous cases, those ambitions at least made things interesting (if not entirely satisfying), but here the storytelling is a bit more conventional.

I can't know for sure what was altered when the film changed directing hands, but the aspects I enjoyed the most were ones that felt like Whedon's touches. The film still contains the same old DC problems -- murky CGI, massive plot holes, and bafflingly ugly production design -- but there are some nice character moments, and the film is at its best when the team is together as a group.

Gadot is still wonderful, imbuing Wonder Woman with all the power and goodness that the character requires. The Flash ends up providing much of the film's comic relief, and Miller's likeable enthusiasm makes him the film's MVP. Affleck's Batman was one of the things I liked about "Batman v Superman," but now he's locked into playing that particular characterization ("brooding" isn't the half of it) and the few jokes he has here feel odd coming out of his mouth.

As Cyborg, Fisher has the most hurdles to overcome, being both a new character and saddled with a hideous character design. That he manages to make a decent impression is a testament to his skill as a performer. Momoa can swagger with the best of them -- but while I understand his appeal (I mean, look at him), I don't find him a terribly charismatic screen presence.

Now I'll take a moment to talk about certain plot elements that may or may not be a surprise to you. If you're worried about spoilers, I recommend skipping the next paragraph to be safe.

Superman (Henry Cavill) rises again. This is the first Snyder film that feels like it gets Superman even remotely right as a character, and the scenes of Lois (Amy Adams) and Clark reuniting at the Kent farm are pretty great. I'd also be remiss if I didn't mention the infamous MustacheGate, in which Cavill's "Mission: Impossible 6" mandated 'stache created havoc for reshoots, necessitating its digital removal in every new scene he appeared in. The alterations are noticeable, but only if you're really looking.

As a film, "Justice League" is just fine. It's better than "Batman v Superman," but not nearly as good as "Wonder Woman" (and it's certainly not as godawful as "Suicide Squad"). Even if it does feel a bit like several movies cobbled together, it manages to show a few faint glimmers of a franchise I might even be interested to see continue.