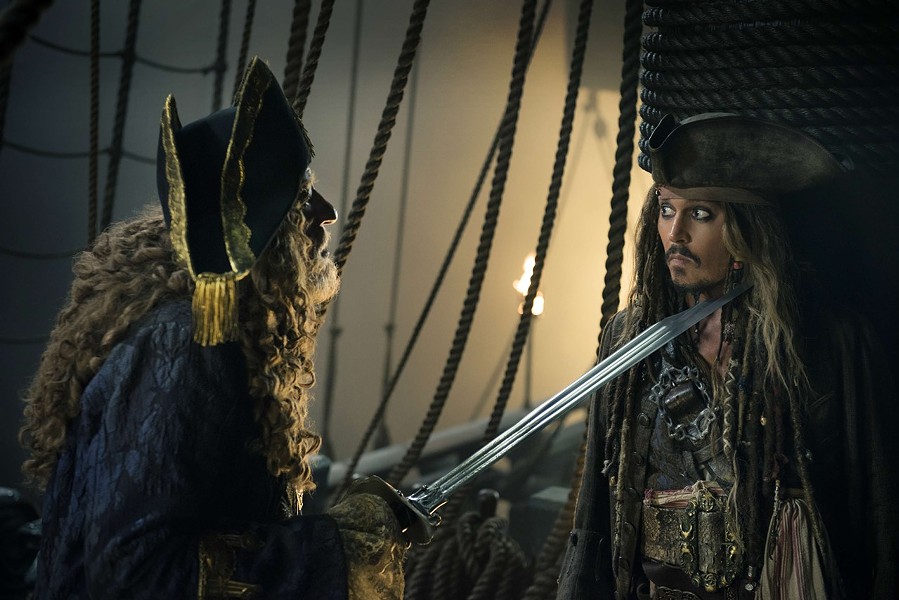 Geoffrey Rush and Johnny Depp in "Pirates of the Caribbean: Dead Men Tell No Tales."

"Pirates of the Caribbean: Dead Men Tell No Tales"

When the original "Pirates of the Caribbean" movie came out in 2003, no one had high expectations for a summer blockbuster inspired by a theme park ride and tied to a genre (the seafaring adventure) that had long since fallen out of favor with audiences. But thanks to the deft hand of director Gore Verbinski, Johnny Depp's instantly iconic performance, and one hell of a catchy orchestral theme, the movie became a runaway hit, and gave birth to one of Disney's more popular franchises.

Oh, what a difference 14 years can make.

Every subsequent chapter has offered diminishing returns, leading up to the utterly forgettable "On Stranger Tides" (the first "Pirates" movie without Verbinski at the helm) in 2011. The fifth film in the series, "Pirates of the Caribbean: Dead Men Tell No Tales," charts the same familiar course as those past installments: supernatural curses, double crosses, and a hint of love story, with a bit of swashbuckling and sea battles in between.

The new film's plot revolves around the search for the Trident of Poseidon, a mystical doo-hickey that allows those who wield it to lift any and all seabound curses. And if you've seen even one "Pirates of the Caribbean" movie, you can probably guess how enticing that power might be to any of the franchise's increasingly unwieldy number of characters.

One of those characters happens to be Henry Turner (Brenton Thwaites), son of Will Turner (Orlando Bloom) and Elizabeth Swann (Keira Knightley). With Will still cursed to captain the Flying Dutchman for all eternity, Henry enlists the help of Captain Jack Sparrow (Johnny Depp, of course) to help him find the Trident and save his father. Along the way, they add to their party Carina (Kaya Scodelario), an orphaned astronomer who may hold the key to the Trident's whereabouts. As per franchise requirements, we also get another band of villainous undead sailors, this time lead by the vengeful Captain Salazar (a hammy Javier Bardem), whose fate is tied to a run-in with Captain Jack many years prior.

And because the series' characters are harder to get rid of than barnacles on the underside of a ship, Captain Jack's old foe, Captain Barbossa, has to get involved (at least Geoffrey Rush still appears to be having some semblance of a good time with the role). Add in zombie sharks, plus a witch -- who serves no purpose other than to make viewers wonder why characters spend so much time accusing Carina of witchcraft when there's, you know, an actual witch running around -- and it's a lot to add to the already bloated, convoluted mythology of the franchise. Despite being the shortest film in the series, "Dead Men Tell No Tales" still manages to feel padded out.

Thwaites and Scodelario are a moderate improvement over the star-crossed mermaid and missionary protagonists from the last film, but they still make for pretty bland leads. It doesn't help that neither gets a whole lot to do. Five movies in, and even the series' most beloved character, Captain Jack, is but a shadow of his former self. Depp's portrayal has only grown bigger, broader, and more cartoonish with every film; watching him coast on relentless mugging and silly pratfalls, it's a bit of a shock to remember that the actor was Oscar-nominated for his work in the original.

This all makes for mostly unmemorable viewing, though there are a few fun visual touches: Salazar's ghostly ship rearing up like a centipede as it attacks, a spinning guillotine, and the sight of the Black Pearl coasting along the side of a cavernous ocean trench. An early bank-heist scene is fairly entertaining, even if it seems to be a pre-Industrial Age riff on a similar sequence from "Fast Five."

Norwegian directors Joachim Rønning and Espen Sandberg were able to lend a thrilling verisimilitude to their high-seas adventure, "Kon-Tiki," but here they're unable to conjure up the charm and imagination this franchise can provide. "Dead Men" is overloaded with uninspired CGI, most of which follow the unfortunate recent trend of gloomy-looking digital effects -- you know you're in trouble when even a sequence set around a tropical coral reef is rendered in the same dull blue-gray tones as almost every other blockbuster these days. And because Disney technicians have gotten pretty good at it, we have to get a flashback sequence featuring a digitally de-aged Depp.

"Dead Men Tell No Tales" ends with a dutiful promise of another installment, and after two hours of somnambulant performances, leaden effects, and slapdash storytelling, it's hard to tell who seems less excited by that prospect: the audience or the filmmakers.

Check back on Friday for additional film coverage, including reviews of "The Wedding Plan" and DC Comics' "Wonder Woman."