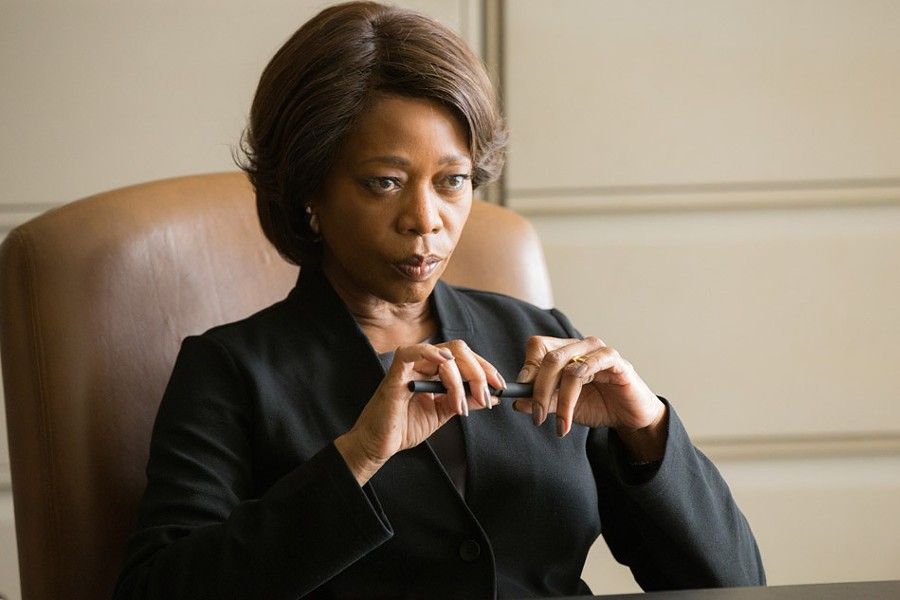 Now playing at the Cinema Theater

Alfre Woodard gives a phenomenal performance as a prison warden grappling with the emotional and psychological toll of carrying out death row executions in Chinonye Chukwu's sobering and provocative drama "Clemency."

Woodard plays warden Bernadine Williams as a woman who lives for her work. She prides herself on carrying out difficult responsibilities with professionalism and care, working to ensure that all the inmates under her watch are treated with dignity while never letting her own feelings get in the way of her duties.

As the film begins Bernadine is overseeing her 12th execution, the lethal injection of a prisoner (Alex Castillo) which goes dramatically, horribly wrong. It's a harrowing scene, and the experience leaves her deeply shaken.

That incident is followed shortly by the arrival of a new inmate, Anthony Woods (a heartbreaking Aldis Hodge). Bernadine's is a job that requires a certain stoicism, but as preparations begin for Anthony's execution, cracks begin to appear in Bernadine's facade. Over the course of the film those cracks become increasingly difficult for her to hide.

The cumulative weight of her job is one she can't help but take home with her, and we see the ways it's affected nearly every aspect of her life. Bernadine suffers from insomnia, and nightmares jolt her awake on the rare nights when sleep does finally come. It affects her marriage, and her schoolteacher husband (Wendell Pierce) attempts to communicate his fears about the distance he feels growing between them.

Playing a young man sentenced to die for a murder he may not have committed, Hodge is the film's beating heart. We see him though meetings with his dedicated lawyer (Richard Schiff) and a heartbreaking interaction with an estranged girlfriend (Danielle Brooks), all the while desperately trying to hold onto his humanity in the face of a system that seeks to snuff out his life.

With her second feature, Nigerian-American filmmaker Chinonye Chukwu tells a story that forces its audience to consider the human cost of living and working on death row, never losing sight of the humanity of those on either side of the prison walls. The film explores our broken justice system, and thoughtfully exploring of a hot-button issue, Chukwu asks her audience to consider the real cost of extinguishing a human life.

Chukwu directs with confidence, unafraid to punctuate her film with long, empty silences. She has enough faith in her lead actress to know she can just hold on Woodard's face, and it will tell us everything we need to know. Woodard gives one of the very finest performances of the year.

"Clemency" won the Grand Jury Prize at last year's Sundance (making Chukwu the first black woman ever to win the award), setting up an expectation that the film would be a major player once award season finally rolled around. But somewhere along the line, it fell off the radar of most awards-giving bodies. Which is not to say that such awards are the be-all, end-all bellwether of distinguishing quality art. But it would be a shame if, in the rush of attention given the Oscar-nominees, audiences missed out on this gripping and deeply empathetic film.