The power of the dollar 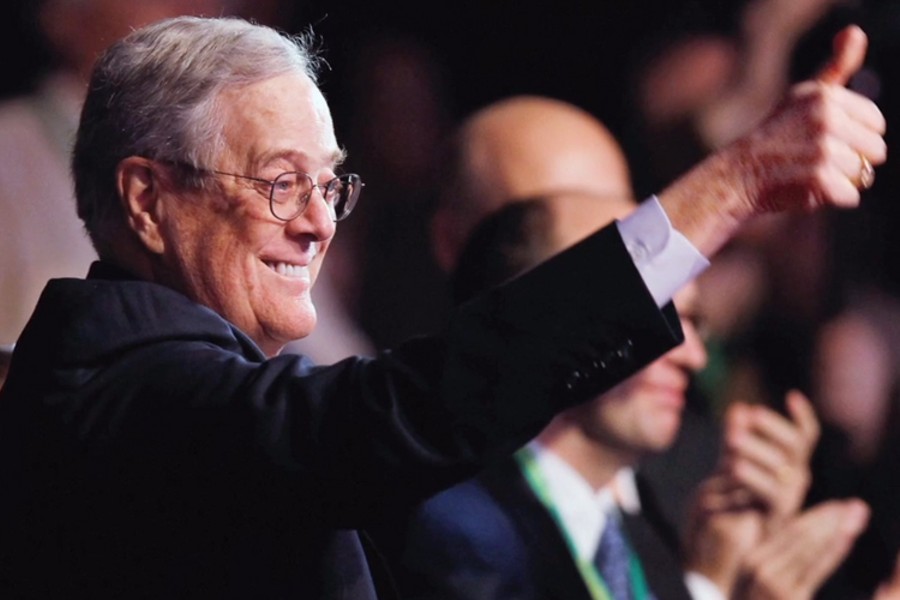 NOW PLAYING AT THE LITTLE

Recalling the days of the Great Depression, when social and economic conditions inspired a number of gifted photographers and filmmakers to document the American experience, in our time the nonfiction film appears to be undergoing something of a renaissance.

The contemporary documentary often confronts subjects ignored by the bland and timid mainstream media -- revelations about the dangers of fracking, Michael Moore's films, "The Tillman Story," even the docudrama "Fair Game." A common theme unites these works, a sense of outrage in reaction to the abuses of some powerful and corrupt entity.

That outrage lies behind the new film, "Citizen Koch," an examination of the influence of the billionaire Koch brothers on state and federal elections. It begins with a quotation from their father, a founder of the John Birch Society, asserting that "the colored man" represents the threat of Communism in the United States, and proceeds throughout its length to show, almost casually, the extent of the racism that now sweeps the country, most of it energized by the virulent rhetoric of right wing politics. Sarah Palin spews hatred before a crowd of Tea Party followers waving Confederate flags and posters of Barack Obama with a bone through his nose; armed yokels turn up at presidential events; Glenn Beck, Rush Limbaugh, and Fox News hammer their vicious talking points, and so on ad nauseam.

The movie traces the sources of the systemic corruption of wealth back to the infamous Citizens United decision of the blatantly biased, activist Supreme Court, which asserted that money equals speech, and therefore, presumably, rich contributors to political causes earn the right to more free speech than anyone else... It suggests a concerted, long-ranging scheme to undermine the power of the people in favor of an oligarchy whose presence already exerts considerable influence in the present system.

Most of "Citizen Koch" concentrates on the work of Governor Scott Walker of Wisconsin and his Republican-led legislature to weaken the power of public service employee unions. The governor, who asserted that Ronald Reagan's defeat of the air traffic controllers won the Cold War, succeeded in abolishing those unions' right to negotiate matters of salary, pensions, health care, etc., which inspired the failed attempt at a recall. That failure, the filmmakers suggest, resulted from money poured into the state by -- guess who -- the Koch brothers.

Aside from its archival footage of speeches, press conferences, television news reports, etc., much of it familiar but still quite compelling, most of the movie, in the uninspired tradition of contemporary documentary, employs talking heads, which translates into many interviews with the same people. Most of those heads belong to Wisconsinites who apparently voted for Scott Walker regretting their choice and lamenting their governor's actions ... too little, too late.

The film shows the amazing growth of anti-union sentiment and action, which only begins with Wisconsin, but spreads throughout the Midwest, with states like Michigan of all places joining the movement to pass a right to work law and thereby castrating the state's once powerful unions. It only touches on the real causes of the Koch brothers' victories and the workers' defeats -- the fact that since at least 1980, union members have voted for union busting politicians, only to wake up and whine about the plight of the worker: power is not taken away, it's given up.

Though repetitive, unbalanced in its structure, too often literal-minded and artless, "Citizen Koch" inadvertently adds to the growing realization that the America we inhabit no longer exists as a concept, an ideal, a beacon to the world. This country never waged unprovoked attacks on another nation, never practiced torture, never arrested people without warrants, charges, or trials, then imprisoned them indefinitely, never kidnapped suspects off the streets of other countries and sent them to foreign prisons, never tapped the phones of all its citizens, and never established the means for a small group of enormously rich people to wage war on the worker and control the governance of the nation. The movie suggests that quite soon the growing influence of wealth will create the destiny of the country: God help us all.