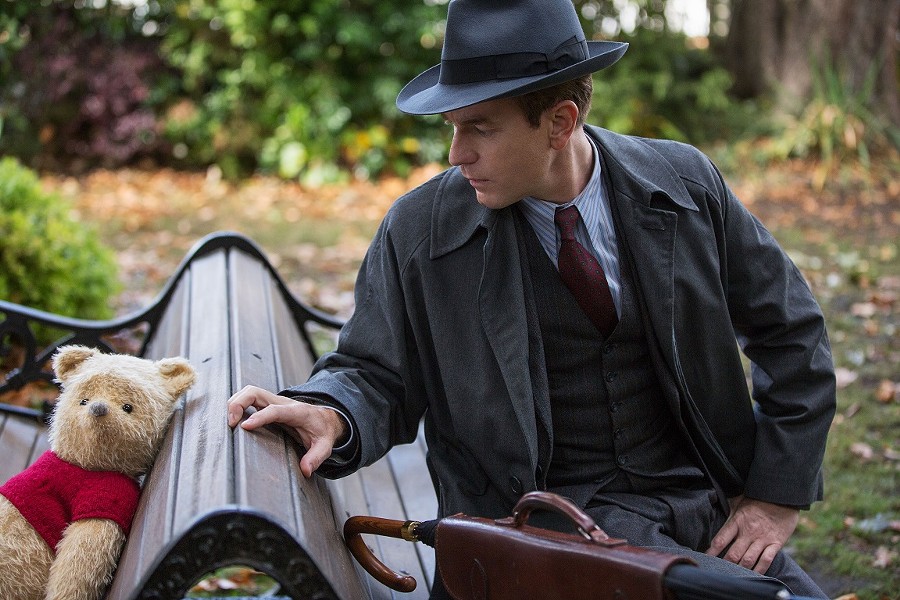 Following in the recent tradition of Disney rebooting their stable of animated classics with new live-action adaptations, "Christopher Robin" continues the saga of Winnie the Pooh, imagining a world where Pooh's human companion Christopher Robin has finally grown up.

Like "Hook" or "Mary Poppins" before it, "Christopher Robin" tells a more melancholic story than one might expect, focusing on an adult rediscovering the lost wonder of their childhood and learning what's really important in life. Though like "Hook" it has some difficulty nailing the tonal shifts, ending up as a kids movie that's aimed more at adults than any children in the audience.

The film begins with a scene from A.A. Milne's 1928 book "The House at Pooh Corner," in which Pooh and the rest of the gang from the Hundred Acre Wood throw a party to say goodbye to Christopher Robin (Orton O'Brien) before he leaves for boarding school. From there, we see a touching montage of the milestones of Christopher Robin's transition to adulthood: losing his father, falling in love, and going off to fight in the war.

By the end, Christopher Robin has grown up (now played by Ewan McGregor) and works as the manager of the efficiency department at a luggage company. His work has come to be the primary focus of his life, and Christopher has long forgotten his old childhood friends from the Hundred Acre Wood.

He's recently been given the duty of reducing expenses, which sadly may require him to lay off some of his colleagues. He's been assigned to put together a presentation over the weekend on the best course of action for the company, a task that means he'll have to miss a planned trip to the family's cottage in Sussex. Christopher's wife, Evelyn (Hayley Atwell) and young daughter, Madeline (Bronte Carmichael) are disappointed, but are clearly used to him backing out of plans in favor of spending more time at work.

Back in the Hundred Acre Wood, Pooh wakes to discover that the rest of his friends have disappeared. As he heads off to find them, he ends up stumbling into the real world, where he meets Christopher once again. Soon he's enlisted his old friend to come back to the forest to help find Pooh, Eeyore, Tigger, and all the others, while helping him shake off the middle-aged malaise that seems to have enveloped him.

Returning to the Hundred Acre Wood, Christopher Robin finds it's grown gloomy and gray, covered in a dense fog. The environment matches the film's somber tone, though the narrative is suffused with just enough joy that it doesn't become entirely depressing. Cinematographer Matthias Koenigswieser shoots the entire film in muted, desaturated tones, and while his photography helps root the story in a more grounded reality, but I couldn't help feeling desperate for a hint of color as the story progressed.

In a somewhat unexpected choice, Christopher's friends from the Hundred Acre Wood are portrayed as real and not just figments of his imagination; every other person they encounter can see them move and hear them talk just like Christopher can. I enjoyed the decision to go full bore fantasy with the story, even if it doesn't entirely make sense.

The characters themselves are brought to life with impeccably rendered CGI, and given the pleasingly tactile look of stuffed animals worn from years of play (except for Rabbit and Owl, who are made to appear as though they're actual animals).

The film's ostensible lesson is that Christopher is neglecting the truly important things like family, and needs to recapture the joy of his childhood, but I couldn't help thinking that pop culture encouraging grown men to cling to the things they loved as children hasn't exactly worked out too well for the world lately.

McGregor is wonderful in the lead role, nicely capturing the way his character's exasperation melts away as he reconnects with his childhood companions. He's also quite good at conveying the affection and deep underlying emotion in referring to Pooh as a "silly old bear."

But the true MVP of the film is voice actor Jim Cummings, once again portraying Winnie the Pooh (as well as Tigger). He's been performing as Pooh since 1988, and his voice conveys sweetness and purity with just a hint of sadness.

Far more than any fancy computer effects, he's responsible for giving life to the loveable stuffed bear of "very little brain" but enormous amounts of heart.