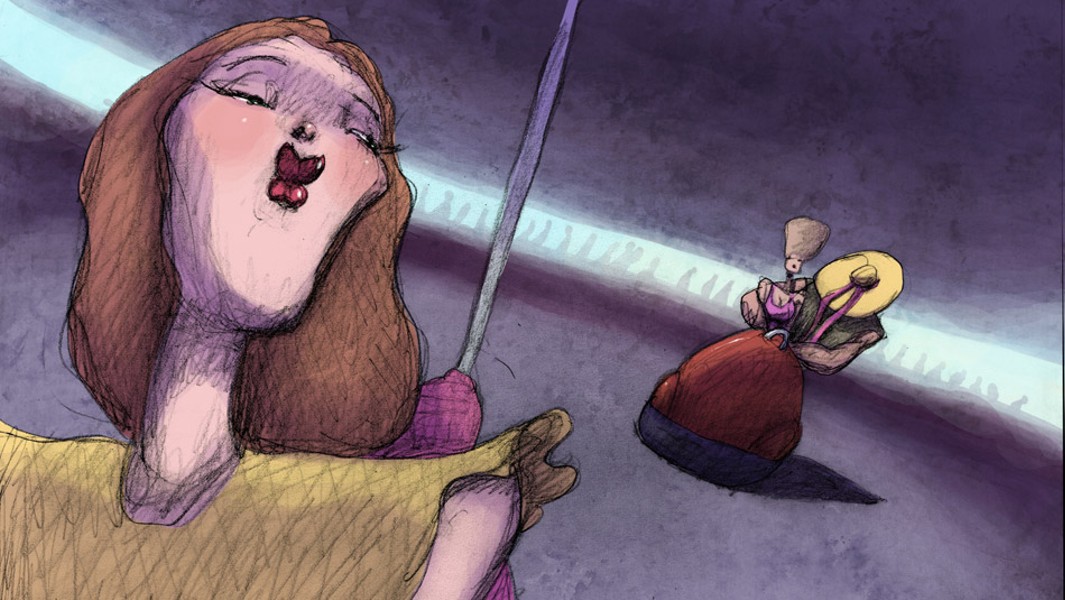 A still from Bill Plympton's "Cheatin'"

The thing about love is that there's too much that our limited language prevents us from truly expressing, so it's fortunate that there exist artists who are able to convey the tangled emotions that mere words can't. If you've ever seen any of animator Bill Plympton's award-winning work, you know that he rarely relies on dialogue anyway. It should come as no shock that his latest feature-length piece manages to weave its reliably trippy, wordless magic through affairs of the heart. Inspired by the cuckoldry pulp of James M. Cain, the often eye-popping "Cheatin'" tells the alternately forlorn and funny tale of a seemingly blissful relationship put to the test when an envious third party tries to tear it down.

Meeting the starry-eyed way so many of us do -- during a rescue from possible electrocution on the bumper cars at a carnival -- the instantly smitten Jake and Ella appear to enjoy a loving, lusty relationship, with gas-station attendant Jake constantly staving off the advances of women drawn to his Plympton-esque 12-pack abs. But when one conniving dame arranges to throw some doubt into his mind, the despondent Jake begins setting up regular appointments at the seedy EZ Motel with a cavalcade of conquests. Cue Ella's confusion, an inept murder attempt, and a serendipitous meeting with El Merto and his Trans Soul Machine, and "Cheatin'" unfolds as a frenetic series of miscommunications and misunderstandings. Add a few buckets of Jake's sloshy, shapeshifting tears, and you've got this film's version of true love.

Plympton seems to enjoy that rare blend of fame and freedom, creating work popular and acclaimed but still a little too surreal for the studio system and answering only to himself. "Cheatin'" might be Plympton's most sophisticated film to date, both in terms of subject matter (sex! nudity!) and imagery that careens between silly and swooning, fluidly rendered with elegant grotesquery and artfully deployed opera. The illustration of Ella's heart gradually opening up is divine, and Jake's botched attempt to end it all is pure Goldbergian slapstick. If there's a quibble here, it's with the mid-century gender relations, as Ella reacts to the wildly unfaithful Jake in mildly degrading ways rather than either of them overtly addressing an obviously important subject. Fortunately, Plympton's trancelike pastels and pencils never disappoint.