'Another Round' tips the bottle to a tipping point 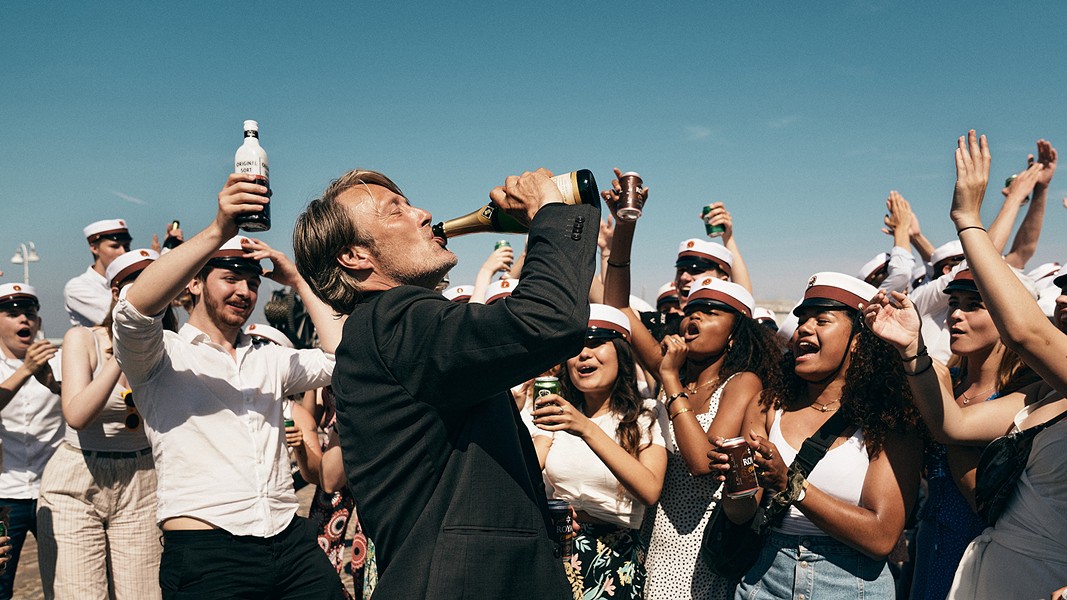 The official film selection chosen to represent Denmark at this year’s Oscars, “Another Round” reunites filmmaker Thomas Vinterberg with his “The Hunt” star Mads Mikkelsen for a story about the pleasures as well as the perils of tossing back a few drinks with your buds.

At the center of the film are four men who decide to battle their midlife ennui with alcohol, hoping it might help them rediscover the joy that’s been missing in their lives.

Mikkelsen plays Harry, a middle-aged high school history teacher who’s long since lost his spark. At home, he’s faded into a nonentity to his wife Trine (Maria Bonnevie) and two sons. Whether at work or with his family, he’s just drudgingly going through the motions.

At some point between swigs of vodka and wine, the men’s conversation turns to an odd theory put forth by Norwegian psychiatrist Finn Skårderud. He suggested that humans are naturally born with a blood alcohol content 0.05% too low, and proposed that by maintaining a perpetual state of intoxication, one might actually be able to attain peak performance.

With little to lose, Martin gives the thesis a go. The next day, he takes a few swigs before stepping into his classroom, soon discovering that he’s able to give his students the best lesson they’ve had all year. And at home, Martin even starts to reconnect with his family, who respond to this reinvigorated version of the man they love.

Impressed with Martin’s results, the friends decide that there might be something to this theory.  They all maintain a steady buzz throughout the work day. To provide themselves some guidelines, they adopt Hemingway’s model for drinking: no alcohol after 8 p.m. and never during the weekends.

Of course things inevitably reach a tipping point as the men decide to test the limits of their little experiment. They quickly increase their consumption in order to (for the sake of science, of course) sample the results from mild inebriation to blackout drunk. But their lowered inhibitions from drinking only start to exacerbate the things they’ve been attempting to avoid, whether it's a troubled marriage, loneliness, or a crippling sense of failure.

The film’s premise might sound like the basis for a Judd Apatow manchild comedy, or a slapstick Adam Sandler-style bro-down, but the thoughtful script (co-written with Vinterberg’s frequent collaborator Tobias Lindholm) doesn’t stick to the neat trajectory we expect. There’s never the same sense of finger-wagging morality you’d expect from the Hollywood version of the same story.

“Another Round” functions as a cautionary tale without ever becoming an After School Special. It may seem obvious from the outside, but there’s a fine line between drinking for pleasure or because of a deeper need. As with most things in life, moderation is key.

The central quartet of performances, led by the always excellent Mikkelsen, match the film’s balance between joyous and tragic. This tale about male friendship, aging, and alcoholism is by turns funny, sad, and ultimately cathartic. At its heart is an idea summed up by the wisdom of Homer Simpson, who once observed that alcohol was “the cause of, and solution to, all of life’s problems.”

Adam Lubitow is a freelance film critic for CITY. Feedback on this article can be directed to Rebecca Rafferty, CITY’s arts & entertainment editor, at becca@rochester-citynews.com.