Give them what they want

"Anchorman: The Legend of Ron Burgundy" took audiences by surprise when it opened nearly a decade ago, in the summer of 2004. The 70's-era tale of Will Ferrell's dimwitted, sexist newsman was a minor hit at the box office and has only grown in popularity in the years since. Many of its more memorable lines ("You stay classy, San Diego") have seeped into the cultural consciousness, and its loose, improvisational feel has influenced seemingly every major film comedy since. Now Burgundy returns in "Anchorman 2: The Legend Continues." Just as in the first film, the barest hint of a plot is merely a framework upon which to hang a non-stop barrage of jokes, and the biggest surprise is how many laughs Ferrell and writer-director Adam McKay continue to be able to wring out of the premise. 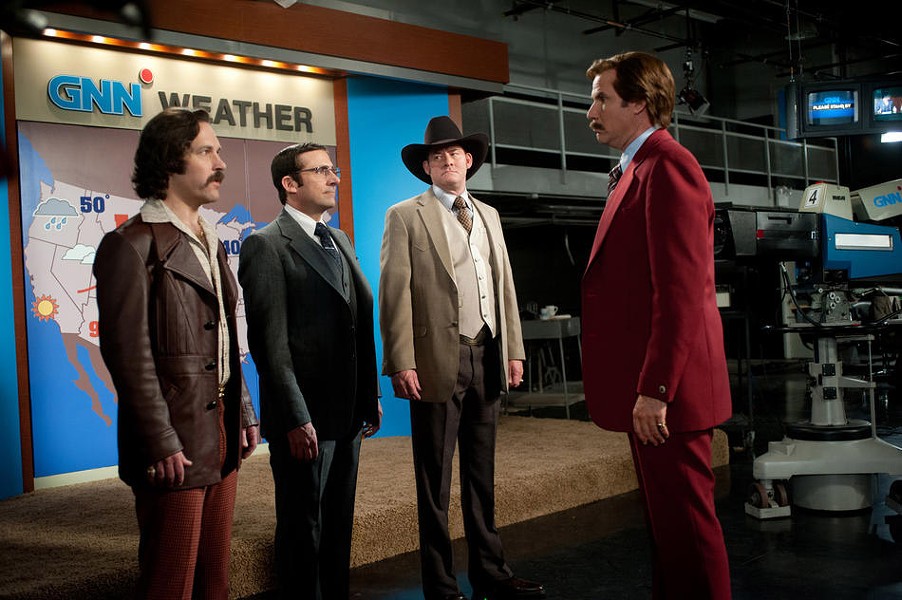 Only a few years have passed in the film's world, which picks up at the dawn of the 1980's. When Burgundy is fired from his job co-anchoring the news with his wife, Veronica Corningstone (Christina Applegate), he's approached with an offer to join the brand-new, first-ever 24-hour news channel, Global News Network. His first action is to make a cross-country trek to round up his former news team: ladies' man field reporter Brian Fantana (Paul Rudd), closeted sportscaster Champ Kind (David Koechner), and simpleton weatherman Brick Tamland (Steve Carell). With the dream team back together, they change the face of American media with a simple question: "Why do we have to tell people what they need to hear? Why don't we tell them what they want to hear?"

There's something about Ron Burgundy being singlehandedly responsible for all of the worst aspects of our current 24-hour news cycle that just feels right, and it's this ingenious concept that gives the film its best material. Why wouldn't an oblivious egomaniac like him be the source of our country's increasingly dumbed-down media?

The new "Anchorman" film maintains the original's shaggy, spontaneous tone -- both films feel like the cast and crew got together and started filming with only the most basic idea about what they were going to do. Relying on the cast's (considerable) improvisational talents leads the film down weird, often nonsensical paths, but it works. Still, clocking in at two hours, McKay is perhaps a little too in love with every joke his actors come up with, and there's no question the film could have used a heavier hand in the editing room.

Ron Burgundy is arguably Will Ferrell's most iconic role; there's no one better at playing doltish blowhards, and this is a role he was born to play. The new characters are something of mixed bag, however. Kristen Wiig is quite good as a suitably odd love interest for Carell, as is a very orange James Marsden as a rival GNN anchorman, but both their plotlines ultimately feel unnecessary. Burgundy pursues a romance with GNN's black station manager, Linda Jackson (the incredibly game Meagan Good), and the racial humor involving her character is by far the least successful aspect of the film. It's not that the jokes are especially offensive, but more that we've seen similar material dozens of times before. It's mildly amusing, but I expect a bit more inventiveness and creativity from an "Anchorman" film.