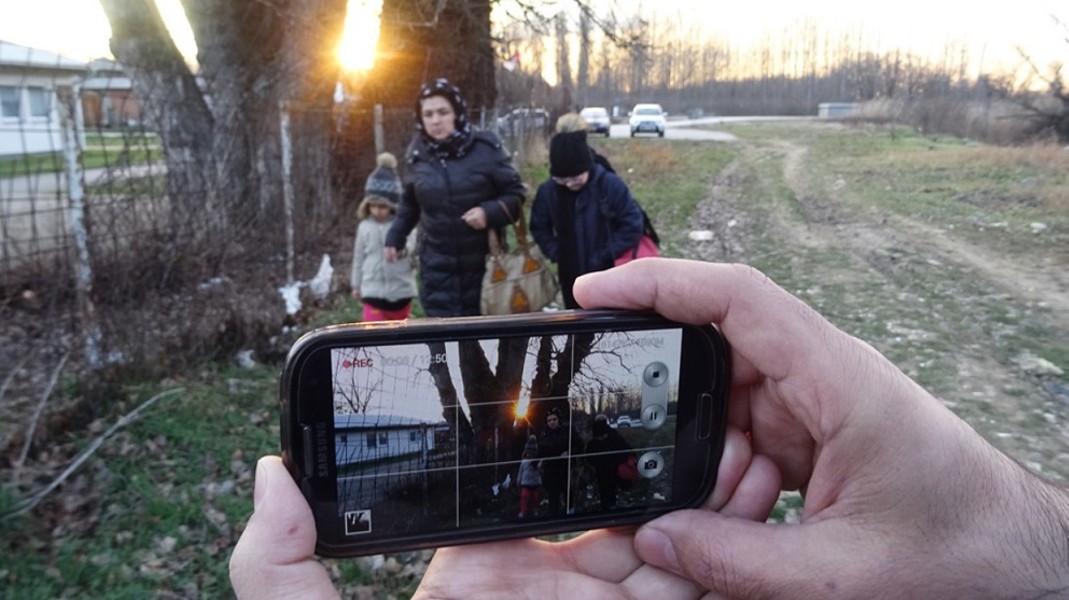 PHOTO COURTESY OSCILLOSCOPE LABORATORIES A scene from "Midnight Traveler," screening next week as part of the One Take Film Festival.

Next week the One Take Film Festival kicks off its third year of celebrating documentary filmmaking, with four days of nonfiction movies, music, discussions, and parties. The festival spawned from The Little's ongoing One Take documentary film series, and presents a varied and enlightening lineup curated by Program Directors Linda Moroney and Bri Merkel.

The range of subjects covered in each installment of the OTFF collectively offer a snapshot of where we are as a culture through the societal issues we face. This year's theme, "nothing but the truth," centers on the continued quest for truth in a time when the facts seem to grow murkier each day.

"Truth is our theme this year, just as it seems to be for our entire country right now," Moroney said in an interview with CITY. "Unlike Hollywood films, documentary shows us truth in all of its complicated, challenging, and nuanced glory. We get to be active participants in these movies. And yes, documentary films are movies!"

And just like the hunger for documentary films themselves, the festival has grown each year, Moroney said. "This year we have more films, more sponsors, more community partners, more venues."

But the films themselves remain the stars of the show, and they're sure to give audiences plenty to chew on -- with the hope that viewers will continue to digest what they've seen over some post-film cocktails and conversation.

The festival also continues its tradition of spotlighting alternative forms of nonfiction storytelling, in past years exploring the possibilities of VR filmmaking and this year diving into the world of podcasting with the "Ear Docs" panel discussion on Saturday, April 27.

And in a festival first, One Take will be premiering "The Biggest Little Farm" with a live score performed by Emmy-winning composer Jeff Beal, leading The Empire Film and Media Ensemble. That screening, at the Eastman School of Music will be followed by a Q&A moderated by film critic Jack Garner. Note: due to the venue, seating for that event will be limited.

What follows is just a taste of the festival's offerings for 2019. For more information and a full schedule of films and festival events visit otff.org.

The riveting "Midnight Traveler" follows the journey taken by Afghan director Hassan Fazili's after the Taliban put a bounty on head, forcing him to flee the country with his wife and two young daughters. Shot entirely with the family's smartphones, the intimate and emotional film puts a vital human face to the refugee crisis. Producer and co-director Emelie Mahdavian will participate in a Skype Q&A following the screening. (Thursday, April 25, 6:30 p.m.)

Penny Lane's provocative and very funny film about the Satanic Temple, "Hail Satan?" finds this likeable collection of rebels and outcasts to be far less interested in devil worship than in fighting against tyranny wherever they see it. The group's valiant efforts to uphold the separation of church and state in particular has made them the scourge of evangelical Christians everywhere, as they battle against the religious right's attempts to enshrine America as a Christian nation. (Thursday, April 25, 9:30 p.m.)

Alison Klayman's "The Brink" observes the infamous Steve Bannon over the course of about a year, beginning when Trump fired him from his position as White House Chief Strategist and concluding with the 2018 midterm election. The picture it paints of the conservative political firebrand is as fascinating as it is troubling. (Friday, April 26, 6:30 p.m.)

As someone whose skin starts to crawl whenever I hear the term "social media influencer," I admit to being somewhat apprehensive about Liza Mandelup's "Jawline," which focuses on Tennessee teen Austyn Tester and his quest for internet stardom. The compassion with which Mandelup tells this story goes a long way, showing Tester to be a well-meaning (if fame-hungry) kid who sees social media celebrity as a means to escape a dead-end life in his rural hometown. (Friday, April 26, 9:15 p.m.)

With "Toni Morrison: The Pieces I Am," director Timothy Greenfield-Sanders uses archival footage and interviews with contemporaries -- as well as Morrison herself -- to deliver a stirring portrait of the trailblazing writer through her life and literary works. A panel discussion with WOC Art Collaborative members Tamara Leigh, Tianna Mañón, and Delores Jackson Radney will follow the screening. (Saturday, April 27, 6:30 p.m.)

"The Proposal" chronicles the efforts of artist-turned filmmaker Jill Magid to create an exhibition inspired by the late Mexican architect Luis Barragán, a task that proves more challenging than anticipated when she discovers that Barragán's entire archive of professional work is owned by one woman in Switzerland. What follows is a compelling examination of art and accessibility. (Sunday, April 28, 12 p.m.)