This letter is in response to the article, “Mayor Warren opposes sex ed, STD bills,” published in the February 26 edition of CITY.

For far too long misinformation about sex education has locked our young people in a straitjacket of ignorance that has led to a culture of bullying, toxic relationships, and even sexual violence.

Comprehensive sex ed is a moral choice for our community. Removing the stigma around discussions of sexuality and gender is proven to combat discrimination, bullying, harassment, and cultures of sexual violence, while promoting a culture of consent. Comprehensive sex ed also delays the onset of sexual activity and leads to improved protective behaviors.

A bill in Albany, A-6512/S-4844, would require New York public schools to teach medically-accurate and inclusive comprehensive sex education from kindergarten through 12th grade that is age-appropriate and reflects national standards and best practices. Kindergarteners need to learn skills for healthy friendships, communication, and personal hygiene just as much as teenagers need medically-accurate, non-stigmatizing education about health care and relationships.

Currently, New York does not require sex education in its schools. Although many schools do provide sex education, the curricula are inconsistent from district to district and have been found in some places to be inaccurate, incomplete, or biased. New York students deserve better.

IMAN ABID, ROCHESTER
Abid is the director of the Genesee Valley Chapter of the New York Civil Liberties Union.

Sex education in kindergarten? On first blush that may sound crazy, but it really isn’t.

School districts across the country are implementing sex education programs beginning in kindergarten. The curriculum in these programs is tailored to children's developmental needs. For instance, classes starting in kindergarten cover topics such as inappropriate touching and safety.

Sexual abuse crises involving children at both secular and religious institutions and the #MeToo movement should make it clear that teaching age-appropriate sex education is very much needed. Yet Rochester Mayor Lovely Warren opposes the idea of k-12 sex education. Her reasoning? Her spokesperson says it all has to do with the mayor’s longstanding religious beliefs.

We shouldn’t have to remind the mayor that she is an elected official representing an entire community of people who have diverse beliefs, not just those who adhere to her religion. One person’s religious beliefs should not be imposed on our secular laws and public policies.

LINDA STEPHENS, GREECE
Stephens is vice president of the Rochester Chapter of Americans United for Separation of Church and State. 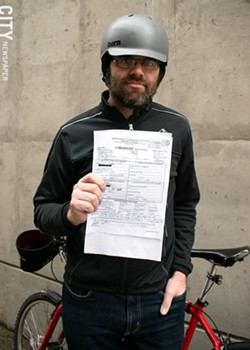 Awareness is growing worldwide that the automobile-based economy and culture of the 20th century is unhealthy for people and communities. We all intuitively understand that the policies, infrastructure, and implementation of transportation planning strongly influence transportation modes and choices.

A key component of this is highlighted by the experience of cyclist Bryan Agnello (“Cyclist gets hit by car, then sued for $700,” February 26). Transportation infrastructure, policy, and personal behavior combine to raise both the perceived and real hazard of choosing a bicycle over an automobile.

Agnello’s experience is by no means unique. All transportation cyclists can recount similar crashes, near-crashes, and frightening incidents. They occur multiple times a day. In the case of Agnello, the ludicrous and surreal nature of the lawsuit filed by the automobile driver who struck him, coupled with Agnello’s visibility as a prominent Rochester cyclist, heightened the profile of the incident to capture wide interest.

Had Agnello not been sued, his case would have been just one of hundreds of similar cases in our area. He would have been fortunate to have escaped serious injury or property damage. The motor vehicle operator would have offered the empty apology, “Oh, I didn’t see him,” and he would have been absolved of responsibility or requirement to compensate Agnello.

As unfortunate as the crash was, I hope this incident can be a catalyst for a much needed discussion of the issues we must address at many levels to move our city toward being safe and comfortable for all travelers, regardless of transportation mode.

In regards to the Editors Notebook, “How long is too long for a presidential campaign?” (February 26), I agree that with nine months to go until the election we are already exhausted by the constant news coverage and scrutiny of the candidates and that shorter campaigns would be refreshing.

But it won’t happen.

Mainstream media outlets thrive off the presidential campaign process. They love being able to have nine people sit on a panel all scratching their heads about why populism and concepts like “Medicare for All” are appealing to the middle and lower class. These same media outlets get to host all the debates, so the longer the process goes on the more debates happen.

On the other hand, though, there is an upside to the long, scrutinizing campaign process in that terrible candidates that look appealing at first aren't able to escape the inevitable public vetting.