Feedback 3/11/20: Go electric, give us sex-ed, children are a blessing

CITY welcomes your comments. Send them to feedback@rochester-citynews.com with your name, your address, and your daytime phone number for verification. Only your name and city, town, or village in which you live will be published along with your letter. Comments of fewer than 500 words have a greater chance of being published, and we do edit selections for publication in print. We don’t publish comments sent to other media.
Go electric

Regarding the article, “County lawmakers take step toward a climate plan” (February 11), it’s great to see both sides of the house in Monroe County coming together to devise a climate action plan. There is much to do, and it is urgent.

Governor Andrew Cuomo, via the Climate Leadership and Community Protection Act, has set a goal of a net-zero carbon economy by 2050. Every locality can contribute with its own policies.

A top priority is electrifying transportation, as gasoline-powered vehicles are the state's largest source of greenhouse gas emissions. Right now, thanks to our legacy hydro power and new wind farms, driving an electric car in upstate New York is comparable to driving a hypothetical gas-powered car getting 231 miles per gallon, according to the Union of Concerned Scientists.

Battery-electric cars have rocket-like acceleration, require almost no maintenance, and charging one from your home is cheaper and more convenient than buying gasoline. Electric cars, buses and trucks will get us on a cleaner path. Monroe County's climate plan is a good sign that our county will do our part.

JOE MOORE, ROCHESTER
Moore is the manager of the Tesla Owners Club of New York State. 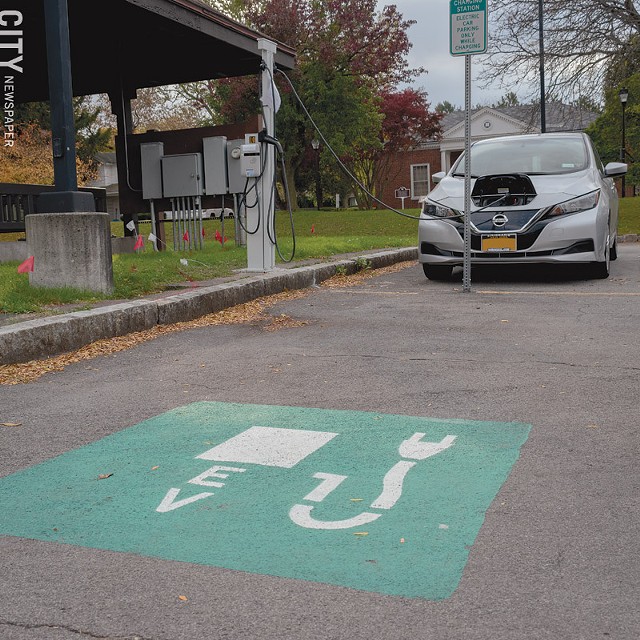 Right now, government bureaucracy is such that only five renewable energy projects have been approved in New York in the last eight years, stalling hundreds of jobs and local investment. Now, Governor Andrew Cuomo wants to minimize hurdles and speed up the process of opening these facilities (“Local governments wary of Cuomo’s renewables plan,” March 4).

This is good news for local communities. One medium-sized solar project could bring $1 million in local landowner rent, another $1 million in taxes, 300 family-wage jobs and discounted electricity for the area.

Even though communities are concerned that the new rules may favor the state over local government, those eager for solar farms and wind plants to open up have felt stymied by the current cumbersome procedures. New state rules will continue to be driven by local zoning and environmental concerns.

Without a way to get renewable energy plants working sooner, New York will miss its legislated carbon-free goal. Local government working with the state can make a 70% renewable electric grid by 2030 a reality.

The political problems we have in the United States and here at home in Rochester need lengthy discussion and debate. People have become disinterested in politics over the years. With our comfortable lives, we may feel that it really doesn't matter who is elected. Who cares, right?

But there is confusion and anger in the Democratic Party that needs to be resolved. Otherwise, Trump will surely win. Now, with the threat of another four years of his presidency, people are starting to get interested. People are waking up!

Sex-ed bill will protect our youth

An article in the February 26 edition of CITY discussed a bill (A6512/S4844) which would make it mandatory for public schools in New York to include age-appropriate, medically accurate sexual education from grades K-12 (“Mayor Warren opposes sex ed, STD bills”).

As a doctor who takes care of children, I wonder if those who oppose this bill are aware of its contents. Age-appropriate, medically accurate sexual health education starts by teaching children about their bodies, healthy relationships, gender identities and respect for self. It then progresses to teaching adolescents about puberty, peer pressure, consent, contraception and the prevention of sexually transmitted infections (STIs). The goal of comprehensive sexual education is to empower youth with the crucial information they need in order to make healthy decisions.

Opposition to this bill suggests that sexual education could take away parental rights to be involved in their children’s sex education causing more harm than good.

While it is not clear what these hypothetical harms could be, we do know, for example, that Rochester has one of the highest STI rates in New York state. Part of the purpose of age-appropriate sexual education is to prevent such real harms. Moreover, comprehensive sexual health programs are designed to augment and complement the sex education that students receive from their families, trusted adults and health care professionals. Unfortunately, many young people, including many of my patients, lack models of healthy relationships to learn from and trusted adults willing and able to discuss body changes, sexual consent and safe sex practices at home.

It is our job as a community to protect our youth. Passing legislation to ensure adequate education is where we can start.

KARINA VATTANA, ROCHESTER
Vattana is a medical doctor and pediatric resident at the University of Rochester Medical Center.

Children are a blessing

Jarrad Ackert’s letter criticizing CITY for publishing the article about the local musician composing songs for her unborn child was not only mean-spirited, it was also wrong-headed (Feedback, February 26).

Mr. Ackert claims that the paper should not be “stroking the ego of someone who decides to give birth to a child, knowing full-well the implications of exponentially accelerating climate change/ecological extinction.”

He is not only ungenerous in his sentiments, but there is no way to know if the future will be as he predicts. People have forecast the imminent end of the world for millennia. Somehow it seems to survive. Certainly, history records many catastrophes and much pain in the world, but over time the record of humanity has been one of steady, if uneven, progress towards prosperity and better lives for a greater number of people. There is every reason to believe that the future will continue to follow this path.

This is not to deny that our world faces, and will continue to confront, serious problems. It always has. But I would argue that what the world needs is more children raised by people committed to trying to help solve those problems and create a better world.

Furthermore, children are a blessing in and of themselves, bringing abundant joy to the people around them. It would be a sad world with fewer children laughing and playing and more cranky adults writing angry letters.