The commentary on the Webster lettuce farm proposal (“Let us have lettuce in Webster,” Editor’s Notebook, December 18) got it pretty much wrong. The controversy surrounding this issue is well-founded and not simply a knee-jerk NIMBY reaction.

Neighbors of this 140-acre farm are justified in being indignant about an industrial complex scarring this landscape in an unprecedented manner. Agriculture as a zoning and land-tax designation refers to the conventional working on and growing of crops in the soil comprising the land. Taxes and utility values were based on the soil types. People have every reason to expect these definitions hold true in the present era. The Webster Planning Board unfortunately did not uphold the historic zoning definitions, and caved under corporate pressure, forcing the present lawsuit brought by town citizens.

The glass-enclosed, indoor growing factories comprising the “farm” in question are total departures from this, and demand a wholly different zoning classification. The proposed seven growing facilities, each 7 acres in area, would completely cover and displace most of the topsoil and all potential productivity. These hydroponic factories require more energy and water than a small village. It is clear that this project is industrial in nature and does not fit in conventional agricultural zoning.

That’s the problem, not NIMBYism.

The local citizens’ expectation of conventional farming adjacent to them or, alternatively, clusters of houses or properties similar in scale and landscape, is totally justified. These people have paid taxes for many years to the town, and the town has abdicated its responsibility to them. 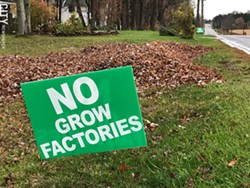 CEA Farms, the company behind the factories, is a near-complete unknown entity, whose failure to establish a complex in Onondaga County a few years ago marked its last attempt to locate in New York. The estimate that this project would create 375 jobs — mostly low paying factory gigs — is unreliable since there is no standard to which to compare. The company’s officials are not farmers. CEA’s backers consist of an amalgam of investors, bankers, and business opportunists, as far as I can make out.

No one locally with whom I’ve spoken is opposed to hydroponic indoor growing factories per se. It’s the location, fraught with misapplied zoning, that ignites their discontent. Put these facilities where they belong, on industrial sites, former city dumps, unused acreage near old factories, Kodak plant sites, etc. Plenty of likely locations to the east would welcome them (see the Intergrow tomato factory in Ontario, Wayne County).

Year-round agriculture production is a good bet for success. But don’t ruin precious farmland and well-functioning neighborhoods in the process.

A lot about the 27th Congressional District is rigged

I miss the in-depth commentary of CITY’s “Urban Journal.” The commentary in the “Editor’s Notebook,” which replaced the Urban Journal, seems to regard non-local topics as taboo and has moved safely to the middle to the point of being bland.

While I appreciate much of Jeremy Moule’s writing, an example of an editorial without depth, in my opinion, was “Congressional special election date looks like a rigged game” (Editor’s Notebook, January 15). In the editorial, Moule says he is from the area of the 27th Congressional District and therefore has insight into the feelings that people have about the proposed special election there. Throughout the piece he repeats his view and his belief that there will be popular resentment toward the Democratic Nate McMurray, should he win.

But Moule doesn’t quote anyone except the Republican party chair and the Monroe County Republican elections commissioner. There are many other views in the 25th Congressional District, where I live.

Rochester has a housing crisis, and the consequences are felt most severely by people of color and residents living in poverty.

It has been well documented that nearly 9 percent of the city’s public school students experience homelessness at some point during the school year, and that black residents spend a disproportionately high percentage of their income on rent.
Rochester’s approach to solving the crisis has prioritized the needs of the rich over those of its poor and working class. For years, the city has provided enormous tax breaks to high-end and commercial developers, while poor residents in some cases pay property taxes that are disproportionately higher than those of wealthy downtown households.

Currently, Mayor Lovely Warren is looking to expand the city’s CHOICE program, which offers generous tax breaks for new, owner-occupied housing, despite the argument that these tax incentives favor the wealthy who would build anyway. The mayor has also touted the city’s “Opportunity Zones” (OZones), a gift from the Trump administration’s kleptocratic tax cuts, as another possible solution to our housing crisis. Under the program, investors can eventually enjoy tax-free profits on developments in the zones.

OZone development will exacerbate inequality and harm underprivileged neighborhoods. One city Ozone is downtown, where most new housing is luxury apartments and condos. In economically distressed OZones, new development will increase the cost of living. If unaccompanied by rent control, such investments will quickly price residents out of their homes.

The latter offers emergency rent stabilization if the city can demonstrate a vacancy rate of less than 5 percent. However, Census Bureau data indicate that the rental vacancy rate might be as high as 7.6 percent, meaning Rochester may not qualify. Even with ETPA, rents in Rochester are already unaffordable. We need to think beyond rent control.

A vacancy tax would decrease rents and generate revenue that could go toward permanently affordable community land trusts, although the tax would likely require state authorization.

Too many Rochester residents cannot afford housing, and too many of those who can are living in squalor. There are things we can do immediately, like ensuring real enforcement of the housing code and putting tax breaks where they belong — in the hands of poor and working people.