UPDATED 3/29/13 to correct the date for the Park Avenue Summer Arts Festiva.

No matter if it's spring, summer, fall, or winter, there are so many events going on in Rochester on any given week that it's almost impossible to keep track of them all. It's a little bit like a constantly updating Twitter feed. So we took that social-media inspiration for this year's Annual Manual special events/festival guide. Below, you'll find a host of upcoming Rochester-area events described in 140 characters or less, along with actual Tweets by people who have enjoyed previous editions of those festivals.

Did we miss an exciting upcoming event? Leave it in the comments section of this article, below. 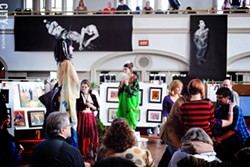 High Falls Film Festival April 18-21 • Little Theatre, Dryden Theatre, Cinema Theater • The film festival is back with its original name and a renewed focus on women in front of and behind the camera. • highfallsfilmfestival.com, @HighFallsFF

Sheep Shearing Festival April 20 • Springdale Farm, 700 Colby St., Spencerport • Still trying to figure out the best way to clean your wool? Learn all sheering with demos at this festival, which also has live music. • heritagechristianservices.org/springdale

Color Vibe 5K Race April 20 • Monroe Community College, 1000 E. Henrietta Road • This is one race that everyone will finish with flying colors. Get blasted at the color stations that are sprinkled all throughout this 5K. • thecolorvibe.com, @colorvibe

Signed up for Color Vibe 5K in Rochester! So excited! #colorvibe

City Newspaper Best Busker Competition May 2 • East Avenue, between Chestnut and Alexander • Local musicians play on the sidewalks on the East End for votes from passersby and the chance to win gift certificate prizes. • rochestercitynewspaper.com, @roccitynews

Roc City Tattoo Expo May 3-5 • Radisson Hotel Rochester Riverside, 120 E. Main St. • More than 100 tattoo artists, coming from across the US, Canada, Japan and Europe, will be tattooing on site at the fifth annual expo. • roccitytattooexpo.com

Roc city tattoo expo this year has been a blast. Got tattooed by mike Bennettlockerz.com/s/133186410

Lilac Festival May 10-19 • Highland Park • One of Rochester's oldest and most beloved festivals heralds in another beautiful summer with 500+ lilac varieties and many other events. • lilacfestival.com, @ROCLilacFest

Memorial Day Parade May 27 • Starts at East and Alexander, then west onto Main to Plymouth • Come out to commemorate the veterans of our armed forces, and those who gave their lives so that we could keep on celebrating. • cityofrochester.gov, @CityRochesterNY

Back at it with the sun and warm temps re-appearing at the @wegmanslpga as @stevetasker89 tees off at hole 15 say.ly/lcB3uc6

Festival on the Green June 14-16 • Fireman's Field and Harry Allen Park, Honeoye Falls • Get plenty of fresh air with three days of family events and live music around the Village of Honeoye Falls. • festivalonthegreen.us

Tips for todays Real Beer Expo in Rochester.... don't forget a chair, get a taxi, drink lots of water! eepurl.com/erPpc 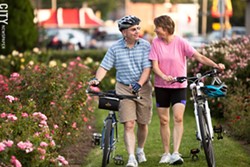 @rochesterrhinos mascot Rex is getting ready to board the #7 bus to go Sahlen's Stadium on Roc Transit Day! ow.ly/i/Iecc

Spent Saturday with Tristan at the Sterling Renaissance Festival. Big fun, especially the jousting. We got serious sparring swords.

Big Rib BBQ and Blues Fest July 11-14 • Highland Park Festival Site, Highland and South Ave • Listen to the blues with your bibs on at this barbecue festival with more than 20 live blues artists and ribs from vendors across the US. • rochesterevents.com, @RocEvents

Stuart Horse Trials July 11-14 • Townline Road and Murray Road, Victor • Giddy up for a four-day triathlon of equestrian sports, with more than 300 competing riders from across the United States and the world. • stuarthorsetrials.org, @StuartHorseTrls

Hill Cumorah Pageant July 12-13, 16-20 • Hill Cumorah, near Palmyra • Dramatic depictions of passages from the Bible and the Book of Mormon. An outdoor theater event of Biblical proportions. • hillcumorah.org/pageant, 315-597-5851

Corn Hill Arts Festival July 13-14 • Corn Hill neighborhood • Check out works from hundreds of artists and crafters, with live music and other activities through the weekend. • cornhillartsfestival.com, @cornhillartfest

Canandaigua Arts and Music Festival July 13-14 • Commons Park, Canandaigua • This year's festival is just a small part of Canandaigua's 100 Days of Entertainment, with free events every day from May to Memorial Day. • canandaiguaartfestival.com, 394-0787

Civil War Re-enactment July 20-21 • Genesee County Village and Museum, 1410 Flint Hill Road, Mumford • Whether you're with the Union or still rooting for the Confederates, revisit the battles at one of the Northeast's largest reenactments. • gvc.org, @GCVandM

Ten ugly men festival got the best of me. No shoes, no shirt, no Deich. #oopps #HAM #DOLO http://instagr.am/p/NZVg5zsJAA/

Spencerport Canal Days July 27-28 • Along the Erie Canal, Spencerport • Time for Spencerport folks to get their own canal celebration with arts and crafts, entertainment, food, and canoe races. • spencerportcanaldays.com

Love celebrating Canal Days in Spencerport, NY. Haven't been in years. Small town fun, then back to NYC with the wifey.

Main Street, Lima • If you're at a crossroads about how to fill the time between one festival and the next, stop by this one in the little town of Lima. • crossroadscouncil.org

Rochester Teen Film Festival August 7 • The Little Theatre, 240 East Ave. • The kids are all right — they've been busy making their own movies. See the works of local high school filmmakers in this juried festival. • thelittle.org, @TheLittleRoch

Pageant of Steam August 7-10 • New York Steam Association, Gehan Road, Canandaigua • Travel back in time — albeit not very quickly — with these demonstrations and exhibits of steam-powered machines and vehicles. • pageantofsteam.org

Lots of photos from the Pageant of Steam hard to believe these 100 year old tractors still work! ...flickr.com/photos/kgregso…

2013 PGA Championship August 8-11 • Oak Hill Country Club, 346 Kilbourn Road • One of the biggest golf championships in the world, and the last of the golf season, comes to Rochester. • pga.com, @PGAChampionship

Thank you to the PGA for allowing Rochester, NY to host the 2013 PGA Championship at Oak Hill CC. This is our Super Bowl!#PGAChampionship

Palmyra Pirate Weekend August 9-10 • Village of Palmyra • Anchors away, mateys! Step onto the poop deck for a weekend with live music, a 5K race, pirate tales, and a free screening of "The Goonies." • eriecanalpirates.com

Carifest August 10 • Riverside Festival Site, between Court Street and Exchange Street • Spend your Rochester summer in the Caribbean, if only for a day. Caribbean heritage is honored with food, music, a parade, and other events. • rwifo.com

Carifest parade goin down in an hr in daROC Then following>>>THE ROCHESTER CARIFEST!!!! w585lite.podomatic.com/entry/2011-05-… Bacchanal Season in full effect

Avon Rotary Corn Festival August 10 • Genesee Street, Village of Avon • Corn has been a staple of WNY agriculture for centuries. Keep the tradition alive at this festival with locally grown corn and other activities. • avonrotary.org

Finger Lakes Riesling Festival August 10-11 • Lakeshore Drive, Canandaigua • A weekend wine festival for people who know what they like: fine Rieslings, all from wineries around the Finger Lakes region. • rieslingfestival.com, @RieslingFest

Arts at the Gardens August 17-18 • Sonnenberg Gardens and Mansion, Canandaigua • A sale and juried fine arts and craft show with paintings, photos, jewelry, sculptures, and other works from more than 100 artists. • artsatthegardens.org, @SonnenbergGnM

New York State Festival of Balloons August 30-September 3 • Dansville Municipal Airport (Maple Street entrance), Dansville • It will be hard to not to get carried away at this Labor Day weekend festival of hot air balloon rides. • nysfob.com

Labor Day Parade September 3 • Downtown Rochester, from Alexander Street and Plymouth Avenue • You've got to fight for your right to, uh, work, at the Labor Council's annual parade, featuring labor unions from across Rochester. • rochesterlabor.org

Tons of people at Clothesline Arts Festival Sat & Sun. Hope the #local artisans did well! Share a pic of what you bought! http://ow.ly/2tIdm

Mendon Station Festival September 7-8 • Mendon Station Park, 1371 Pittsford Mendon Road, Mendon • The Mendon railroad station might be long gone, but passengers of all ages can still board this weekend adventure of arts, food, and races. • mendonfoundation.com

Today's the day: all the cool people will be at Greentopia Festival at High Falls, including Greenovation!Join... fb.me/1A7gIhBO5

Rochester Pagan Pride Day Festival September 14 • Ellison Park • After being canceled last year due to a severe storm warning, the Pagan Pride festival survived the overdose of irony and returns this year. • rochesterpaganpride.org

Met Abe Lincoln today. No Big Deal. Check it out on my iSpy gallery from the Palmyra Canaltown Days. mpnnow.com/photos/x827639… #flx

Rochester Sci-Fi, Comic Book, and Anime Con September 20-22 • Main Street Armory, 900 E. Main St. • Whether you're a gamer, a comic collector, an adamant anime viewer, a sci-fi lover, or all of the above, you can get your geek on here. • rochesterscifianimecon.com

Rochester Sci-Fi and Anime Con or Roc-Con, my first ever Convention. Will be going with my younger Brother. is.gd/igI4Jg #GetGlue

Rochester Marathon September 22 • Downtown Rochester • This is what you've been training for all year: a 26.2-mile marathon and relay and a 13.1-mile half-marathon through the city. • rochestermarathon.com, @ROCMarathon

Naples Grape Festival September 28-29 • Naples Village, State Route 21, Naples • If you're not into smashing grapes, you can admire them more delicately at this festival with a pie contest, entertainment, and live music. • naplesgrapefest.org

AppleUmpkin Festival September 28-29 • Gaslight Village, Wyoming • Ca''t decide if you prefer apples or pumpkins? You won't have to choose between the fall favorites at this arts and craft festival. • appleumpkin.com

Getting kettle corn for my lovely wife - and there's beer, too! (@ Autumn Festival of Ales) [pic]: 4sq.com/Q0VET5

Cohoctan Fall Foliage Festival October 5-6 • Town of Cohoctan • There will be a lot of excitement in the small town of Cohoctan during this weekend: Fireworks, football game, art shows, parade, and more. • fallfoliagefestival.com

Fall Festival feat. Agricultural Society Fair October 5-6 • Genesee Country Village and Museum, Mumford • This harvest fest has competitions in everything from pies to crafts to the biggest pumpkin, as well as vintage farm exhibits. • gcv.org, @GVCandM

Hilton Apple Fest October 5-6 • Hilton • Forget about the pumpkins here — this festival is all about the apples, not to mention arts and crafts, a pie contest, and a car show. • hiltonapplefest.org

Had a fabulous time at @imageout tonight! Great films and good company (like Michael and Jessica! LOVE them!)! yfrog.com/kkhz9exj

Rochester Fashion Week • October 16-20 • Various locations downtown • Strut your stuff, or admire the stuff of others, during a fabulous week of fashion shows, a boutique crawl, and a clothing switch and swap. • fashionweekofrochester.org, @Roc_FashionWeek

Thank you for all the support at my performance last night during the #Rochester #Fashion #Week - bit.ly/SU8tD7