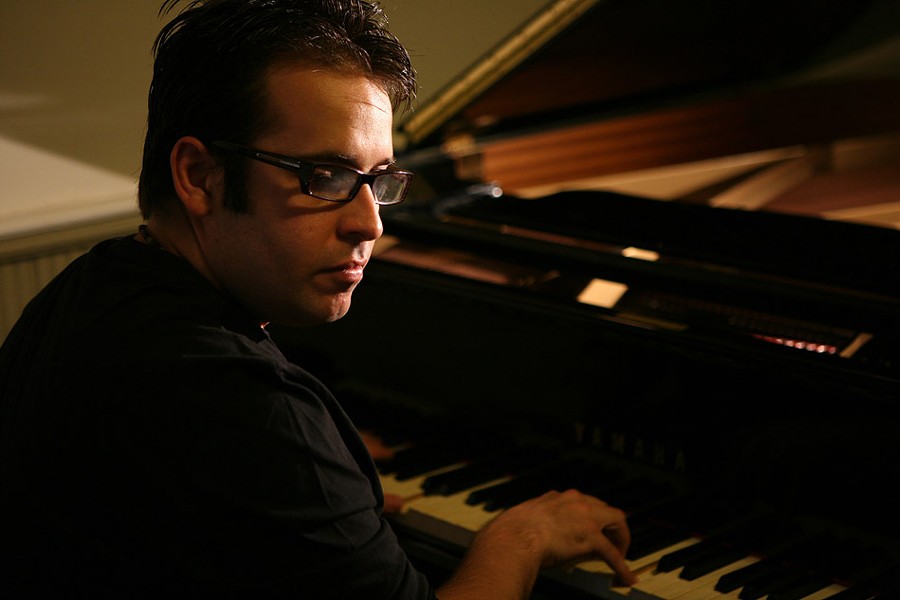 Manuel Valera is a tough man to get a hold of. When I finally caught up with him by phone, he had just returned to his home in New York City on a red-eye flight from the West Coast. But he didn't have a lot of time: he was getting ready to leave later that day for Poland, where he had 10 days of concerts scheduled.

"It comes with the territory," Valera says. "But it's fine. The good thing is when I'm home, I'm home."

The territory he refers to consists of being one of the most sought-after pianists on the scene today. Since arriving in New York in 2000, Valera has lent his talents to a variety of artists, including Arturo Sandoval, Paquito D'Rivera, Brian Lynch, Dafnis Prieto, and Jeff "Tain" Watts. But it's his work as a leader that's taken off. In 2013, his album "New Cuban Express" was nominated for a Grammy Award for Best Latin Jazz Album.

Born and raised in Havana, Cuba, Valera started playing saxophone to follow in the footsteps of his father, one of the most famous saxophonists in Cuba. He studied classical sax at a top conservatory.

"I was infatuated with the whole kid-wants-to-be-like-his-dad phenomenon," Valera says. "But then I realized that I really didn't like the saxophone. The rules in the conservatory were such that you couldn't switch to another instrument.

"The good thing for me is that everybody had to learn to play piano, so I focused a lot more on my secondary instrument. It was very easy and natural for me from the beginning."

Although it's been 17 years since he left Cuba, in terms of music Valera has never left his birthplace behind. But his brand of jazz is a unique blend.

"It's always there," Valera says. "But my upbringing was different than that of other Cuban musicians because my dad was more interested in jazz than Cuban music, so I grew up listening not only to Cuban bands but also people like Chet Baker and Paul Desmond.

"My father was into the West Coast cool jazz thing, so I listened to Bill Evans, Lennie Tristano, Jim Hall, and Cannonball Adderley. It was very eclectic and different. My music kind of lies in the crack between those two things. I play with a lot of straight-ahead people; I also play with a lot of Cuban people."

And Valera occasionally gets the chance to perform with his father, who he recently brought along as a special guest to a festival in Uruguay.

On his albums and in concert, Valera is a superb improviser. When you hear him, it sounds effortless, but it takes a lot of work to achieve the ability to create music spontaneously.

"When I'm improvising, I try not to think about technical things," Valera says. "That aspect of the music is better left in the practice room. When I'm performing, I like to be in the moment. Whatever happens happens. With the trio, we've been playing together for so long that we're playing off each other all the time."

Valera's music may evoke ideas and images that go far beyond the melody. His tunes are reminiscent of tone poems in classical music.

"I love painting pictures," says Valera. "My main focus technically is to have memorable melodies. It may be difficult to play, but I don't want it to be difficult to listen to. I like to paint a picture or conjure a memory of mine. I'm inspired by all forms of art — painting, poetry — I find that it's not just music that inspires me."

His latest album, "The Seasons," is a prime example. It's a contemporary take on the concept behind Antonio Vivaldi's "Four Seasons." But it's a view of the seasons through decidedly contemporary eyes.

"The whole thing that we're going through now with global warming, if you're going to write something about the seasons, it couldn't be as delightful and happy as Vivaldi's," Valera says. "But like Vivaldi, harmonically, one thing melds into the other. It involves, ultimately, the cycle of life."

This isn't the first time Valera has turned to a classical work for inspiration. He has previously re-imagined Gustav Holst's "The Planets."

Like most jazz musicians, Valera occasionally covers a standard from the Great American Songbook. But he also keeps his ears open for more recent songs that are destined for standard status. On his new album, and in recent concerts, he's been playing Leonard Cohen's "Hallelujah."

"I was fooling around with his song after he passed away last year, and my wife really liked what I was doing," Valera says. "She said, 'You should record that.' It has a little bit of world music but it also has a churchy thing.

"It's one of my favorite songs. I played a concert in Toronto, and I thought it would be interesting to play that song. It sounds simple but it has a lot of meat. It's also a challenge with the lyrics being such an important part of the song. We felt that it had to have some sort of undertone with the bass and the rhythm. It's a gorgeous song."