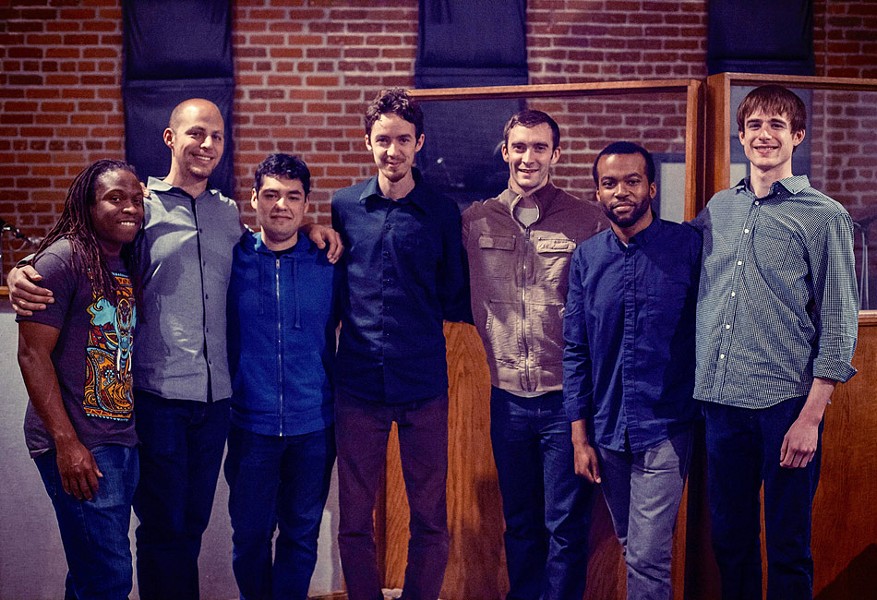 Spoiler alert: there will be no holophonor on stage when the group of the same name performs at the Xerox Rochester International Jazz Festival. Viewers of the television show "Futurama" may be disappointed, but lovers of progressive jazz will be just fine.

In "Futurama," a holophonor is a 31st century musical instrument akin to an oboe that projects a hologram. Here, it's the name of a somewhat futuristic band.

"Our vibraphonist Diego Urbano, is one of the most creative people I've ever met," says Mike Cottone, the group's trumpeter. "We could never come up with a band name. Diego wrote a song titled 'My First Holophonor.' After trying all these crazy names, the visual element of playing a holophonor fit. It's pretty creative music."

Cottone, a founding member of the band, was born and raised in Rochester. Encouraged by Rush Henrietta High School Band Director Dan McMurray, he went on to study with Clay Jenkins and Doug Prosser at the Eastman School of Music before heading to The Julliard School in New York City for a master's degree.

It was at Cottone's next educational step, the Thelonious Monk Institute of Jazz at the University of California, Los Angeles, where he met the group of musicians who would bond and become Holophonor.

"The Monk Institute was life changing," Cottone says. "I played with these guys two to five hours a day. We all lived in the same building in two rooms. We slept, ate, breathed together for two years. We had different artists to work with: Jerry Bergonzi, Jim Snidero, Terrance Stafford, and Nicholas Payton."

At least once a month, true jazz giants Wayne Shorter and Herbie Hancock would visit the institute for a few days each.

"We would spend quite a bit of time with these guys," Cottone says. "It was an incredibly rare opportunity to hear all of their stories, find out why they made this decision with Miles Davis or why they wrote a particular tune this way."

It wasn't always about music, though. Sometimes, Cottone learned from watching sci-fi movies or a classic like "Lawrence of Arabia" with Shorter. "It was a wild experience to have him comment on the movie while you're watching it. He's a completely unique guy."

But nothing compared to the critiques Shorter could offer about Cottone's playing.

"I remember one day being really sick," says Cottone. "I had a fever and debated whether I should even come to class. But I showed up because I wanted to have class with Wayne Shorter. I took a solo on a tune I had written, and he stopped me, and said, 'Hey, you're on to something.'

"I was playing a different way because I was physically sick, but he was telling me, 'You're relaxed right now, and you're not over thinking it, and you're not trying to force a solo.'"

Best of all, Shorter produced Holophonor's upcoming second album. Cottone hopes to have copies of the album in time for the festival.

"We went to Henson Studios in L.A. and laid down a bunch of songs, and we had Wayne Shorter in the booth the entire time," Cottone says. "He would say one or two things into the microphone and completely transform a take. He was mainly there to make us all calm and not overthink the music."

Now living in Los Angeles, Cottone does a little bit of everything musically. In addition to Holophonor, he tours with Postmodern Jukebox (who will also be at the XRIJF) and has also worked with Al Jarreau, Neil Diamond, Rubén Blades, Paul Anka, The Jazz at Lincoln Center Orchestra, and Blood, Sweat & Tears. He recently completed the Bette Midler Divine Intervention Tour.

Of all the tours and studio gigs, none of them are as satisfying as his work with Holophonor.

"It's definitely my most creative outlet," Cottone says. "There's a trust, a certain respect we have for each other. We play tunes that will never sound the same two times in a row because there is so much creativity, so much raw energy coming from that band."

He also enjoys writing for the band. "When you're writing, you really see yourself in a bare state — you're exposed. Part of you is going to come out in that composition. Holophonor has given me a place where I have a group of guys that I trust to bring things to, and they will help me make it a better piece."