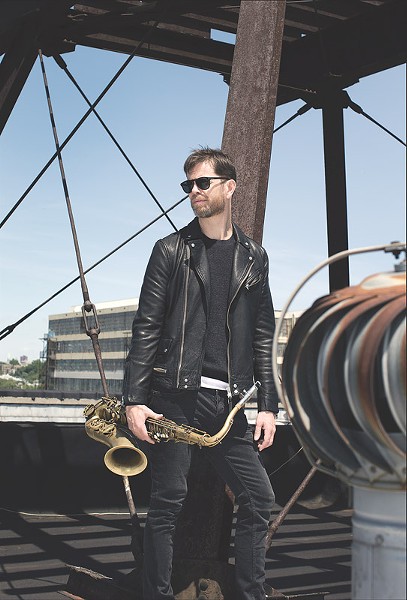 When Donny McCaslin went to parties as a teenager in the early 1980's, there was one record that was sure to be played: "Let's Dance" by David Bowie.

"I especially liked 'Modern Love' and 'China Girl,'" says McCaslin of two of the album's most popular songs. "I always describe it as the soundtrack of my youth."

By then a budding jazz saxophonist, McCaslin could never have imagined that three decades later he would become a major part of the "soundtrack" of "Blackstar," Bowie's final album.

McCaslin's involvement with Bowie began in 2014 when Bowie asked Grammy-winning jazz orchestra leader Maria Schneider to collaborate on an arrangement for his song "Sue (Or in a Season of Crime)." McCaslin, a saxophonist in Schneider's band, was tapped for a solo that weaves in and out through the seven-and-a-half minute cut.

"I was approaching improvising over that song with my own aesthetic. I wasn't trying to play a rock solo at all," McCaslin says. "That version of the song is so epic. It was such a thrill to play on that. When we recorded it, I didn't know they were going to use the whole thing. I just thought it would be a little ornamentation of sax here and there. When I heard it back, it was from start to finish."

When McCaslin was growing up in Santa Cruz, his dad, a vibraphonist (who is 90 and still playing), would bring him along to gigs.

"I would sit on a chair on the bandstand and listen," McCaslin says. "That was my exposure to jazz music." His dad's band played everything from Great American Songbook tunes to funk songs like "Mustang Sally."

At the age of 12, McCaslin made an impulsive decision: he would like to play tenor saxophone. His dad not only lined up lessons with the sax player in his band, he also jammed with his son.

"There was an area behind my mother's house with barns full of chickens, rabbits, and goats," McCaslin says. "My dad would set up his portable keyboard and accompany me. The first song I learned was 'Tequila,' and I was learning Ellington songs. Sometimes it lasted 15 minutes, and sometimes it went on for hours."

When he was a beginner, his dad let him sit in with his band. And he made sure McCaslin attended a high school with an excellent music program. It all paid off in a full scholarship to Berklee College of Music in Boston.

"I was in Santa Cruz playing all the time, and there were a lot of great young musicians, but Berklee took that up to a stratospheric level," McCaslin says. "There were so many great saxophone players. It was a shock, but it was a great shock to go there because it really motivated me to work harder."

Over the next three decades, McCaslin played with Steps Ahead, Dave Douglas, and many others, eventually establishing his role as a leader.

In 2014, with a dozen albums behind him, McCaslin was on stage at 55 Bar in Manhattan when he looked out into the audience and saw Bowie. After his work on "Sue," Schneider had encouraged Bowie to collaborate further with McCaslin, so he was checking out the saxophonist's band.

"It's an intimate room. It's hard to hide there," McCaslin says. "I saw him out of the corner of my eye. My approach was not to think much about it, just concentrate on the music. I was a little bit nervous, but I tried to just be in the moment musically."

Bowie liked what he heard and worked with the group in recording sessions from January to March 2015.

"He was a wonderful person," says McCaslin. "He made me feel at ease right away. It's not easy to do that because he's not just a rock star, he's a cultural icon. But he couldn't have been warmer."

It wasn't never a question of accommodating Bowie. "He wanted us to do what we do. When we started recording 'Blackstar,' the trust he put in us playing his music — it was a thrill."

Bowie had sent demos to McCaslin who created mini scores for each tune. Eventually he started hearing horn lines, counterpoint, and harmonies that led to orchestrations. His quartet got together and played through the songs before the sessions.

"There was already great chemistry in my band," says McCaslin. "To David's credit, he stepped right into that and started singing and playing guitar with us. I remember on 'Lazarus,' I was looking directly at him and feeling the energy and conviction he was singing with. It gave me chills."

Two days after "Blackstar" was released, Bowie, who had been suffering from cancer, died.

"It was really devastating emotionally," McCaslin says. "I was very upset and it was hard to navigate through everything." He knew Bowie was sick but, "he was writing new music and we were planning on making a new record. I don't think he thought of 'Blackstar' as his last record."

During the recording process, McCaslin had been concentrating on the music, not the foreboding words. "In retrospect, I think of that now with the mortality in the lyrics."

McCaslin's involvement with Bowie has expanded his audience, which now includes many Bowie fans. Signing CDs after gigs and meeting them has been helpful in processing all the emotion around Bowie's death.

"It was such a privilege to meet so many people who loved him so much," McCaslin says. Now his own shows are linked to Bowie.

"There's always a Bowie component, and it's most often 'Blackstar.' I love his music, and in this last year and a half, I've found different tunes that I love to play and I feel are meaningful and a good fit for the band."

Donny McCaslin will perform Saturday, July 1, at Xerox Auditorium at Xerox Plaza, 100 South Clinton Avenue. 6:30 p.m. and 9 p.m. Tickets are $30, or you can use your Club Pass. donnymccaslin.com.