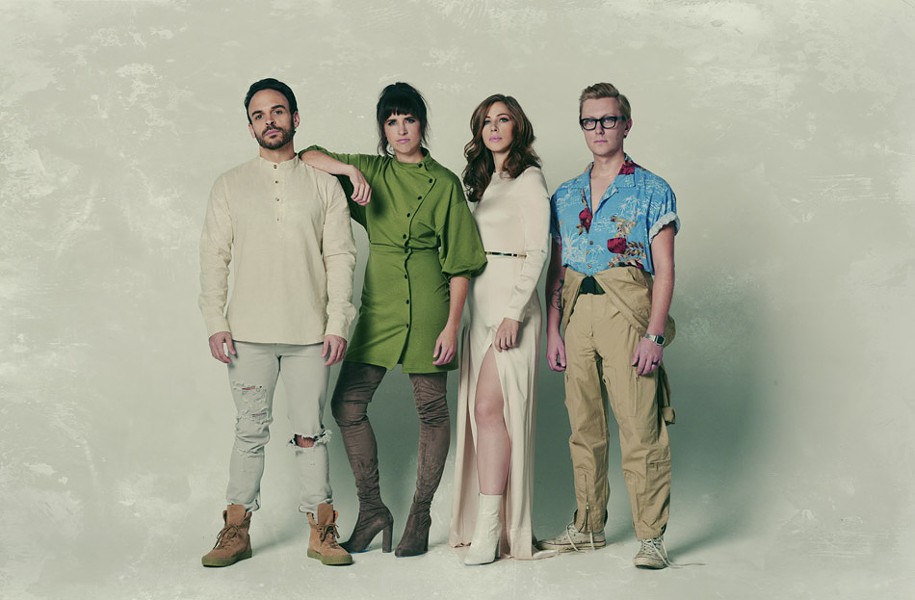 Six years ago, Lake Street Dive was touring like crazy but not getting much traction on the national stage. Then the band shot a video on a Brighton, Massachusetts, street corner and put it on YouTube. The video captured the exuberance of the four musicians performing the hippest version imaginable of The Jackson 5's "I Want You Back."

The video went viral and so did Lake Street Dive.

"We went from having nobody at our shows to having sold out shows," Price says.

Reinventing old pop tunes is just part of the fun of Lake Street Dive, whose name comes from a dive bar-filled street in Olson's hometown of Minneapolis. The group's originals, like "Good Kisser," have an energy and spirit that's simply contagious.

There's another video that's quite revealing about Lake Street Dive: It shows Price singing "Dedicated to You" at the age of 12. She was already a force to be reckoned with.

"I always knew I wanted to be a performer," Price says, "but it was when I was about 15 that I decided I wasn't going to pursue anything else but music."

That pursuit took her to Boston's New England Conservatory, where she met Kearney, Olson, and Calabrese.

"The great thing about the jazz program at NEC is that while it is mostly people who were astoundingly great at music, they're also very open to raw talent," says Price. "I couldn't really read music and I didn't have much theory training but they still let me in."

The group was unusual when it began in 2006 because there was no guitar or piano in sight.

"We didn't have a chordal instrument when we started the band, and that sound still pervades what we do," Price says. "Even though 'McDuck' is now playing electric guitar, the basis of how we arrange, which is sparse, using background harmonies to thicken up the sound, remains.

"We were in music school, so the weirder the better. While we have shed a lot of that, it still serves us really well in that the sound continues to be unique."

Lake Street Dive's quirkiness is evident in a series of Halloween videos made over the last 8 years, in which the group usually dressed like other two girl-two guy groups, including Abba, The Mamas & The Papas, and Fleetwood Mac. The band outdid itself in 2015 with a cover of Queen's "Bohemian Rhapsody."

"We weren't sure if we could continue the Halloween videos every year, so we decided to do the most ambitious song possible," Price says. "We had a specific way of learning that because it's so difficult. It took 20 straight days.

The band likes to learn covers to inform its own songwriting, says Price, whose favorite singer is the late Donny Hathaway. "It's really fascinating to take a song and take it apart and then put it back together in a new way. Then you figure out how strong the foundation of the song is.

"Sometimes you learn a song and you realize that when you put it in a different instrumentation or you slow it down or you change it up, it doesn't actually work. But a truly great song, if you rearrange the parts but you keep certain foundational elements there, the song will still really shine."

While their covers are strong, the band's albums feature original songs by all four members. "The covers serve a great purpose especially when you're hearing a concert of new material," Price says. "They're going to be sort of a relief, something familiar that you can sing along with. We'll always play those but primarily our originals will always be the focus.

"A song like 'Good Kisser' was tailor made for Late Street Dive, but we write songs not necessarily for the band because we also want to expand the sound. So everything gets a fair shake. If someone brings a song and it's somewhat out in left field, we're going to try playing it and see if we can make it work. At this point the other people in the band have my voice in mind when they're writing a song."