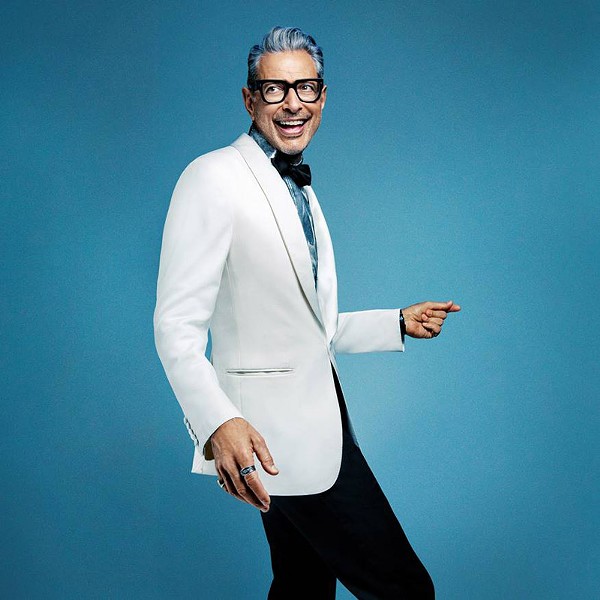 When you're known for being chased by dinosaurs and being turning into a giant fly, it's inevitable that you'll have to do the rounds: going on press junkets, shaking babies, kissing hands, and hocking your latest wares -- in this case, a jazz recording.

Jeff Goldblum, the actor and Hollywood bon vivant found himself on the Graham Norton Show about a year ago, doing the standard media song-and-dance for the movie "Thor Ragnarok." This is how it all started.

"The wonderful people at Decca saw me on the Graham Norton Show playing piano with Gregory Porter, and they thought it would be a good idea if I did a whole album."

As an astute pianist with an equally astute band  known as The Mildred Snitzer Orchestra, Goldblum has recently released  "The Capitol Studios Sessions" --- a salacious swan dive into 1950's Blue Note jazz, and classic standards of that era and ilk.

The music on "The Capitol Studio Sessions" detours around vintage camp without sacrificing the fun. The singers Imelda May and Haley Reinhart sing, the band swings, and Goldblum, well, goldblums -- punctuating the proceedings with humor, a sort of faux disbelief, and syncopated, Thelonious stabs of color. Goldblum digs the comparison.

"I'm no Thelonious Monk," he says. "Who is? I listen to him a lot. He's angular and muscular and surprising and pioneering and unexpected. I think he's just great."

Goldblum has been wild about the piano since he was a kid. Decca didn't have to ask twice. "Piano has just been that thing that I've always been crazy about," Goldblum says. "I found myself playing in cocktail lounges when I was 15 in Pittsburgh, and always had the piano with me."

Goldblum incorporated his musical skills sporadically while performing in plays and shooting movies, until about 30 years ago, when he began playing with a band in Los Angeles. So clearly it didn't happen overnight. It's just that he was pushing the acting stuff, with the music poking its head in to clarify and clear up any doubts.

"Now I'm at a fertile and interesting period of my acting career, as it happens," he says. "I'm kind of a humbled student and I'm a late bloomer, and I think I'm on the threshold of my best stuff, acting-wise. But the whole piano thing came together very quickly and we did it."

Goldblum and The Mildred Snitzer Orchestra are about to make a follow-up album, and they've increased touring, in addition to their weekly residency at Rockwell in Los Angeles.

"It's a mix wherever we go," he says when pressed about his audience. "But people seem to be interested in what I've done in movies in certain ways. Sometimes we have the privilege and responsibility of introducing them to classic jazz writing and our rendition of it."

But whether or not it could spearhead another swing-lounge-exotica movement remains to be seen. "I wonder, Goldblum says. "I'm no historian. I don't know. But I know people show up for what we do."